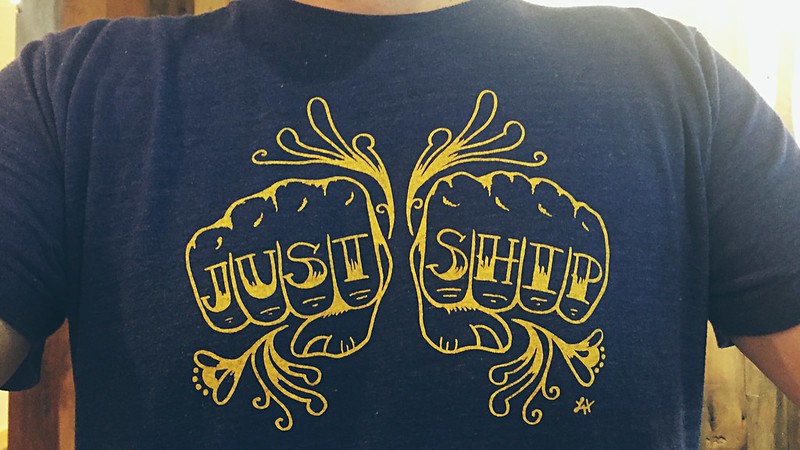 in the process of launching 4 new things. one of them ( which will be A Very Big Thing ) is being produced for the first time next week. this is my subtle communication to the launch team.

the t-shirt from kellan comes in handy at times like this. over-the-top if i wear it everyday until it ships? yes i did just coincidentally write a post on the day after christmas about on the origins of the myth and metaphor of santa claus and the relationships between santa claus, the norse god odin,tolkien and the “the hobbit while wearing my fantasy football t-shirt which features a tolkien-esque conception of a odin/gandalf character playing football.

i guess i now have to wear the t-shirt with odin when we go to see “the hobbit: the desolation of smaug”.

and i suppose i should go back and read “metaphors we live by”. with all the talk about the PRISM surveillance program, i recalled that somewhere i probably still had an interesting t-shirt buried in a box from my days around 1998-2000 when i worked for a large technology company that happened to be a member of something known as the microelectronics and computer technology corporation (mcc) which was as wikipedia correctly states, “the first, and – at one time – one of the largest, computer industry research and development consortia in the United States.”

mcc developed a variety of “precompetitive” intellectual property and technologies for consortium members who would then take them “in house” for commercialization. one of the technologies developed by mcc was known as the infosleuth agent system which was meant to “provides a unifying framework for selectively and dynamically leveraging and combining fuctionality provided by disparate classes of systems”.

three guesses who would be interested in that. the first two don’t count.

sure enough one project members was working on a large-scale distributed traffic monitoring system that “was couched as a massive distributed subscription & notification problem”.

i was always amusingly fascinated by the similarity between the infosleuth agent icon and the logo for the seminal german industrial band einstürzende neubauten.

i was in austin in 2000 when mcc disbanded and the various consortium members heard final project updates. the infosleuth folks made these delightfully creepy t-shirts that gave away the champions of much of the precompetitive infosleuth work.

“there is always a battle between good and evil agents.”

that was a long time ago, and i’m sure there been lots of work done since then ( e.g. see this ) but the infosleuth page is still up on a site for a wholly owned subsidiary for telcordia ( formerly bell communications research ) which has changed hands a few times over the years but was a mcc member and certainly is no stranger to developing information systems for very special government sponsors. it makes me wonder if there’s some small piece of infosleuth living on in PRISM. one of the great things about losing a hundred pounds? being able to dig through the box of really old awesome shirts that you haven’t been able to wear in 15 years. like this one from the summer of 1996 when i did graduate invertebrate molecular neurbiology research at friday harbor labs in lovely friday harbor on san juan island.

i remember distinctly that the shirt was just a titch too small when i first got it and that i should probably lose the 10 pounds i gained while eating and drinking merrily with the raucous international crew of molecular biologists. somewhere i have some great photos and even better stories that need to be told about that summer. relatedly, i also (hazily) remember coming really close to getting the image on the shirt tattooed somewhere on my body.

if jessamyn west tells me that she visited friday harbor in 1996 i am literally going to hum “it’s a small world after all” all day long. 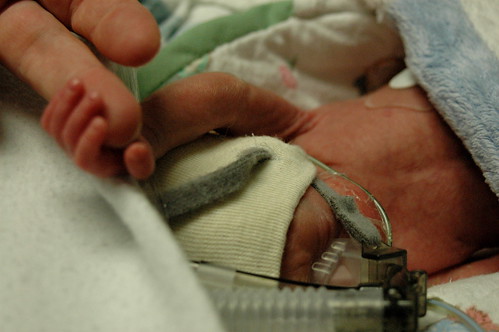 yowza. even after getting a dose of lasix, which is a diuretic meant to help his get rid of the fluid that he was retaining after the transfusions, eric weighed in at 978 grams or 2 pounds 2.3 ounces, which would seem to indicate that his weight gain over the past few days was more “real” than not. yeah!

after a cluster of alarms in the morning, eric had a quiet afternoon and then started up with them again in the evening. though he “only” had eleven a’s and b’s by the time we left, they were disturbingly “deep” in the evening, requiring a lot of effort to get him “jumpstarted”, necessitating a big jump in ‘oooooohs’ ( supplemental oxygen – remember, anytime they increase his ‘ooooohs’ he’s at an increased risk for eye problems down the road. it’s all so very, very connected. ). at a certain point i was left wondering if it might be best to just put him back on the vent to give him a rest. and we noticed before we left late at night that he was starting to use his intercostal muscles, which are the muscles lying between ribs, during his breathing; it might seem like a minor point, but it means that he’s he’s getting quite tired, and trying to recruit more muscles to help him to breath, which only makes him more tired. his nurses were still holding out hope that he’d settle down over the night, so i guess we get to play another round of The Waiting Game. 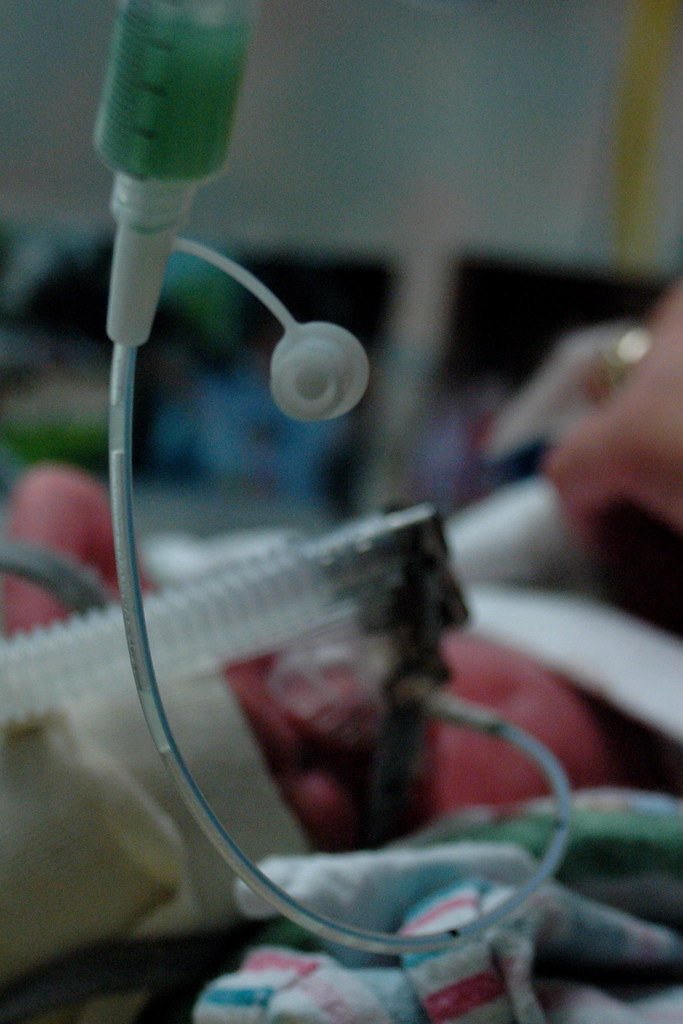 at one point i was able to capture one of those special nicu moments that involves bile, poop and breathing. the syringe is filled with a mixture of undigested milk with a little bile, which is what gives it a green tint. the tube gets filled when he refluxes fluid back out of his stomach. there are a number of reasons why he might reflux , one of which being that he might be trying to poop, which is why kris is checking his diaper.

if he struggles to poop, he’ll put too much pressure on his abdomen and force the contents of his stomach up into the tube.

besides being slightly gross, the pressure will also affect his vagus nerve which will slow his heartrate and breathing, resulting in bradycardia or apnea – which is exactly what happened right after i took this picture. 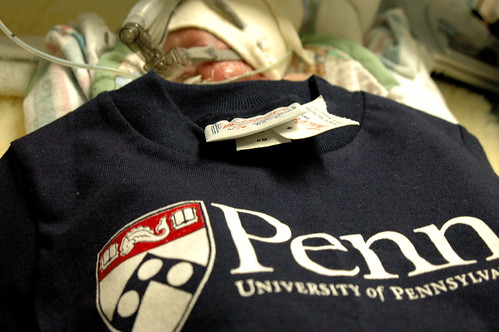 amongst the postcards we received today, we also were happy to find a toddler t-shirt from some of eric’s new friends who are attending penn. i doubt they have micropreem cloths at the penn giftstore so they sent him a 6 month shirt for a full term baby.

as you can see, it might be awhile before he’s able to wear it.

thank you very much melody ( and your roommate too! ). i can’t hardly wait until i can take a picture when it fits him properly. it’s astounding to think that complete strangers have gone through all the effort to send him such a gift and words really can’t describe how touching we find the gesture.

we also received a bunch more postcards today. it means a great deal to us to be able to walk into the nicu and read everyone’s supportive postcards. i need to get my act together and find a way to show everyone where all his cards are coming from. special thanks go out to adam and johanna who are friends from california who appear to be traipsing around california and sending postcards from los angeles to sonoma to san francisco. eric IV enjoys each and every one of them ( as do we, of course ). thanks! 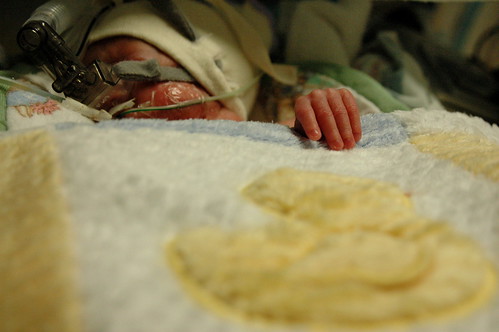 later in the evening we would get the chance to put him under a super soft blanket that some friends gave eric when he first arrived in the nicu. the nurses all commented on how comfortable he looked nestled in it. it’s big enough that i think he’ll be able to enjoy it for his entire stay. he seemed to like to rub his hand against the plush border of the blanket. 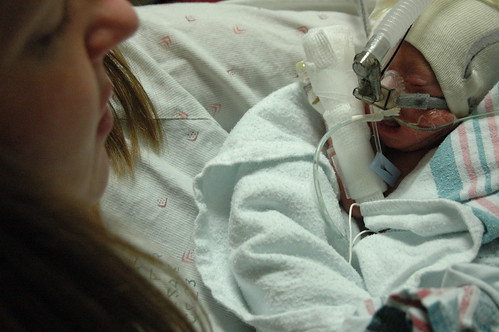 after a tough day, eric enjoys being held by kris. it’s not quite as good as kangaroo care, but it’s good enough.

much, much later in the evening ( o.k. really, it was early, early, early the next morning ) we called the nicu and eric had finally settled down with his alarms, so it looks like we can sleep relatively easily.