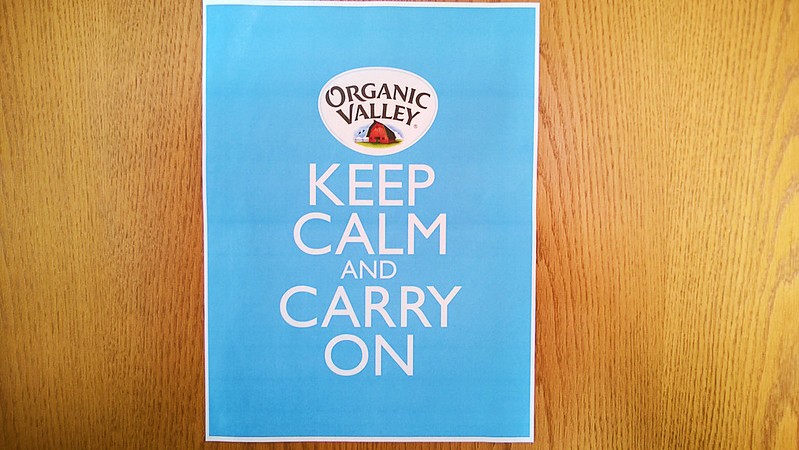 after the fire at organic valley hq, i made this sign. even though the internet meme is all played out, it still makes me smile. good words to remember after the fire and several other challenges. after playing offense and scoring a goal, odin is back on defense while playing against la crosse who they’ve beat once and lost once in overtime. “maintain your self control.” easier said than done!

as one does as a hockey parent, i sat in the opponent’s penalty box. it offers a great view of the game. you’ll note, there’s a player in the box. i have to admit it was a bad call 🙂 odin moves the puck down the ice. viroqua had more shots on goal but their goalie was too good and they lost. la crosse is conference 3 team ( viroqua is conference 4 ) so they should feel proud at beating them once and almost beating them again in overtime in previous games 🙂 i was next door to the the just burgers & more in escanaba, michigan and wondered about their name. i can understand that maybe over time being “just burgers” wasn’t enough and they needed to provide more variety and wanted to change their name, but doesn’t “more than just burgers” make more sense?

in the many, many times i’ve been to esky, i’ve never eaten there so i comment on their food. maybe next time. this sign was visible in the vintage sign bin at our local hardware store and it quickly caught my eye, with the gun and the crazed/fearful? folks. i suppose i was thinking about tragic sandy hook elementary school shooting when i stopped and took a long look.

try as i might i couldn’t figure out what the saying in the sign was supposed to mean. is the gun wielding dude and the woman in the sign the “stupid people” you shouldn’t underestimate? or are they protecting themselves from the stupid people? some folks from organic valley went to the east coast after hurricane sandy and took a bunch of cheese and all the bread from the cafe on their way out town to make hundreds of grilled cheese sandwiches. of course, temporarily not having any bread was a very small sacrifice ( and all the more so for me since i try to lead a pretty much mostly gluten free lifestyle ).

every time i passed the sign in the cafe, i couldn’t help but hear neil from “the young ones” exclaim “we haven’t got anyyyy breaaaaad”. weird how your brain works. it’s been nearly 25 years since i first saw the episode and i still imitate neil if i’m out of cash ( or bread ) and almost nobody gets the reference. i’ll admit that i’m a bit confused by the sign. does it mean you donate just the deer hide for the food pantry? or the whole deer? i assume they mean the whole deer, but why specify the hide? ok, i know reefer can mean refrigerator truck, but i’m pretty sure the most folks probably think of the urban dictionary definitions first and probably aren’t aware of the refrigeration reference ( wouldn’t it make more sense to spell it refir? ).

i wonder how many applicants try not to break out laughing when asked how much previous reefer experience they have.