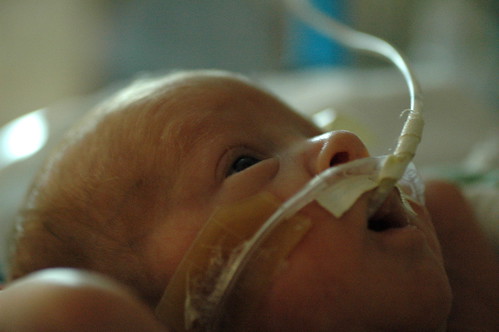 today was a relatively quiet day, with nary an alarm and only the occasional, normal “desat” ( lowering of the percentage his blood oxygen, which is associated with bradycardia and apnea ) that he seemed to be able to pull out of all by himself. he put on about an ounce and tipped the scales at 3 pounds, 4.7 ounces or 1495 grams; also, he’s an astonishing 41.5 centimeters or about 16.33 inches, which means he’s added over an inch to his length since the last time they measured him, and he’s over 4 inches longer than his birth length!

unfortunately, we discovered that eric’s conjugated or “direct” bilirubin levels are rising, which is cause for some concern and eric will get increasingly jaundiced, if the cause is not discovered. it might sound like eric is just having another bout of the physiologic jaundice that all babies can get which can be fixed by phototherapy, but unfortunately things are not that simple.

the two types of jaundice have different causes and different treatments. the good news is that we’re probably seeing the result of eric’s liver getting “sludgy” ( the neonatal nurse practitioner’s term, i swear ), which is not too uncommon after switching back and forth between intravenous feeds and breastmilk ( which is what has happened to eric ); if the cause really is eric’s sludgy liver then we can expect the issue to resolve itself after he gets back on full feeds. but there are also many other less fun things that can cause higher levels of conjugated bilirubin and they are currently trying to rule those out. he’ll have an ultrasound of his liver sometime during the night and they drew a bunch of blood for a panel of liver function tests, but we won’t know the results of those tests for a couple of days.

if it’s not one thing, it’s surely another in the nicu.

in most of the pictures of eric, there is an overhead light on that provides the ambient light. however, 99% of the time there is no light on because micropreemies like things dim and quiet. normally i try to time the pictures around eric’s regular interactions with the nurses, so i don’t have to turn on the light more than normal.

although having the lights on allows for easier picture taking, it will cause eric to squint in many pictures. but most of the time, he’s not squinting, but rather is looking around with big, round eyes.

today, the x-ray viewer was turned on, which provided just enough ambient light for me to catch a shot without eric quinting. he is relaxing and has is hands behind his head ( e.g. like here ) and is looking around with a look of wonder. 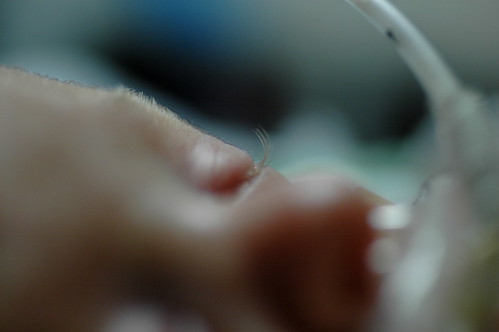 eric has enormous eyelashes, which me most certainly got from me. when i was young, i had a teacher that was convinced that i curled my eyelashes and wore mascara.

nope. no makeup was required, just the right genetics. 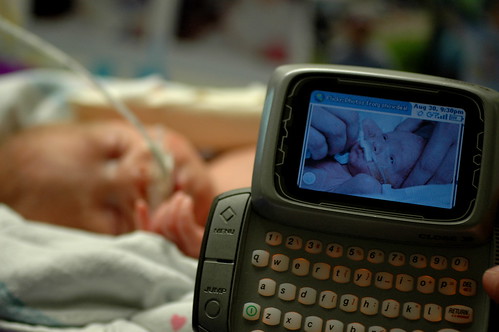 thanks to the fine folks at flickr and my sidekick, i have a really good answer whenever people on the street ask me how eric is doing and if i have any pictures in my wallet.

( don’t get me wrong, the original sidekick sucks in every other possible way and shouldn’t be used if you want anything resembling a reliable phone. but i guess i can’t say anything about the new model ).

perhaps you have never had the occasion to try out the site on the small screen, but a lot of hard work has obviously gone into getting things to work quite smoothly.

incidentally, cell phones are banned in the nicu, but i believe the banishment is for social and not technical reasons, since you can often hear civilian’s cell phones going off ( i.e. someone in the area probably always has a phone on and it doesn’t cause any problems ) and some of the hospital staff ( respiratory techs in particular ) take calls on cell phones while they are in room. so, while i don’t take calls, i’m usually available for instant messaging or answering flickr photo comments. 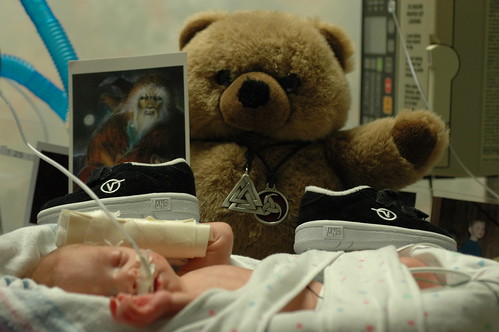 i forgot to take a photo yesterday of some of the nice gifts sent by my sister that we gave to eric on his second lunar birthday. the bear makes a wooshing womb sound that is supposed to be soothing for babies. and he’s wearing necklaces with the symbol for “odin’s knot”, which is quite appropriate since eric is otherwise known as odin. she also sent a couple of blank postcards with the the original odin on the front. oh, and there was also a pair of vans. it might be awhile before he fits into them, but we’ll surely keep them around and get a picture of the event.

you can hear the sound the bear makes by watching this movie.