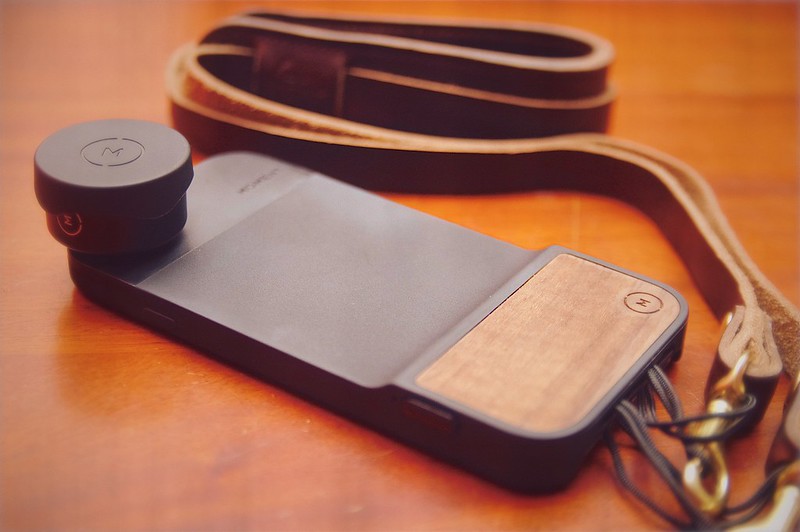 yes i’ve been enjoying my new moment wide lens, but i learned really quickly that not ordering a $5 lens cap was a big mistake as i’d constantly have to clean the lens and would fret about scratching the lens.

the lens cap shipped and arrived in just a few business days before i leave on a trip! hurray!

i haven’t decided if the strap looks super dorky. i guess it’s about as dorky as wearing a DSLR around my neck which i’ve been doing for decades. the iPhone and lens combo is slim enough to slip behind your coat so that’s an added advantage in addition to keeping it at the ready.

just a few days after i wrote, “i suspect my camera bag in the near future will be filled with lenses that compliment and extend the capabilities of my smartphone,” i ran across this wonderful photo shot by grant hutchinson with a qx100 which retails for about $500. and then i find this incredible kickstarter project for “moment” lenses with, “..optimized multi-element designs using the same recipe in designing professional cinema glass for HD film…” which will retail for $99. project out 3 years and the full body “prosumer” dslr is getting devoured on both the high and low end.

i was just talking to someone about digital cameras and said i was thinking about not replacing my aging d70 with another dslr and they looked at me like i was crazy. but using my lumia 928 – which is a remarkable camera ( with a stellar “pro” camera app ) saddled with an unremarkable operating system – you can see clearly the author’s conclusion that smartphones are rapidly evolving into premium, prime-lens compact cameras that rival dslrs in many respects and that “…many of their limitations will disappear in a few short years with zippier processing. Only their fixed lens remains as an Achilles’ heel…” ( the gap will close faster than the authors conclude ) and that’s why i think i’ll probably hold out a bit longer for smart lenses like the Sony QX10 and QX100. i suspect my camera bag in the near future will be filled with lenses that compliment and extend the capabilities of my smartphone. i hope nikon is there because i still love, love, love nikon glass. update: now that i think of it, why not a “smart” box with a sensor in it like the sony QX10 that works with existing nikon glass like the wonderful nikon 50mm f/1.8? [ via ] update coincidental post from kottke, “Goodbye cameras, hello networked lenses”

none other than marco arment laments the realization that the photos he’s taken over the past two years with his iphone look like junk when viewed on screens larger that 3.5″ and really don’t hold up on large, high-density screens like the retina display. when compared to how his dlsr photos have held up, the difference is so pronounced that he’s switching back, or at least attempting to be more conscious about using his big rig to future proof his photos. good choice, since optics/physics fundamentals dictate that camera phone photos will always be limited to looking good on smaller, lower density screens. there’s just no away around it. an interesting conundrum for handheld hardware manufacturers who are simultaneously pushing larger, higher density displays. 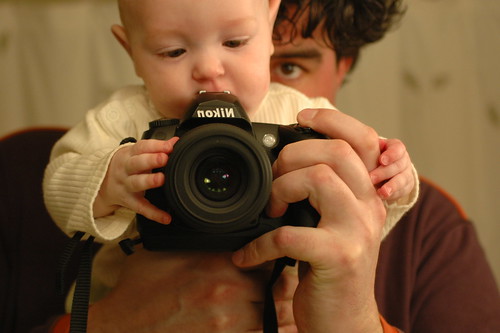 so, i’m trying the ol’ bathroom mirror portrait trick, but my grand plans are foiled because instead of being tricked into looking into the camera reflection in the mirror odin was was quite happy to play with the real camera in front of him. i was hoping that he would accidentally hit the shutter button to snap a photo, but mostly he just fiddled with the knobs and mouthed the SLR eyepiece. with a bit more apprenticeship, i’m sure he’ll be be ready to begin the process of taking over as family photographer.

actually, at first the camera was off to the side as i was attempting to get a picture with both of our faces in the frame, but that resulted in multitudes of shots of him lunging for the camera while i precariously balanced him in one hand and the camera in another. so i compromised and put the camera front and center which means you’ll have to wait a little longer for a proper portrait of him and me.

really, i am slightly less camera shy than i appear. but only slightly.