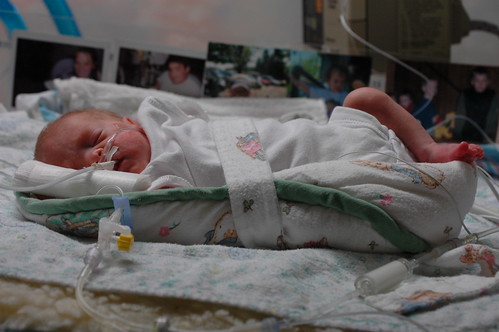 sniff. they grow up so fast. it’s hard to believe that it was on day 26 that eric received his custom bedding and he looks like he was swimming in it on day 28. but now, he’s so big, at 3 pounds 8.3 ounces or 1595 grams ( yes, he gained over two ounces in 24 hours ) that he can’t fit in his bedding anymore! we decided to give his bedding to some new neighbors who just arrived with a 24 weeker. we remembered how nice it was to have his own bedding from a thoughtful stranger, so hopefully in some small way, it’ll help the new parents transition into the nicu and their own long road ahead.

one of the nurses told us that during “rounds” today the neonatologist commented how very happy he was with eric’s progress and that he thought he had “turned a corner” and was looking very, very good lately. it’s going to be quite difficult to manage our expectations in the coming weeks now that we know that he, himself is being so optimistic – all the more so because the nurse said that he never makes predictions.

as i mentioned earlier in the week, he is looking increasingly pallid as the days goes by due to his decreasing amount of hemoglobin in his blood, which means he is getting closer and closer to needing a transfusion. for a variety of reasons our neonatologist lets hemoglobin run down farther than perhaps is done in other nicus, in an attempt to see if babies can increase their production on their own. often he’ll even go so far as to let the alarms start to increase before he’ll begin another transfusion, so i guess i’d expect to see the rate of alarms pick up over the next few days, due to the decreasing number of “boxcars” ( nurses term for red blood cells ). while he doesn’t seem to be alarming more than usual, his supplemental oxygen is gradually being increased, as a consequence of his decreased oxygen carrying capacity. 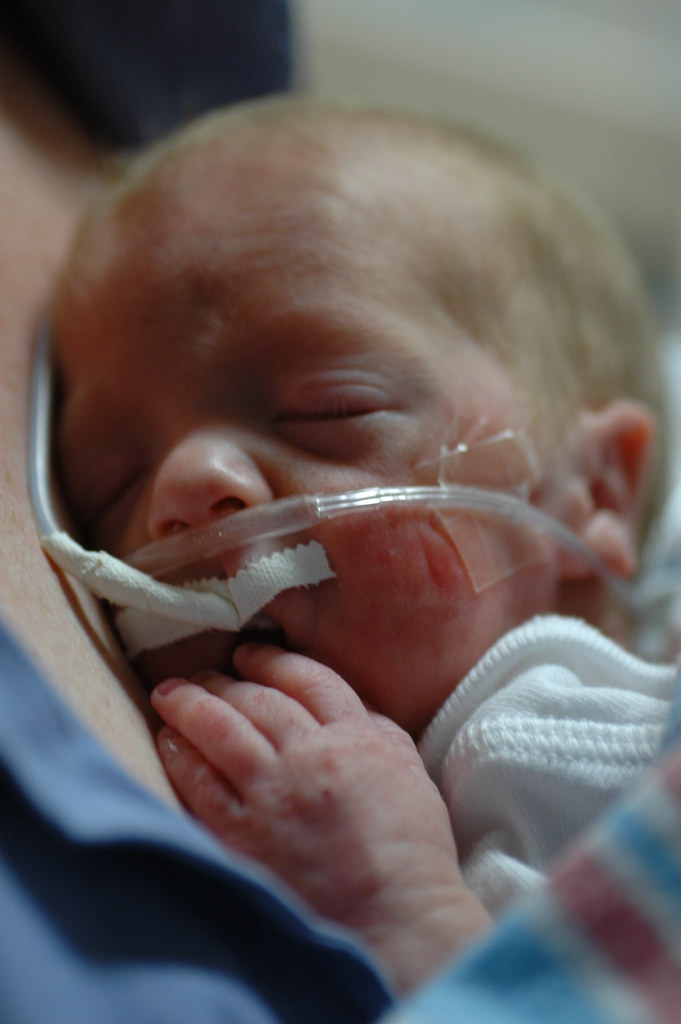 i like to play games with the nurses by “forcing” them to guess when they think certain events will occur, such as when eric will get his transfusion. normally the nurses hate answering the “when do you think such and such will happen game” but i make it so much fun to play that most of them eventually play along ( in fact, i believe i may have developed quite a reputation for being able to cajole normally retrained nurses into playing ). being the veterans that we are, they know that i don’t really believe a word that comes out of their mouths and that it’s just a way to pass time. today, eric’s day nurse was quite sure that eric would get the transfusion tommorrow. or, i think it might be more correct to say that she was advocating that eric get the transfusion so that he could get it done before he goes to “full feeds” and is therefore be able to get rid of his intravenous line that much sooner ( i.e. if he went to full feeds before he got his transfusion, they’d keep his IV line in for the impending transfusion, which she was presumably trying to avoid ). however, eric’s night nurse laughed at the speculation and said that maybe the day nurse didn’t work in the same nicu as she did. the day nurse was still talking with us at the time, so it was all in good fun and i got they impression that they were gently expressing their impressions of the neonatologist’s transfusion policy. 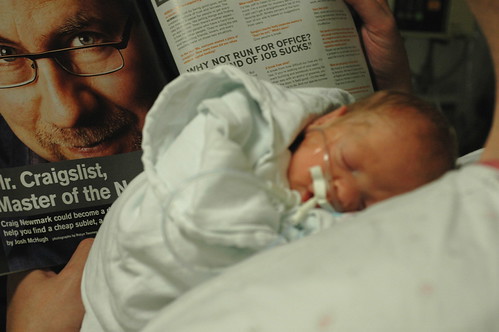 in addition to playing games with the nurses, we stuck to our increasingly normal routine of holding and kangaroo care, with and afternoon bath from kris and reading from both of us. tired of all the other reading, i decided to read to him about “mr. craigslist, master of the nerdiverse”.