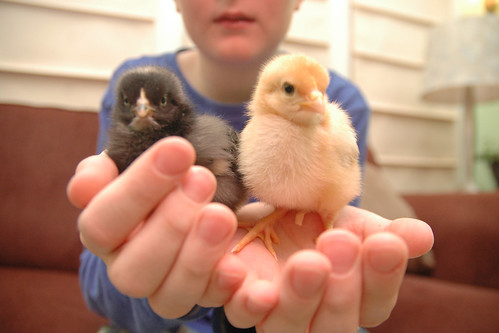 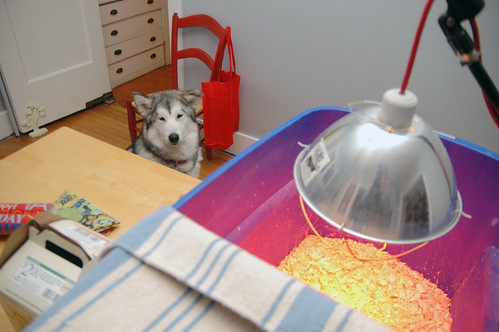 after we sent the last flock to a nice amish family we thought we’d get some new chickens soon but then frida came into our lives and we decided a new puppy and new chickens was a bit too much to take on at the same time.

so we decided to wait until spring had sprung knowing the down side of waiting until frida was older was it would be that much more difficult to teach her the chicks were not actually food, despite what all of her instincts were telling her.

the local tractor supply store had some chicks for sale this weekend and we thought it was as good a time as any to pick up a few and start her training.

i have to admit i was not very optimistic we’d have much success, since malamutes have a strong prey instinct. the chicks are spending their first couple of weeks in a bin on our dining room table under a heat lamp and while frida hasn’t jumped up on table, she hears their peeping and looks at me like she’s wondering when i’m going to give her a snack. 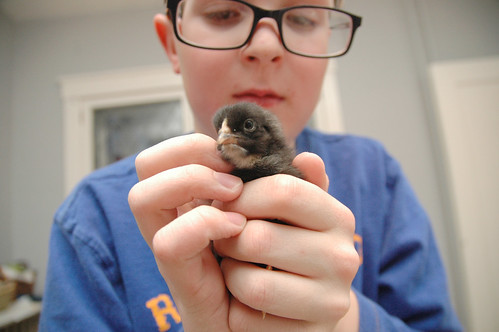 basic training at this stage involves getting frida used to the chicks by putting them next to her snout and telling her “no bites”. when she doesn’t attempt to bite, she gets a treat! odin is a big helper and after years of training knows how to make the chicks feel safe. or at least as safe as they’re going to feel when put next to the snout of a canine! 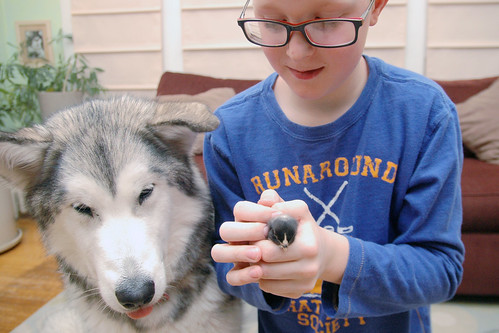 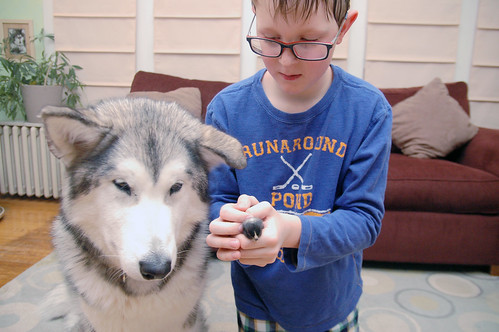 after a looooooong 30 seconds or so of doing a great job of not attempting the eat the chicken, frida finally got a treat.

i think it took a lot of effort on her part. 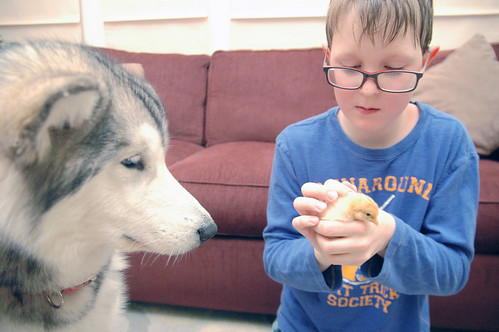 odin is doing a tremendous job here as well, calming both the chick and frida. if he were to let the chick start flapping her wings or wiggle just a bit too much it would probably set frida into a bit of a frenzy. he’s both a dog and chicken “whisperer” 🙂 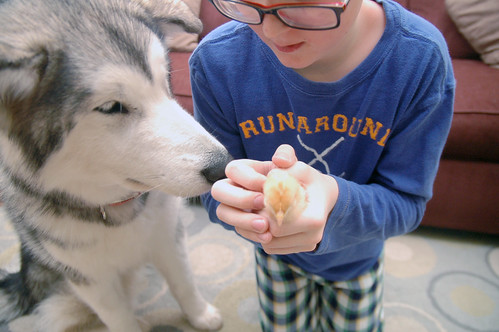 a super successful day of training! no harm, no foul. ahem.

i’m amazed that frida has come so far so quickly. we’ll see how she does after a few weeks when they’re running around on the floor with the early warm weather greening everything up, The Girls are out happily foraging around the yard looking for Anything That Moves. it’s really amazing to sit and watch them scratch and peck with what appears to be incredible specificity as they look for bugs and ticks and whatnot where the whatnot is most likely something creepy and crawly ( ’cause, you know, chickens are not vegetarians, right? ).

while guineafowl are often cited as the premier pest controllers, i think any poultry is going to do a great job at reducing all manner of pests in the yard and garden, including dreaded deer ticks which carry lyme disease which has a high prevelance in southwest wisconsin.

with the mild winter and and warm spring i’ve been hearing a lot of reports of people finding deer ticks in town on their animals so i like to imagine The Girls are eating every last one of them as they excitedly run here and there through the yard.

in fact, if you’re in an area with a lot of deer ticks, i think it’s your duty to keep backyard chickens. i think someone should update the uncle sam expects you to keep hens and raise chickens poster to say “two hens in the back yard for each person in the house will keep a family in fresh eggs and keep the deer ticks away!”