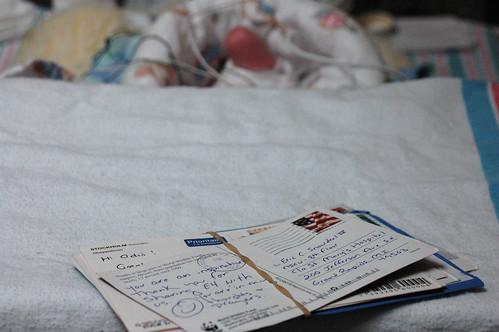 i like the fact that the most exciting thing to report today was that we got a bunch more postcards in the mail! woohooo! and my family should be ashamed for allowing complete strangers from all over the world to get eric’s postcard in the mail before they did ( actually my sister candy did get her postcard in the mail fast, but not faster than somebody in santa clarita, california ). thanks again ( and i’m just kidding about the family comments. maybe. 🙂 ) – perhaps the next two and a half months can simply be daily shots of his new postcards. perhaps i can find a way to help you all visualize where they are coming from, with a webified map of the world and a link to a scan of the postcard. see, isn’t that much more interesting than knowing that eric is doing so great that they’re going to experiment with putting him on the nasal cannula all day today? i don’t suspect that he’ll be off the cpap forever, but he does enjoy proving everyone wrong, so who knows.

it occured to me today that some of you might consider august 4th to be his one month “birthday”, at which point i thought it was funny that kris and i both consider yesterday to be his one month birthday, since it was 4 weeks after all and with micropreems gestational milestones are often measured in weeks ( 32 weeks for a suckling reflex, etc ), so it’s just easier to keep a record of weeks, rather than gregorian months; and that’s why we’re going to make it difficult on everyone and keep following a lunar calendar month instead of a “regular” calendar month.

curously, as we were talking about moons, lunar calendars and marking off gestational ages ( of course, you all know that the menstrual cycle is a 28 day cycle too), both of us remembered that it was a full moon yesterday. or something quite close to a full moon. which means it was a full moon on the fourth of july! and, of course, it’ll be a full moon in 28 more days on his second month birthday. neat. i wonder if there’s a link between preeclampsia and full moons joking. mostly. sort-of.. you’d think that he’d also have a full moon on his first “real” birthday, but that doesn’t seem to be the case, if the lunar calendar i linked to is to be trusted.

conspiracy theorists might think we planned this all out ahead of time, given that the full moon features so prominantly in the norse creation myths ( i’d guess that the full moon probably is a common thing to talk about in all creation myths ) and that we decided to call him odin. but remember, i’m an adherent to littleton’s law and the power of a good story. most of the time.

in any case, eric’s monthly “birthdays” will henceforth be officially observed every 28 days until further notice ( at least until we stop paying such close attention to weeks and “age adjusted” milestones ), so double check and make sure we’re celebrating on the same day!

update: some good news and some not-so-good-news-that-isn’t-horrible. first, eric is packing on the weight. he gained more than two ounces today and weighed in at 1 pound 15.3 ounces! amazing! he will most assuredly hit the two pound milestone in the next day or so. w00t!

also, he did have to go back on cpap this evening and the nurses noticed that one of his lungs sounded like it was not expanding and contracting as it should be; they weren’t overly concerned about it, but they are going to give him a chest x-ray tommorrow to make sure there isn’t anything bad happening. there are innumerable, innocent reasons for why his lung might not be acting as it should, and a couple of bad reasons that they want to rule out. so we’ll be hoping for the best over the next 24 hours.

there’s also a small chance that he might be developing a hernia. or maybe his testicle is descending ( i’m not kidding, they really can’t tell it’s a hernia or a descending testicle). a hernia would be not-so-good since he would need surgery which would necessitate him getting transferred to a different facility in town. and we really like his current nicu, so hopefully it’s not a hernia.

aaaaaaaand. on our nightly dog walk, we were telling the “full moon” story to a neighbor and they commented that they thought that the recent full moon was a “blue moon”! however, upon futher investigation, it looks like eric’s “lunar birthday” is just shy of the full moon, blue moon or otherwise. so conspiracy theorists can rest easy.