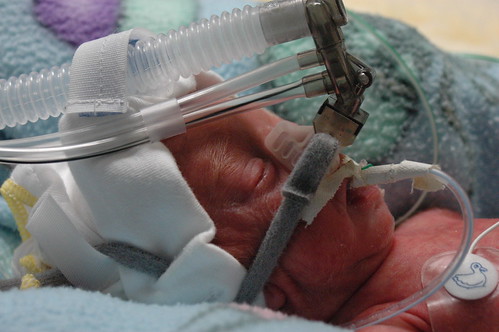 it might be a little difficult to tell from the photo, but eric is a bright shape of red today. all those new red blood cells from the two transfusions yesterday are working their way through his system and doing their magic.

there have been a bunch of new admits in the nicu over the past 36 hours and the place is packed, with even more hustle and bustle and commotion than normal. it’s a small nicu with only about 15 beds. if i’m not mistaken, there’s only one bed left.

we see many scared and sad faces and it’s tough to revisit the feelings that we know they must be feeling, as a few of the admits are quite sick. the nurses are slightly more harried ( certainly to be expected ) so the ‘tone’ of the nicu has changed a bit. and while eric is in no way being neglected, it still takes the nurses a little longer to get to his bed if he starts to “sag” ( meaning his blood oxygen dips and stays down, but he doesn’t go into a full blown episode of apnea ). it’s hard not to feel ever so slightly ambivalent at the decrease in attentiveness while completely understanding the circumstances.

disturbingly, it appears that they might be having scheduling problems with some planned vacation time colliding with unplanned admits. we see all new nurses for the night shift and suspect that they might be pulling staff from the “bench”. later, eric turned from his ruddy red color to an ash gray during a prolonged case of apnea. while there’s nothing particularly notable about stopping breathing and changing color, it was unusual to have it happen while there appeared to be some confusion about who was his night shift nurse. oof.

and to make matters worse, the new nurse is abrupt and quick in how she handles eric. i’m sure this type of thing happens. people are human. but in the nicu everything is intensified. the seconds that tick by as your child turns ashen last an eternity. moments of brief confusion are amplified. 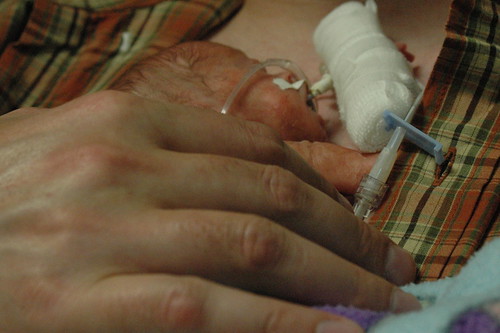 in less stressful news, i did find time for kangaroo care today. as usual, he was quite happy and they put his nasal cannula in during ‘roo time, which is less abusive to his system than the CPAP mask, so he was doubly happy.

and the nurses have started to give him 4 cc’s an hour of breastmilk through his “o.j.” tube which delivers it directly to his small intestine. over the next few days they will gradually increase the milk while decreasing the volume of his IV drip. at about 5-6 cc’s of milk they will have completely discontinued his IV and he’ll be officially getting “full feedings”. pooh keeps hearing the nurses referring to the the breast milk as liquid gold and mistakenly thinks they are talking about honey. 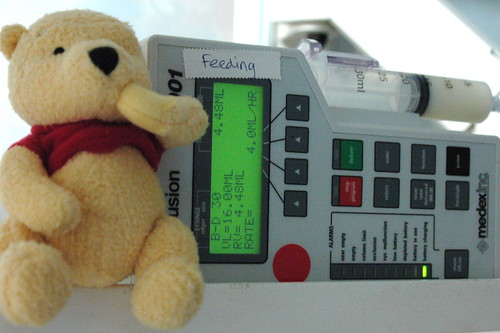 for the one or two of you who might be interested in the caloric needs of a micropreemie – the basal metabolic rate ( the metabolic rate required to simply maintain all vital systems ) of such a small baby is about 70 calories per 1000 grams of the baby’s weight. in order to maintain a steady weight gain, the doctors like to have the baby taking in about 120 calories per 1000 grams. since eric weighs about 700 grams, he should be getting about 84 calories a day. between his breast mild and IV feedings, he’s getting somewhere around 5.2 cc’s of food an hour which is about 125 cc’s throughout the day and that’s 4.2 fluid ounces a day.

both his breastmilk and the intravenous fluid give him something like 20 calories an ounce, which means he’s getting – surprise(!) – 84 calories a day ( 20 calories an ounce times 4.2 fluid ounces a day). which is exactly what he needs to keep him running, while allowing him to put on a bit of weight.