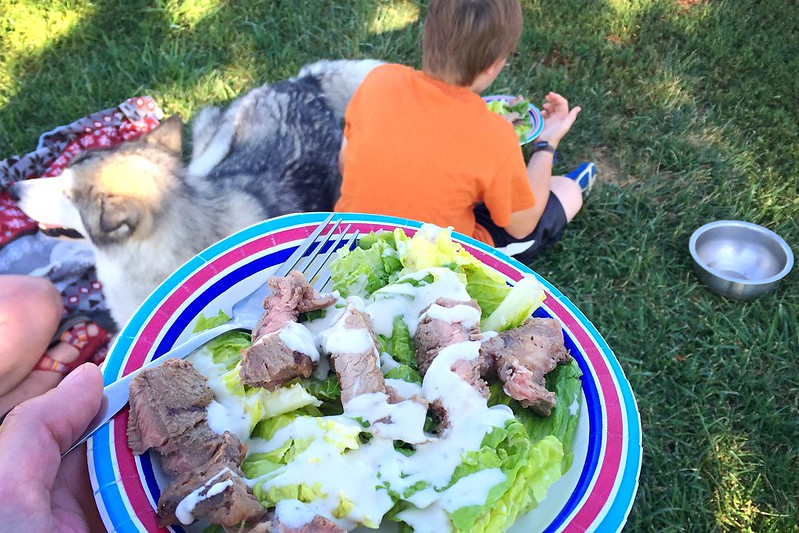 it’s not like we never eat fast food, but I love that odin prefers to eat the homemade steak Caesar salad we prepared for the trip and doesn’t even ask for fast food available at plaza. since fall is fast approaching ( or, rather, technically here ) that must mean halloween is not far away which means it’s time for our yearly trek to a local The Pumpkin Patch to search for the perfect pumpkins for jack-o’-lanterns.

it’s a seasonal ritual made all the more special this year because grandma and grandpa snowdeal came for a visit and got to partake in the pumpkin hunting fun.

the pumpkin patch we really enjoy has all sorts of fun stuff beyond pumpkins, including a barn with many different kinds of animals including very curious goats who like to nibble on anything they please.

odin isn’t quite sure whether or not he’s going to lose his whole glove to one particularly nibbly goat. i think the sheep would like to taste the camera. since we live in a small town it’s certainly not unusual for odin to run into a few friends who are on their own Pumpkin Patch Adventures. it’s mighty nice that the old tobacco drying barn has a slat missing that’s just the right size for posing. it’s all fun and games jostling around the opening, at least until the llama decides it’s time to stand up and leave everyone guessing as to whether or not he’s going to spit on you! this is gunner. he’s one of the nice folks who drives a group of pumpkin patchers to the patch in a wagon pulled by a tractor.

you know it’s time to leave when he blows in the horn.

he asked odin to look after his horn when he jumped into the tractor. see if you can guess what happens to the horn. and we’re off! gunner is happy to not look where he’s going and tell you all sorts of stories about the history of the area, including the fact that the very path we’re driving on was originally a horse and buggy trail that connected two nearby towns. since halloween is approaching you never know what spooky, scary stuff might appear on the trip. since odin is a seasoned veteran he knows to keep on the lookout. one year they had a gorilla jump out onto the trail which i think freaked too many kids out since they haven’t done it since. the ol’ riding the tractor like a bronco through “raging” stream bit never gets old.

every year, even though it never happens, i think there’s a small chance we’ll get stuck in the stream. it doesn’t take long to find The Perfectest Pumpkin that’s all the more perfect ’cause it’s easy to carry. and even the bigger ones are perfect when grandpa offers to help carry them on your head. odin poses in The Wilds of the Pumpkin Patch with his Prize Catch.

i almost think we should have it “stuffed”. grandpa and grandma caught documenting the adventure with their camera phones :-
) we were lucky enough to find a few gourds which was a treat because odin really, really though grandma would enjoy taking a few back home to michigan. back on the wagon, odin says, “hey grandma, how about how put the horn on my head like a hat. that’d be funny!” the request, i think, was all a set-up for his next request to put the horn on her head so he could could talk into it and she could tell him if it was loud.

to the bemusement of the rest of the wagon riders, she complied. what could be more perfect that a little picnic after pumpkin hunting? not much, expecially when the pumpkin patch place supplies brats and sauerkraut! of course, we can’t leave without saying goodbye to the goats! such a fun annual tradition, much better than just picking up pumpkins in a parking lot. highly recommended if you’re in the area.

“tucker and becky’s pumpkin patch” on oboe road off PC between highways 27 and 33.

amusingly, our Pumpkin Patch Adventures take place a hop skip and a jump away from odin avenue. in fact, i think we first stumbled upon the road when we went on our first Pumpkin Patch adventure.