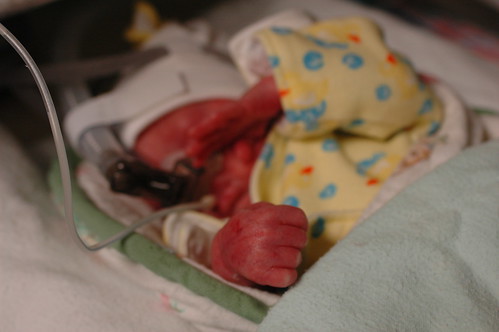 well, it looks like we’re back to having days where the biggest news came when we received 16 postcards all at once! i had joked with the staff yesterday that perhaps the mailroom got sick of running his cards up to the nicu and maybe there was a kernel of truth in the joke, since some of the postmarks were from 8 days ago. regardless, we finally did get them all and we’ll enjoy reading them to eric over the next few days. thanks again to everyone two has taken the time to send a card ( or two, or three! ). as always, it makes our day that much more special to be able to read eric postcards from all over the world.

in the above photo, as always, eric isn’t too subtle about letting you know that the lights might be too bright. 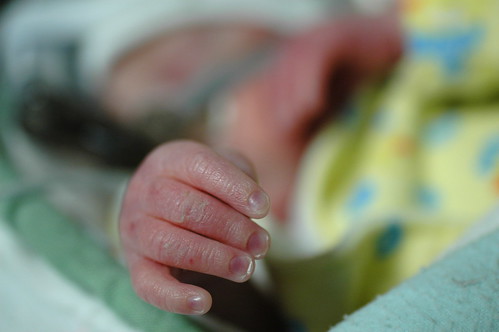 clinically, eric had a – thankfully – boring day. i forgot to mention that he didn’t have a single alarm yesterday and he would have kept the streak going today had it not been for a tantrum after his “eight o’ clock meanies”. at eight p.m. his nurses do the various things that nurses have to do and tonight he let us all know that he was none too happy with the situation. he got really mad and when he gets really mad he’ll decide that breathing isn’t too high on his priority list. the nurses have come to expect eric to be “naughty” ( a common nurse euphemism for when babies are being uncooperative ) at such times and don’t really count it against him on his permanent record.

eric is getting three cc’s of breastmilk every two hours and if he keeps tolerating the milk, i think it’s reasonable to expect that he’ll be back on “full feeds” ( meaning no intravenous fluids ) by the end of the weekend or early next week. obviously, with his gut shutting down last week, they are monitoring him very closely for signs of necrotizing enterocolitis. so far, all signs indicate that he’s tolerating the feeds quite well. 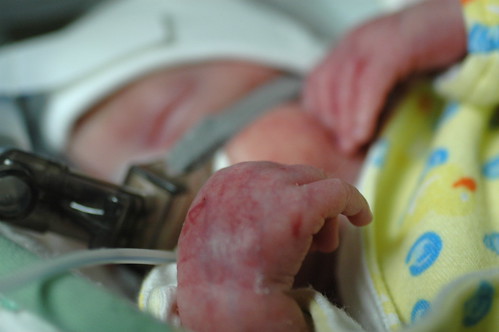 eric’s hands and feet were looking a little puffy, which partly can be explained by water retention as a consequence of the intravenous drip. however, his hands looked very puffy and likely related to relatively minor issues with his IV line. due to a variety of reasons he’s been having troubles with the line being put in his hands so after trying a few different locations on his hand they decided to move the entry point to his foot. in the end, they found a spot that seemed to agree with him, but not after leaving a few battle scars on his hands. 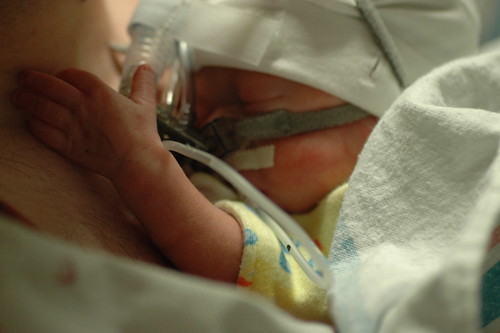 in addition to 2 hours of kangaroo care with kris, i remembered to wear an appropriate shirt, so i was able to spend about an hour of quality time with eric, doing the ‘roo.

and finally, kris gave eric a brief bath today without his cpap mask ( meaning he didn’t have any respiratory aid ). he didn’t throw a single alarm and his blood oxygen looked great, which prompted his nurse to make a clinical note that they might want to think about putting him back on the nasal cannula ( the nasal cannula requires more work on eric’s part than cpap and is considered to be the last phase of “assisted” respiration ) sooner than they originally planned. woohoo!