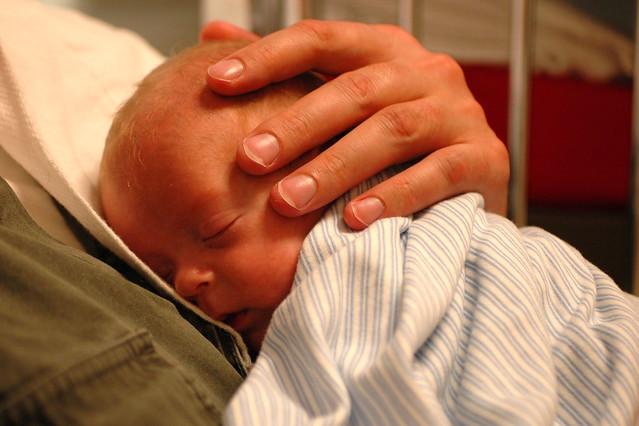 it’s hard to believe that it’s not his first not his second but his third gregorian monthly birthday! we celebrated by spending a little quality time on my chest.

amazingly, he’s continuing to gain weight at a stupendous pace and is flying past the 5 pound mark and weighed in at 2,380 grams or about 5 pounds 4 ounces! 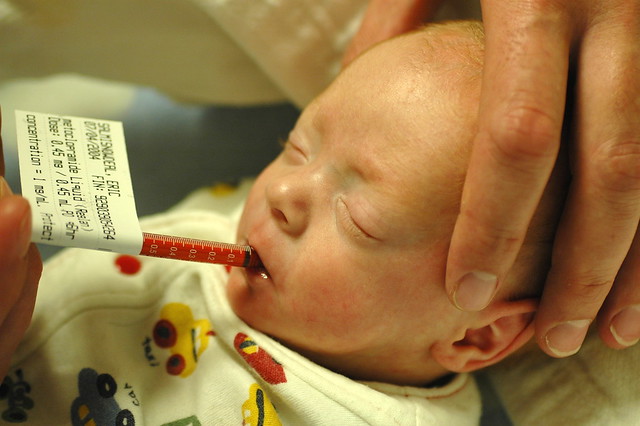 we didn’t have any cake on hand for his birthday, but we did have a little reglan which seems to be doing a good job of controlling his reflux. if fact, it’s doing such a great job that his doctor’s don’t think that he’s going to need surgery! that’s right, just four days ago it seemed inevitable that he’d need some sort of surgery, but today his doctors said that he’s doing so much better that he’ll likely not need any surgery afterall. oddly, they don’t even want to do another upper GI to see if the volume at which he starts to reflux has changed, since it seemed to be such an important number to everyone.

his progress has been truly remarkable, especially over the past couple of days. he’s pretty much completely stopped spitting up and blowing milk out his nose and, more importantly, his blood oxygen and heartrate levels have greatly stabilized. last week, even when he wasn’t spitting up, his heartrate would oscillate up and down, varying by as much as 40 beats per minute; the variations in his heartrate were caused by milk entering his esopagus and stimlulating his vagus nerve which helps to control how fast the heart is beating. in the past few days, these variations have greatly decreased and occasionally they’ll disappear entirely after an hour has passed after feeding.

so was it the reglan? the rice? the weight gains? the time taken to get acclimated to the new environment and recover the ROP surgery? who knows – maybe all the above. it’s hard to describe the feeling of having something like severe reflux just dispappear. poof. will it come back, if he gets stressed out after coming home? i guess we’ll find out soon, since there really aren’t too many reasons left for us to be in the nicu!