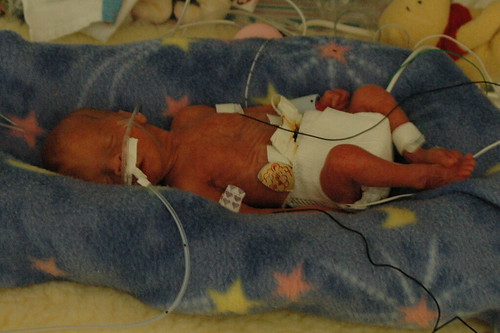 late in the evening we got a call that he had been switched from his CPAP respiratory aid to what is known as a nasal canula. it’s similar to the oxygen tubes that you might see on an elderly relative with emphysema. in eric’s case, it means that they are even more confident that he can breath on his own, unassisted. it also means that you can see more of his face, since he doesn’t have his the CPAP face mask on. he still had occasional bouts of apnea today, so they’re only going to try it for 3-5 hours before switching him back to the cpap regime.

it’s hard to tell in the photograph, but they also took one of his umbilical lines out ( his umbilical arterial (UA) line ), which means he’s further on the road to stabilization. they only remove the line when they don’t feel they need to monitor his blood gasses as closely as they needed on prior days.

they might try to remove his umbilical venous (UV) line tonight. and put in a new IV line in his arm.

a few less tubes and a little more weight gain and we’ll be close to being able to pick him up and hold him!