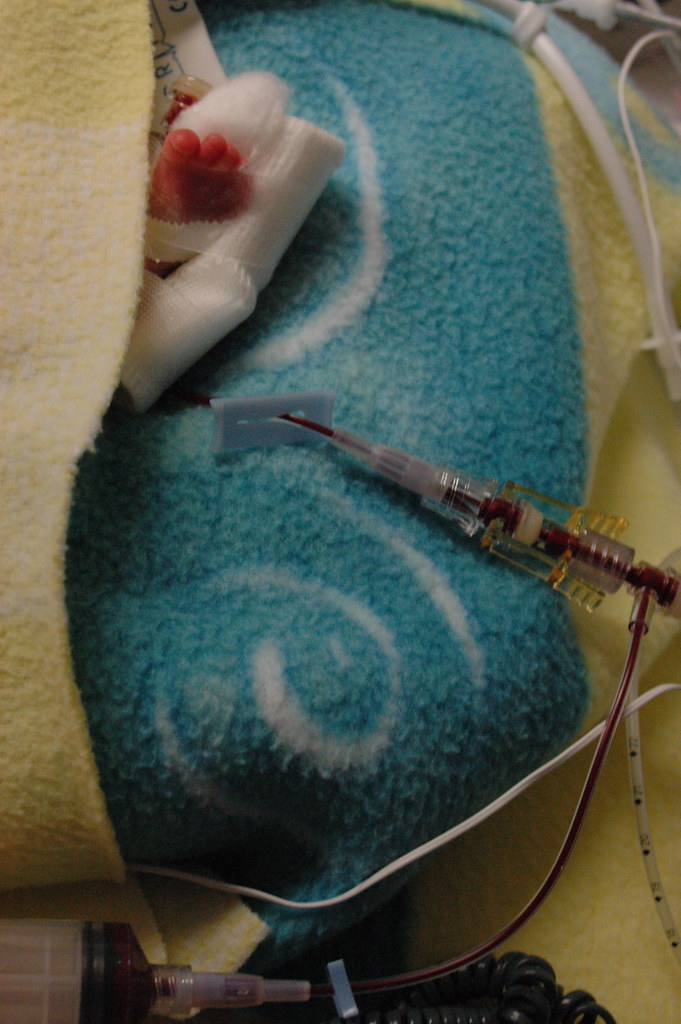 today when we arrived i happened to catch him getting a transfusion. there’s nothing out of the ordinary about this transfusion. he’s had 7 of them so far, which is to be expected.

he gets 7 cc’s of blood with each transfusion. obviously he’ll get increasingly larger transfusions as he gets bigger. he doesn’t seem to mind them too much, although after he got this one he started to cry and there didn’t seem to be anything we could do to settle him down.

his jaudice is getting better without any phototherapy. his bilirubin levels have dropped under 4 and went from 3.7 to 3.4 in just the past 24 hours. so his liver is getting better at processing the toxic byproducts of dying red blood cells. interestingly, a nurse told me that they aren’t really sure precisely why phototherapy helps to break down the billirubin, but back in the 70’s they noticed that the babies that were close to the windows in the nicu did better than those that were not. 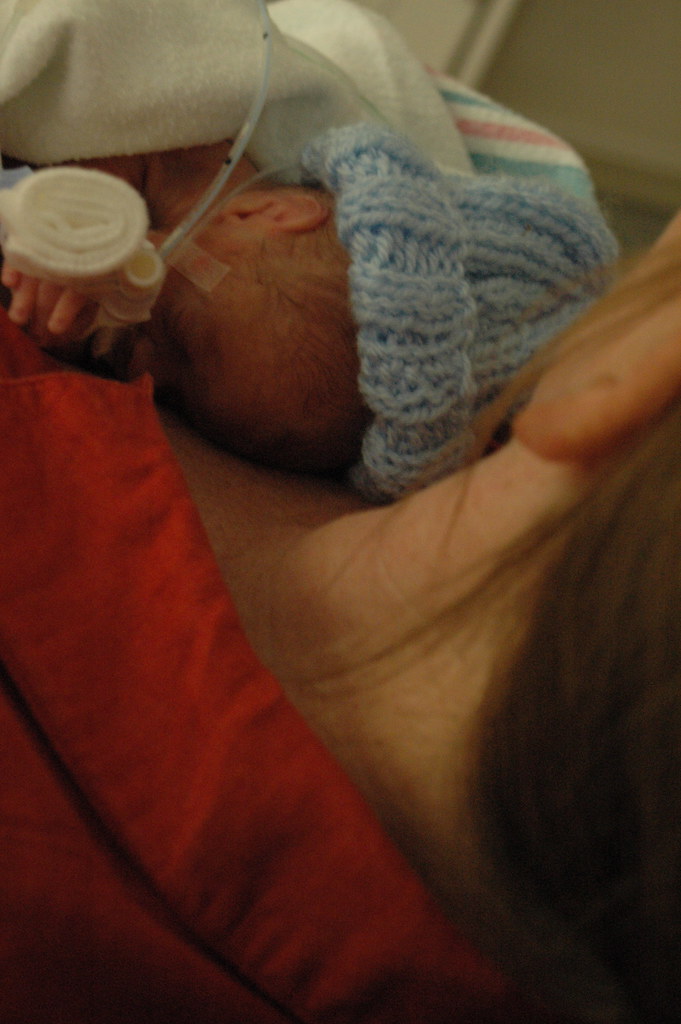 one of the tricks of being in the nicu is learning how to relax with all the commotion going on around you. bells. there are always bells.

kris seems to be doing an admirable job, no?

apparently, i stand corrected about kangaroo care and its adoption in the states. kangaroo care is “becoming” standard practice in america, but it’s not as fully adopted as in europe, where it’s not uncommon to have separate rooms with beds to encourage parents to stay 24 hours. i had commented yesterday that i was surprised that there were prominent nicus in the u.s. that didn’t advocate kangaroo care, but that was based on old information ( from a book that was only a couple of years old, so you can get and idea of how quickly it’s being adopted ), according to nurse jan ( whose hands star in part two of ‘the fourth’ and whom we think eric enjoys immensely ). in fact, the other nicu in town is going to be building a new facility and rumour has it that they will be adopting the european practice of having sleeping areas for parents to encourage them to stay for as long as possible. 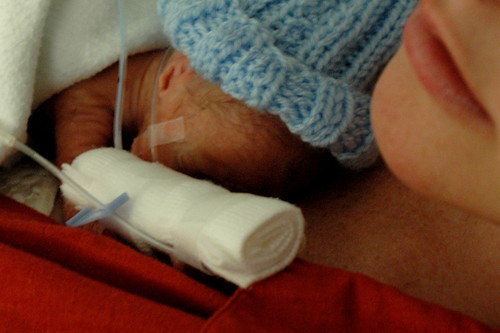 sadly, from what we’ve seen, it might not be appreciated by as many nicu parents as you might think. this might come out all wrong and i might just regret saying it and i’m not trying to cast any dispersions or make any judgements, but we’ve been stunned at how few visitors come to see the other babies. the nurses have commented that it’s not that unusual and that it’s very difficult for them to see how little time your average nicu parent will spend with their children. i think we see people visit for see average of a half and hour a day. period. including on the weekends. and nights. again, i know this is going to sound like i’m saying “ooooohhh, we’re sooooooo great and you’re not. neeener. neeener” and i’m not trolling for “you’re such fantabulous parents” comments; and i certainly understand that people react to the trauma of being in the nicu fishbowl differently, but it’s honestly shocking when you think about the fact that most of the kangaroo care studies recommend at least two hours per day. and those crazy europeans want you to sit around all day.

i guess i’m honestly wondering what the other nicu parents are going through. i’m sure there’s a nicu family counselor out there that could shed some light on the many varied ways that families react. [ update: see this thoughtful response for many rational reasons as to why nicu parents might not be around as often as one might think. given what i’ve seen i supsect i might not be being as sensitive to the ‘distance’ ( we live a mere 4 blocks from the nicu ) and the ‘other responsibilities’ ( i guess those other responsibilities don’t go away on the nights and weekends ) issues. ] 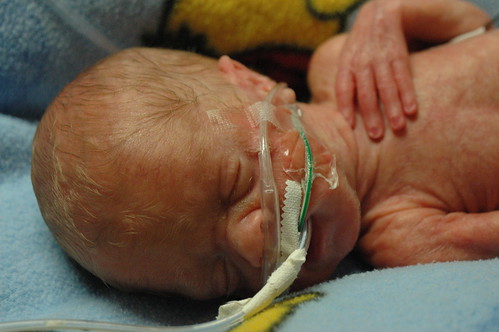 did you notice he had a nasal cannula in during the kangaroo care? he’s breathing so well, that they’ve decided to take him off the CPAP mask while he’s doing the ‘roo. 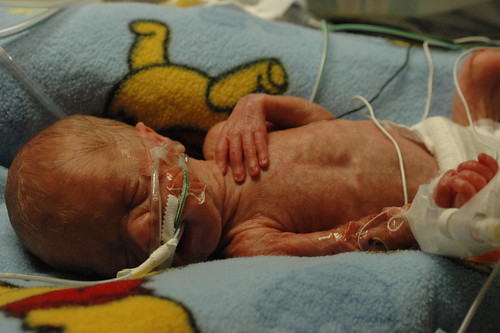 oh. and he’s on 2.5 cc’s of milk per hour! and he’s producing poops on a regular basis! well, he still needs a very tiny suppository to keep things regular, but he’s pooping nonetheless.

no smiles or cutesy eyes today, but he’s content nonetheless.

he has a whole 3 hours of ‘roo time with kris, which is a new record.

i know i’ve said before, but he really, really likes it.

if you look closely at his arm you can see that the bulbous thing has disappeared.