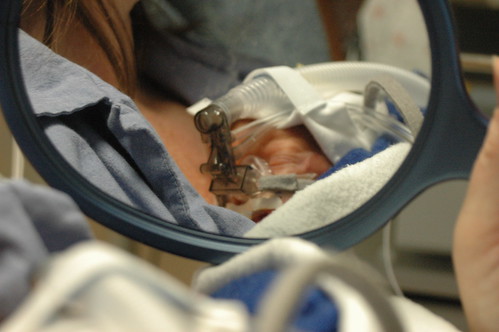 so i guess you really can’t prepare mentally for what you’re going to experience in the nicu. yesterday we had no idea we’d spend the day getting our son to breath and today we thought we’d probably walk in and find him on the vent.

instead the nicu nurse exclaimed, “how’d you like to try some kangaroo care today!”

it was one of those moments where you want to start running laps around the nicu stations yelling, “yeeeeeeehaaaaaaawwwww!” but you don’t. because that would be rude and self indulgent. not everyone else is having such a good day. so you just walk over to your station with a certain jaunt to your step and get ready for Another Perfect Moment. incidentally, this is a good example of the subtleties and nuances that one must observe while becoming a ‘nicu parent’. you’re in a fish bowl with a half a dozen people on their own emotional rollercoasters and you’re all simultaneously trying to figure out how to “become” a parent in front of complete strangers. 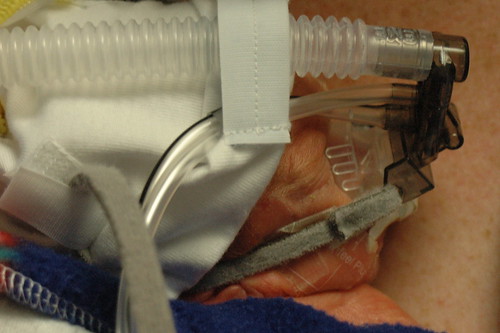 kangaroo care is simply a way of holding a premature baby so that there is skin-to-skin contact. the process is fairly simple – or as simple as you can get when you’re holding a baby who has attached a variety of sensors, wires and tubes; eric, wearing only a diaper, is placed against mine or kris’ bare chest. in addition to providing both parents with a great way to bond with your child, it has been proven to bestow a range of physiological benefits to the child, from stabilizing the baby’s heartbeat, temperature and breathing to boosting a premature baby’s brain development. and it’s a whole lot of fun. 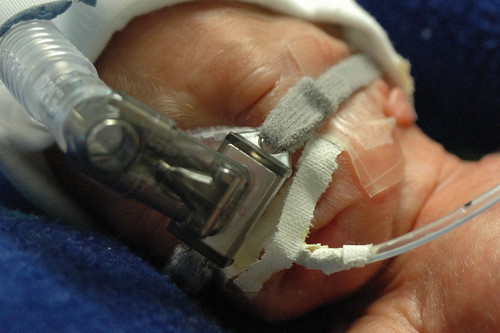 after all the kangaroo care, he looked completely content and i noticed that he seemed to have much more fuzz on his face.

if you look close you can see that his eyelashes and eyebrows are coming in. 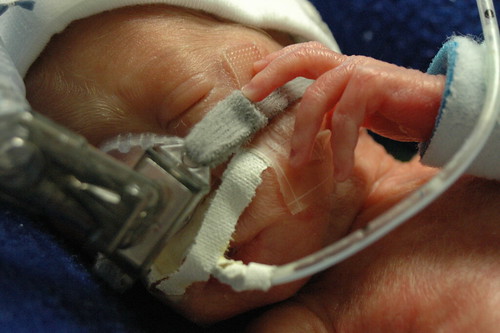 he strikes a thoughtful, if a bit fuzzy, pose. 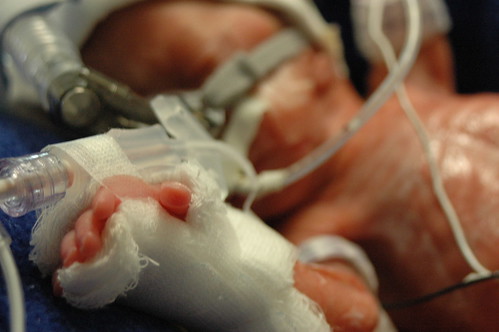 kris held him for an hour and indeed, his breathing and heart rate improved, as evidenced by a lack of apnea alarms. of course, as soon as the nurse put him on my chest, his oxygen dropped and we basically spent 10 minutes trying to get him to breath deeper before giving up and putting him in his bed. feeling like i got the short end of the kangaroo care stick, i decided to give him a massage with an ointment that smooths his skin, prevents water loss and helps him retain heat.