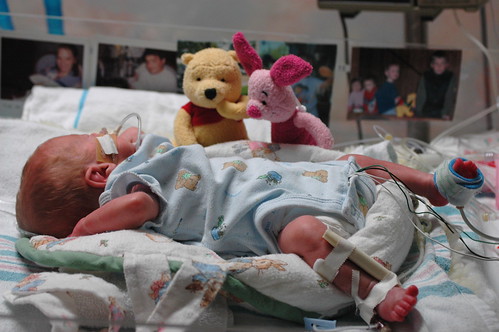 eric’s intravenous line was moved to his foot, so we were able to dress him in his very own cloths today!

pooh and piglet came over to check out his new duds and compliment his on being healthy enough to ditch the hospital outfits. pooh is particularly amazed at how big eric is getting, while piglet is confused as to why the bears on eric’s shirt don’t look like pooh bears.

we received the shirt from beth, a friend of kris’ who also recently had a preemie in the nicu ( thanks! ). i believe the shirt can be found at target and is one of the few preemie specific outfits that they carry in the store. it’s a little hard to tell from the picture, but he still has plenty of room to grow in clothes, which is funny because they look so tiny compared to full-term baby outfits. 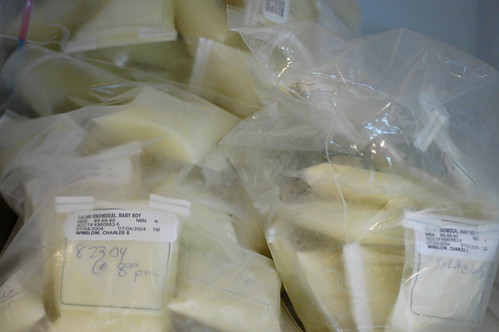 today, we reached a milestone that nicu veterans probably suspected was fast approaching when they saw the supersized paci. that’s right, the sometimes long and complicated process of getting a micropreemie to breastfeed has officially begun with what’s known as non-nutritive suckling. essentially, after kris has pumped ( charming phrase, no? ), she puts everything in place while eric gets a feeding through a tube. it’s the first step towards getting eric to realize that food doesn’t always come from a syringe; despite the fact that no feeding takes place, it has innumerable good side effect, from aiding in mama and baby bonding to helping kris to sustain her milk production. it’s not unusual after 6 or 8 weeks of pumping for milk production to begin to fall off if real breastfeeding hasn’t begun, so it’s time to start trying tactics to keep production up, since even if everything does optimally well, it could be weeks before eric is able to coordinate the complicated series of events that need to occur for proper breastfeeding.