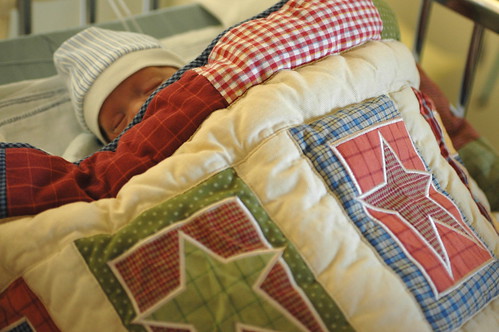 due to the facts that the new nicu is a little cooler than the old one and eric doesn’t have that much baby fat, little odin needs a lot of help keeping warm, so we decided to bring in a blanket that he received as a baby shower gift. it’s quite big, but it does a great job of keeping his temperature at acceptable levels. but of course, how well he maintained his temperature was the least of our concerns today. 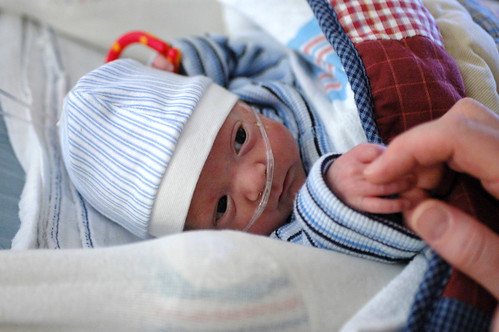 right before his ROP assessment, kris talked to him and explained what was about to happen.

it’s hard to tell in the photo, but the opthamologist had called ahead and they’ve put drops in his eyes which dilate his pupils and make him very sensitive to light. defying expectations, he didn’t seem too bothered by the drops. 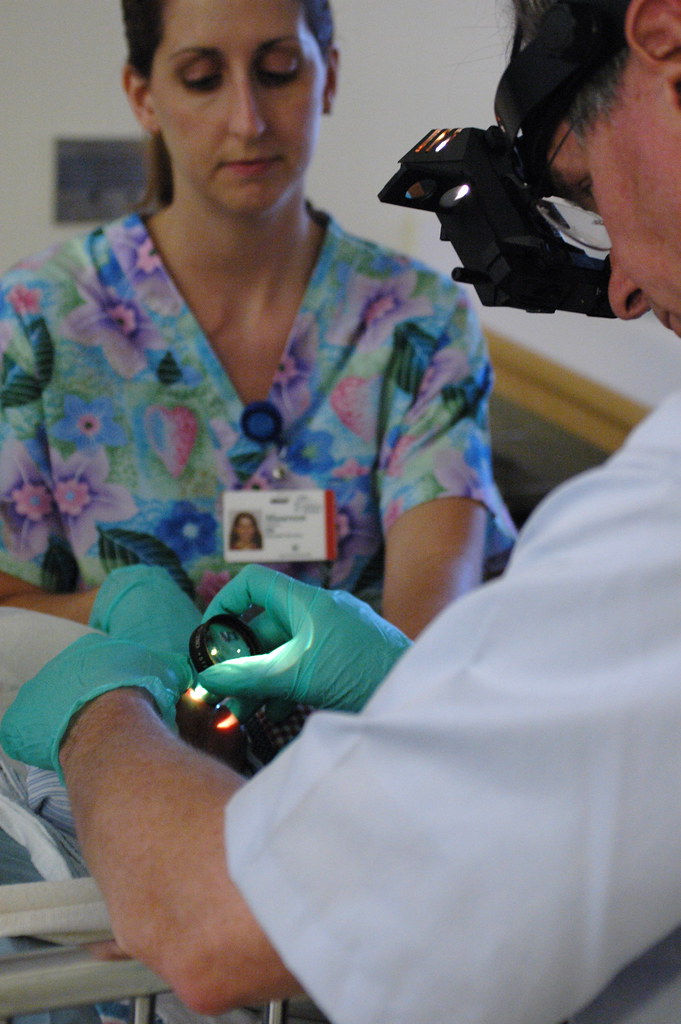 soon after his quality time with mama – his opthamologist, dr. droste, examined his eyes by placing a magnifying glass over each eye and looking into them. although we held out a small amount of hope that his condition was apparent, but not real, the good doctor concluded after a few minutes that the disease was progressing quite quickly and he’d need surgery soon to prevent complications such as blindness. eric now has stage 3 ROP with plus disease in all “twelve hours” of zone 2 in both eyes. my understanding is that the severity of the “plus disease” is necessitating the fast action. plain vanilla stage 3 ROP doesn’t always require immediate surgery, but when the blood vessels become engorged or abnormally dilated it’s best to act quickly to prevent permanent damage.

tomorrow, the doctor will put a laser on his head and tap a button on the floor which will ablate ( or in opthamologist lingo, “burn” ) over 1,200 overgrown and abnormally tortuous blood vessels in each of his retinas. amazingly, the whole process is expected to take about an hour. despite the advanced stage of the disease, the doctor thought that eric had a good chance of escaping any permanent damage. 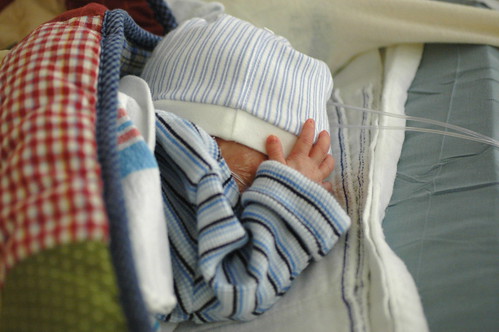 perhaps due to the lingering effects of the drops that dilate his pupils, eric is convering his eyes and looking like he’s pondering his new predicament, as he musters the energy to cleanly clear his latest hurdle.

in an oddly calming tone, the opthamologist said that they needed to do the surgery soon because even in just a few days they’d be “playing catch up”, which is certainly not something you want to be doing when the stakes are eyesight. it’s interesting to note that stevie wonder was born premature and went blind from the same disease, but much progress has been made in how to treat the disease since stevie lost his sight.

the good news is that they caught the condition so quickly. although his opthamologist said he had seen similar cases where the disease progressed so quickly, he professed that, “it didn’t happen very often.” and the really good news is that there must have been a miscommunication the other day because he expects eric to recover quickly and the ROP surgery shouldn’t significantly delay his release date! there’s a good chance that he’ll need additional surgeries, but he doesn’t need to stay in the hospital for monitoring.

if everything goes as planned, after a few days of recovery from the eye surgery, they are going to take advantage of the fact that he’s already where he needs to be and schedule surgery for his hernia. hernia surgery is relatively routine ( although i know one reader in particular who could speak at length at how things can get un-routine pretty quickly ) and it also is not expected to significantly delay his release. so, if we can make it though a surgery or two unscathed, we’ll be back on track for an early release, if not quite as early as we originally planned.

if you’re so inclined, think good thoughts or say a prayer for us around wednesday at 4 p.m. (eastern time, u.s.a.), as we hope that dr. droste hasn’t decided to have one too many cups of coffee.