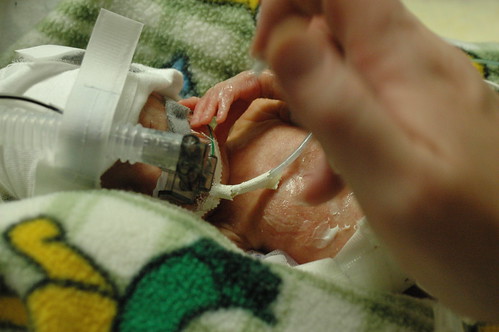 kris decides to give eric a late night massage to celebrate his 2nd week birthday. the massage helps keep his thin skin from drying out under the heat lamps. 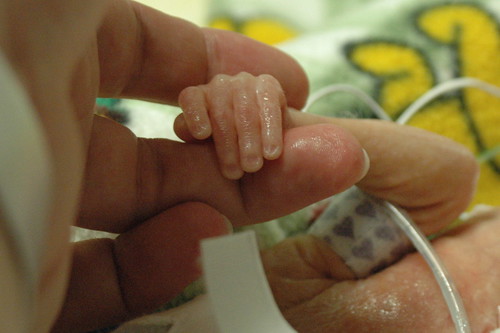 during the massage, eric decides he really just wants to hold kris’ hand.

it’s amazing to see him actively search out her finger, grasp it tighly and resist her pulling her hand away. 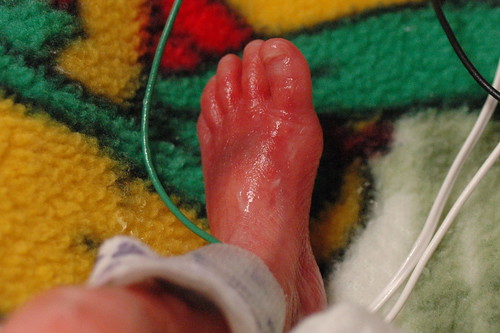 i’m on a self imposed massage hiatus, as you can see the results of what happened the last time i gave him a massage.

yes. i bruised my premature son’s foot because i rubbed it too hard. the lesson is that you don’t have to rub very hard at all to bruise a micropreem, which makes giving a massage more difficult than it might seem. 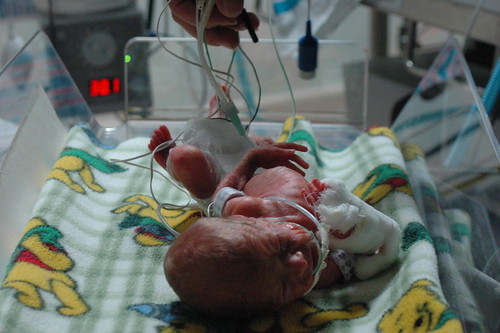 i haven’t been posting many updates on eric’s weight, because – well – not much interesting happens in the first couple of weeks ( unless he gets sick and loses a bunch of weight ). all his energy in the beginning is spent fixing vital systems and isn’t directed towards weight gain per se. micropreems will typically lose a little ( it’s normal to lose about 10 percent of their birthweight in the first few days ), slowly gain it back over the following two weeks, and then ( hopefully ) go on a weight gain tear.

tonight, he weighed in at 685 grams, which is about 1 pound 8.2 ounces. he was down to 1 pound 6 ounces a few days after his birth, at which point he weighed 1 pound 7 ounces.

so he’s perfectly normal. for a micropreem.

we also learned tonight that, after being taken off breast milk when he went back on the vent, he’s back on regular “feedings” ( technically they aren’t feedings at all, but rather “gut priming” to get the blood flow going in his stomach, but gut priming has a much less appetizing ring to it, so i just call everything a feeding ). he’s on an IV drip of breastmilk at a rate of 1 cc per hour, which is different than the previous feeding protocol known as “gavage” feeding which involves putting a few drops in his endotracheal tube. i think they are being a little more cavalier about the amount that they are giving him because it’s being given through his new “o.j.” tube goes straight to his intestines ( see today’s prior post for more information on his feedings, the “o.j. tube” and how this all might be related to his most recent downturn ).

i’m a little suprised that they would start putting him on 1 cc per hour of milk when they were expressing concern that some of his issues over the past few days might possibly ( or might not, depending on the latest theory ) be related to his feedings, but what do i know. i’m not a doctor. and i don’t even play one on tv.

in any case, if we tolerates his feedings, i’d expect him to start gaining weight quickly over the next few weeks.

oh. and as you can obviously tell from the picture – he clearly doesn’t like to be weighed. 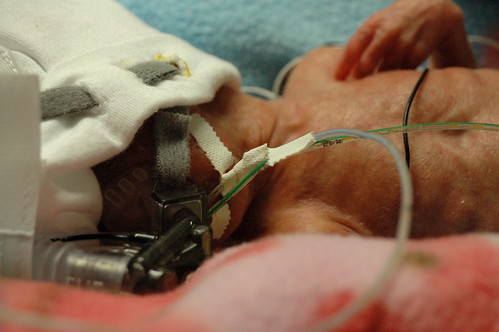 lots and lots of things going today. he was doing so well on the vent and they were so quickly dialing back the “assist” settings that they put him back on the less abusive CPAP regime last night! w00t! again, they thought it wouldn’t be unusual for him to stay on the vent for a few weeks, so this is a great sign that he’s recovering quickly. 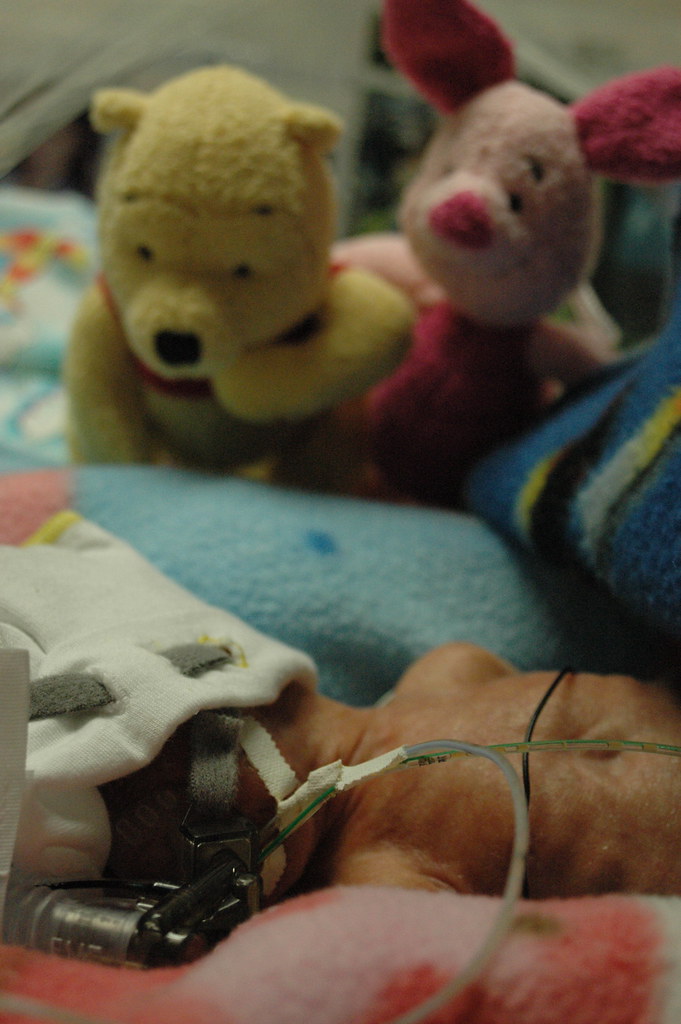 his white blood count differentials are looking better. they still haven’t found a specific bug and nurse practitioner dawn and i talked about the meaningfulness of the tests for quite some time today. they are useful as a “barometer”, but not as useful as compared to full-term differentials, since there seem to be so many special exceptions to the rules for micropreems, as their immune systems simply respond differently or not at all. n.p. dawn has apparently seen micropreems close to death with no differentials at all and perfectly healthy babies with big swings “to the left” ( she kept referring to a “swing to the left”, which i’m sure refers to a change in the standard differential graph, but i never bothered to clarify the point so i could be wrong ). 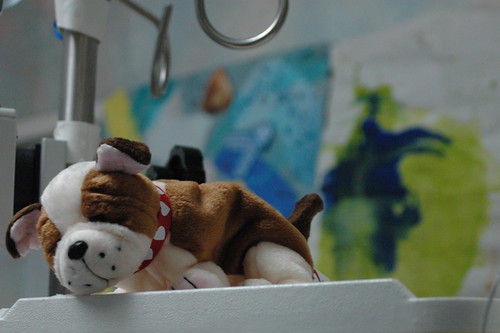 so, in the continuing saga of making Educated Guesses, since they’ve not found anything in his cultures ( again, you might not ever find anything in the cultures ) and his insulin has stabilized, they feel that he could be: 1. responding appropriately to the antibiotic regime. 2. stabilizing after being Just Plain Tired and the differentials were a Big Red Herring 3. stabilizing after having a bout of the earliest stages of necrotizing entercolitis (NEC), which is an inflammatory response in his gut that we talked about the other day and which could cause the differentials that they were seeing. 4. stabilizing after “aspirating” his food back from his stomach into his esophagus, which – for reasons that aren’t well understood – can cause apnea, bradycardia and differential shifts to the left. 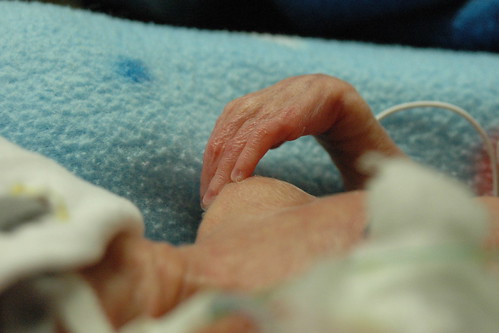 when eric went back on the vent, they stopped his feedings, which would have reduced the potential inflammatory response ( just one of the many variables that changed ) and/or the potential aspiration events, so they are now moving away from the yeast infection theory and towards the theory that he’s not tolerating his feedings. 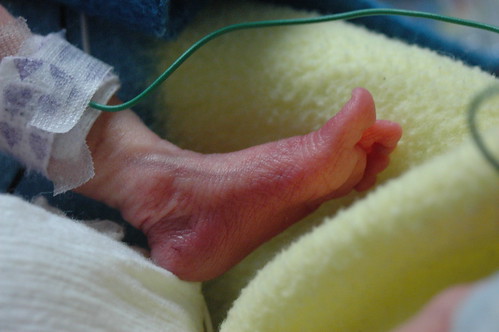 to that end, the observant among you will notice that he now has a green “o.j. tube” ( oral-to-jejunum ) inserted through his mouth ( can you guess where an “n.j.” tube originates? ) and threaded down his esophagus, through his stomach and directly into his intestines ( you did remember that jejunum is the name for the beginning of the intestines, didn’t you? of course you did. ). the o.j. tube will reduce the chance that he will aspirate his food. 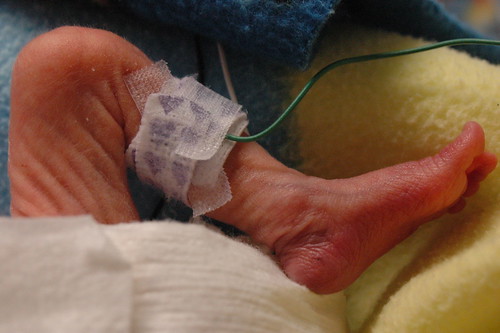 the potential NEC is a little trickier to manage ( and much, much more problematic if they don’t catch it in time ). about the only thing they can do is reduce the amount of milk they give him in the “gut primings” and watch him very closely. 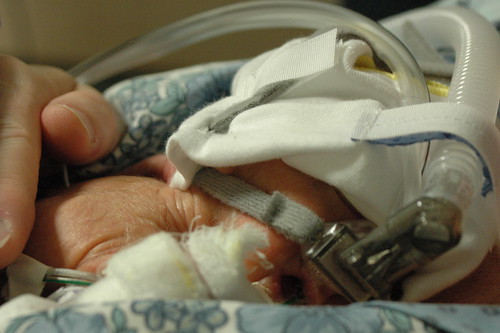 anyway. the greatest part of going off the vent and back to the CPAP is that we can start the kangaroo care again! and this time kris had him on her chest for over 1.5 hours and completely hogged all the time. i think she needs to learn how to share 🙂

the biggest excitement of the day came at the end of the kangaroo care when eric decided to surprise everyone by pulling out his endo-tracheal and o.j. tubes. i can’t imagine that it was very pleasant, so hopefully he’ll realize not to do that too often. he was quite unhappy with nurse donna when she abrupty had to wisk him away from kris to start rethreading tubes.

oh, and it shouldn’t go unmentioned that as of 8:36 tonight, he’ll be two weeks old, which brings his overall survival stats to closer to 85%, which is certainly a lot better than his chances when he first came into the nicu.