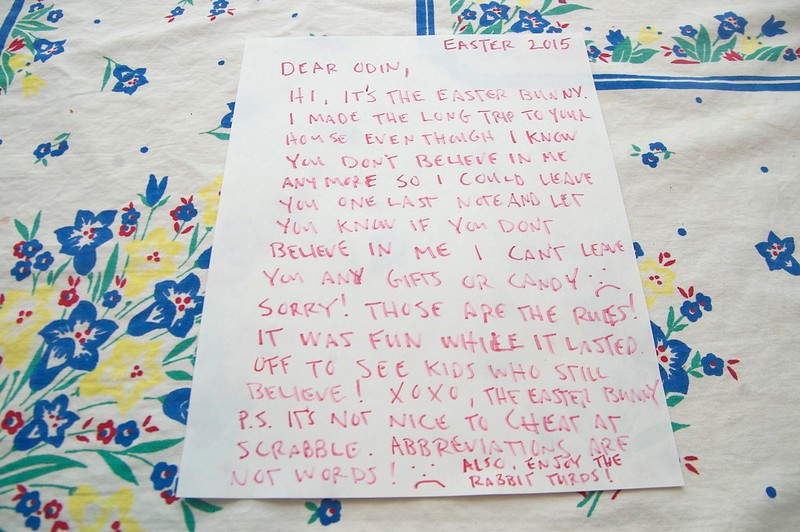 after 10.75 years the jig was up. odin went to bed and said, “you know, someday you’re going to *have* to tell me the easter bunny, santa claus and the tooth fairy aren’t real.”

he’d noticed Incongruities for a few years that raised A Few Questions. Serious Doubts emerged after the topic came up in the hockey locker room and none of his teammates believed in any of it anymore. a few months ago he was reading a judy blume book ( i forget off hand which one ) and the characters just flat out talked about santa not being real WITH NO SPOILER ALERTS?! the clock was ticking and he had recently started up with The Questions.

after he went to bed i wrote a note in jest. obviously in my handwriting ( after years of trying to conceal it ) and with a reference to a recent scrabble game that would surely give it away.

in the morning, it turned out that he wasn’t quite as sure as we thought and the humor of my note was maybe not so humorous 🙁 he was bluffing, sort-of. i think he really knew but still some part of him didn’t want to believe.

in the end he was a little sad but i think also a little happy to realize he’s A Big Boy.

when all was said and done he only asked, 365project365project2015eastereaster bunnynote