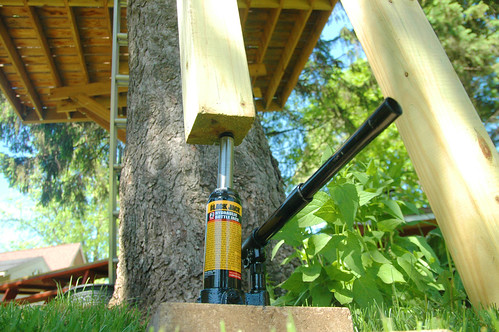 at the end of last summer, after camping in the trees and watching movies treehouse movie theater i was excited to kick off weekly movie screenings and having all sorts of fun up in the trees this summer.

but after spending the winter looking at the 14’x16′ deck over the winter, i couldn’t stop wondering if the supports for the deck needed to more, well, more supportive. it’s not that i think it’s dangerous now, but thinking out a few years when wear and tear starts taking its toll, i decided i needed to bolster the supports and strengthen some potential points of failure. and in order to do that, i need to take down the supports, which is extra challenging since there are no posts running to the ground.

first things first – i needed to jack up one end of the deck. a 1.5 ton bottle jack and a 4″x4″ post were the right tools for the job though they were a wee bit prone to falling over so having a second post ready was important. i’m glad i thought of that ahead of time 🙂

odin helped crank up the end of the deck a few inches while i put the second post in place. 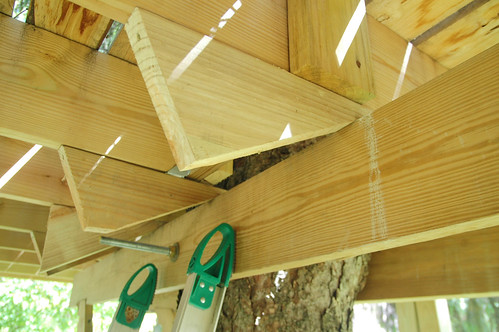 next, i secured some shims in place on the second support on the same tree so the support could take some of the load off the 4″x4″ post. 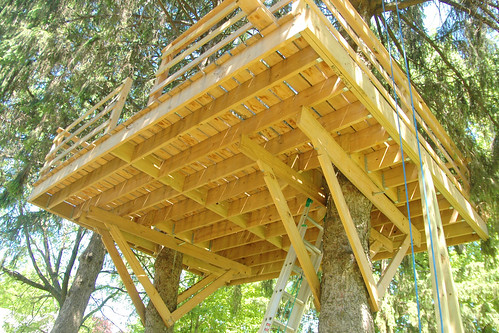 with the 4″x4″ post secured and the shims in place, now it’s time to take down the rightmost support down. 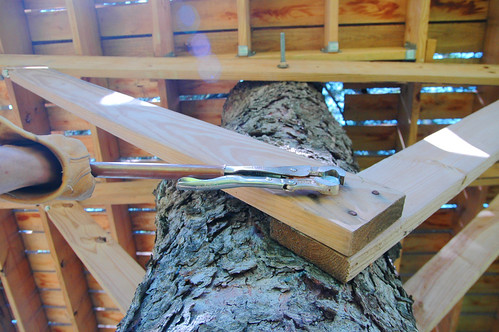 i have to add a bit of leverage in the form of a copper pipe to wrench out the 12″ lag bolt at the base of the support. every creak and groan in the deck is a bit nerve wracking. 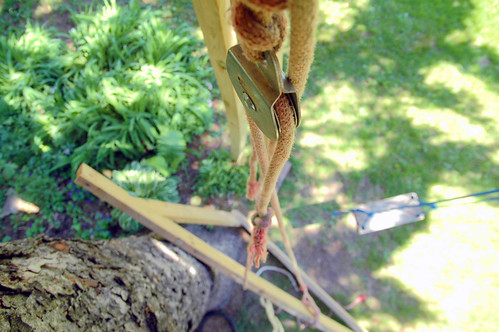 with the lag bolt out, then i attack the support to a pulley and knock it off the 3/4″ threaded rod that’s holding the top of the support on the tree. standing on a ladder holding a sledge hammer while knocking the support off the rod and holding the pulley rope is trickier than you might think. 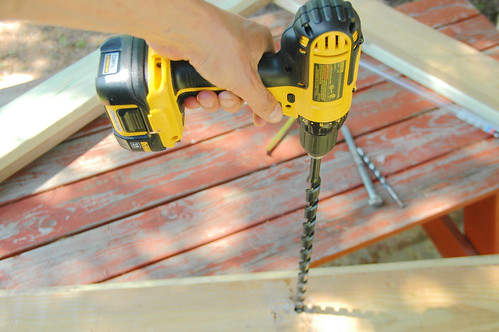 and then it’s time to start making the support more supportive! i’m going to lengthen the horizontal section of the support so it runs the entire length of the deck, “sister” a second set of boards to the support to make it twice as thick and attach 3/8″ 12″x12″ steel plates to both sides of the support where the lag bolt goes into the tree. the bottom of the support is the key failure point so reinforcing it with over a half inch of steel will go a long way to ease my mind.

and no, i didn’t really need to use a 2 foot bit to work on the supports, but if you’ve got a big bit, baby you should use it when you get the chance.

2 thoughts on “making some modifications to the treehouse deck.”