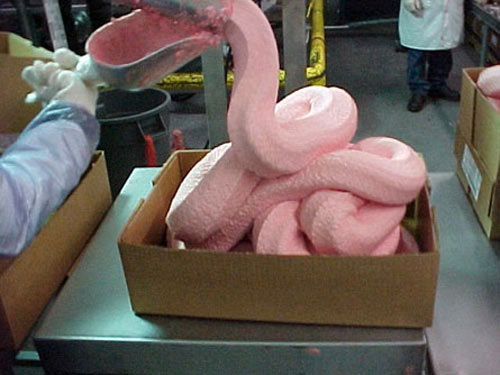 jason kottke and snopes both attempt to correct some of the inaccuracies in the mechanically separated chicken linkage that’s been making the rounds which i lazily tweeted without attempting to correct myself. while they do a good job of correcting aspects of the meme, i’m still waiting for someone to really scrape the bottom of the mechanically separated meat barrel ( to mix a metaphor, badly ). questions still not resolved related to jason’s enumerated points:

2. no, the entire chicken is not ground-up during processing, but according to the usda, the “product [is] produced by forcing bones, with attached edible tissue, through a sieve or similar device under high pressure to separate bone from the edible tissue.” jason simplifies this to “the bones and such are removed”. while i suppose that’s true, it sounds as if the bones specifically aren’t removed prior to being forced through the sieve ( some certainly get through ). and what constitutes “edible tissue”? i’m guessing there’s a conceptual gap between what the average consumer and the usda considers to be edible tissue.

3. no, ammonia is not an approved “food additive” and mechanically separated poultry is likely not “soaked in ammonia” as the meme claims ( or, rather, snopes says “poultry processors do not routinely soak MSP in ammonia” which sounds a bit cagey ). but this conflates an additive with a processing aid. lots of things can be approved as processing aids that are not approved as additives per se. while the product is probably not processed with ammonia, it almost certainly is “cleansed” with chlorine bleach ( or perhaps lauric acid and potassium hydroxide ) at some point.

while i applaud efforts to correct innacuracies in memes floating around the intertubes, i’m still left with basic questions about what mechanically separated poultry looks like, what’s in it and what processing agents are used in its production.

what say you armchair, intertube muckrakers?

One thought on “on the mechanically separated chicken meme.”