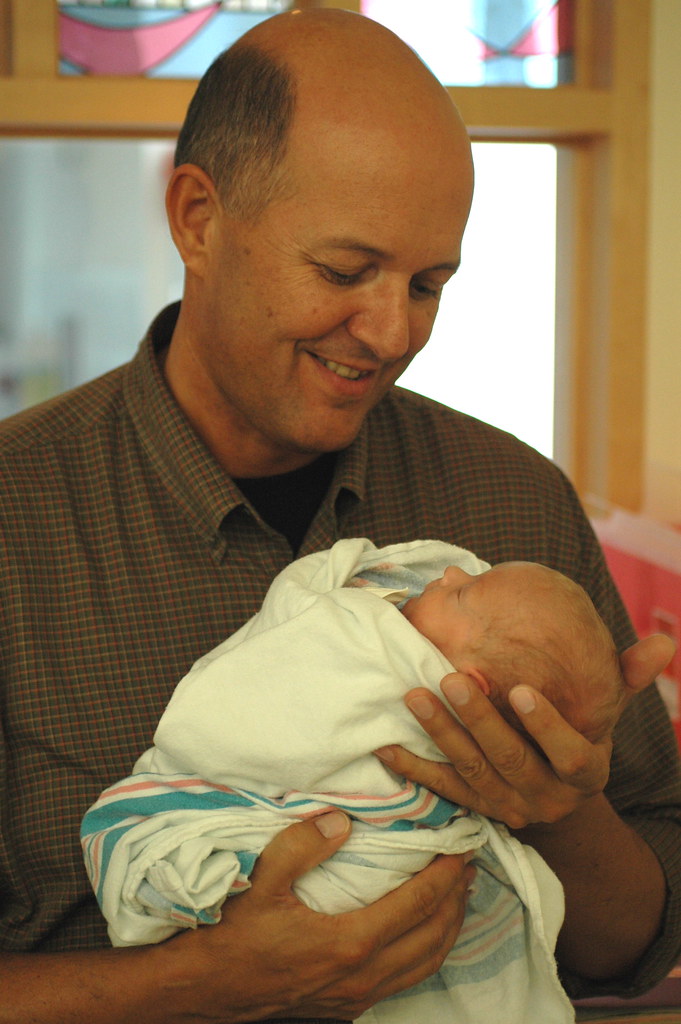 the big news today was that thanks to the less restrictive visiting policy at the new nicu, eric got a special visit from his grandparents, which meant that eric met eric while eric watched! fun! he also got to see grandma snowdeal which was equally fun. the new nicu allows anyone to come and see eric as long as we’re there, so it’s nice to get a chance to show him off, although we would begin to suspect later in the day that all the new voices ( he had more visitors than just grandma and grandpa ) might be stressing him and contributing to his alarms. 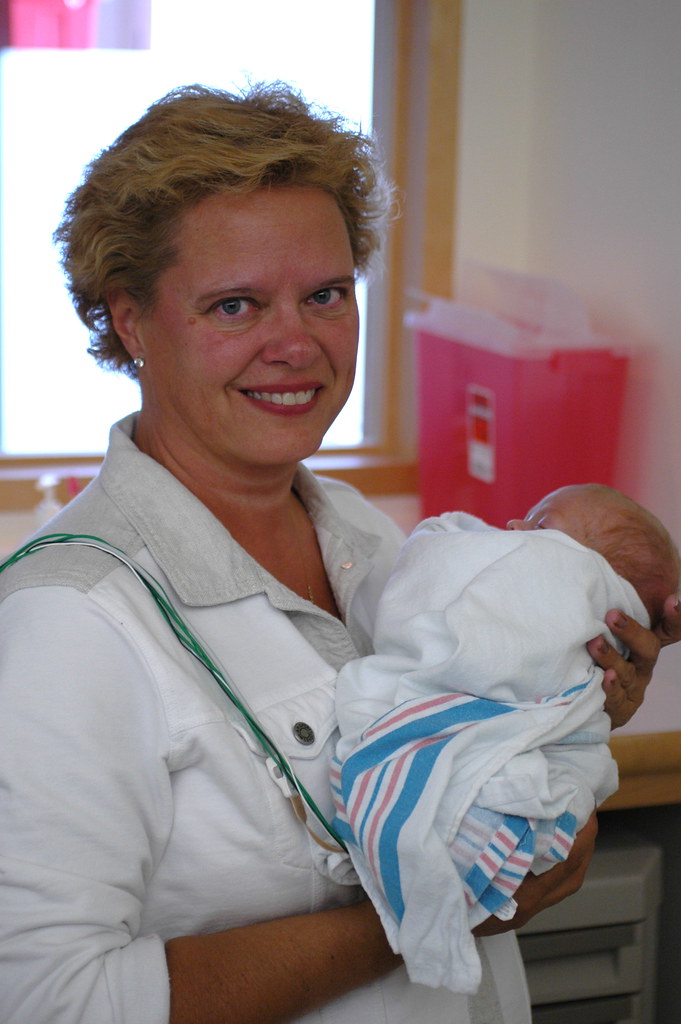 ( for family and friends who are reading this who might be or have been visitors, don’t go thinking that we’re saying we don’t want visitors – it’s just that we might need to be more sensitive to talking quietly around him. or perhaps not talking at all, if he’s really stressing out. ) 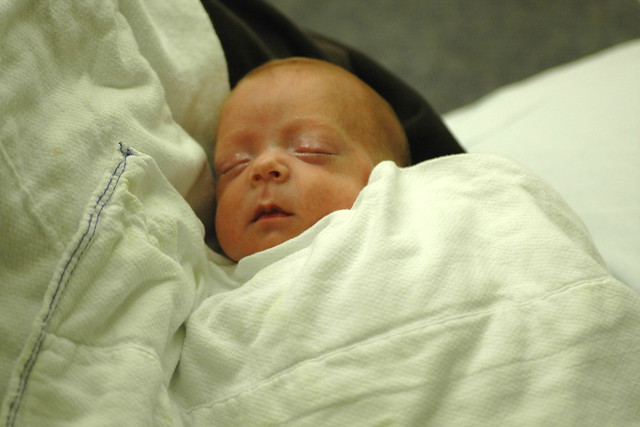 he’s continuing to reflux quite a bit, which means after he feeds he starts to send milk back up his throat and out his nose and mouth. while mild reflux is a relatively benign problem in full term infants ( and adults ), micropreemies can get milk in their lungs which causes pneumonia and the process of refluxing causes them to stop breathing, which is not fun.

he still hadn’t been put on reglan when we arrived. so, we took time during the day to talk to yet another neonatologist about the risks associated with reglan. it’s all the more frustrating that this is one of those areas where, if you ask 12 different people a question as simple as “how common are the side effects from reglan” and, you’ll get 12 different answers ranging from “we haven’t seen anything in 30 years of practicing” to “it’s a drug, it has risks and we see about 5% of kids who have side effects.” to “well, occasionally i’ll see twitches, but i don’t like to use it because it’s not really effective.” 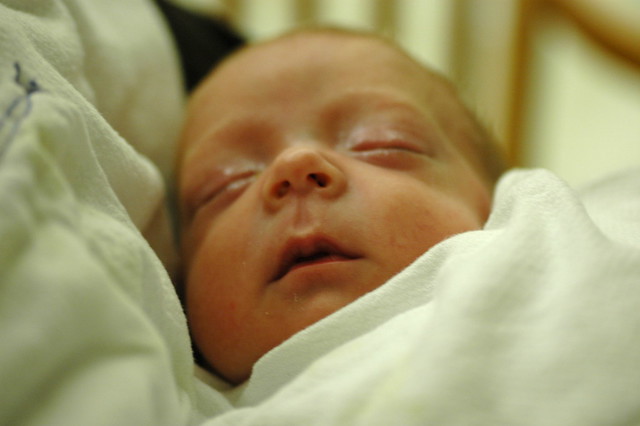 but eventually, we had to do something to help him keep his food down; he lost a little weight over the night, presumably due to the fact that he’s losing so much food out of his mouth and nose. so, in the evening, we started him on a drug that can cause blood problems, muscle spasms and tics in children and is the subject of lawsuits due to the fact that it’s known to cause a neurological condition known as tardive dyskinesia. most of the people we have talked to said that they thought that there was no evidence that any of the known possible severe side effects were an issue if the drug was dosed correctly on a short course of treatment and if it was removed at the first signs of any adverse events. i guess we can only hope that they’re right.

in the above photo, kris unintentionally captures a few of his milk boogers from the reflux. if we leave them in too long, then he gets stuffy and has problems breathing, so we have to constantly use a “bulb syringe” to suck out the milk boogers, which he likes none too much.

even though three days have passed since the surgery, he’s still doing things that he never used to do and it’s hard to tease apart the root causes. in addition to the new reflux problems, he’s still having many more apneas ( forgetting to breath ) that he has in the past ( remember, he went quite some time without having any alarms at all ). yesterday he had over ten events, some of which he had a difficult time pulling out of without the use of pure oxygen blown near his nose and mouth. eric is also having problems coordinating his suck-swallow-breath sequence while taking the bottle. he seems to remember the suck and swallow parts, but forgets to breath, which is contributing to the alarms. 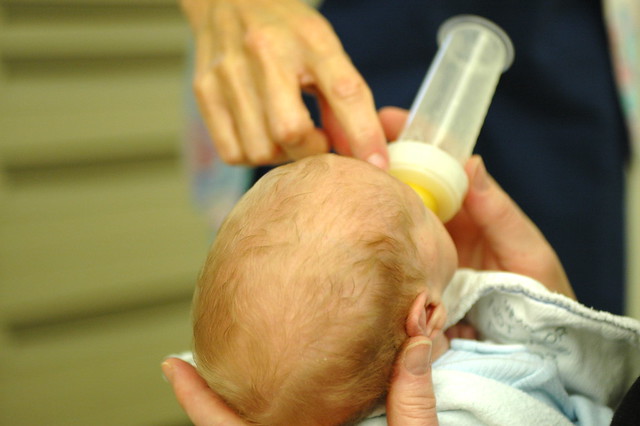 when his evening nurse came on shift, she came over and started talking to me and i saw her make a face as he started to alarm. she came back a few minutes later and he started to alarm again when she started to talk. a lightbulb went off and she said that she thought he was still overstimulated from the move and the surgery and all the new voices and sounds. micropreemies normally have very little “reserve capacity” to keep up with the rigors of breathing and feeding and stressors can often wipe out what little reserves they already have. sometimes, soon after he was born, just using two of his senses ( e.g. looking at you while listening to you talk ) would wipe out his reserves and he’d start alarming. we hadn’t thought about the issue in awhile because as he got older it seemed to be less nd less of an issue.

so we made an extra efforts to “stim” him less in evening by moving him less, turning the lights down lower than normal and talking in even more hushed whispers than typical. thankfully, the efforts seemed to work and his number of alarms seemed to diminish. in retrospect, it’s fairly obvious that his reserve capacity has been completely depleted due all the new alarm bells and nurses voices and babies crying, in addition to the lingering effects from the surgery. thanks to an observant nurse, we now have a working theory that can give us something constructive to do – do things to keep his stimulation levels to a minimum – rather than sitting around, getting anxious and overstimulated ourselves, wondering if an impending infection is the cause of all his alarms.