since i have absolutely no free time, i’m going to try something new and only put a placeholder entry here. perhaps i’ll get a chance to put a more detailed account here later. or perhaps not. but for now, i’m just going to give the bullet points there are more important things to attend to.

i apologize to everyone who called yesterday who didn’t get a call back. obviously, cell phone time is short and i’m basically in “triage” mode and only returning emergency calls. after a whole bunch of voicemails it became apparent that there was some confusion about eric’s eye surgery. he was being transferred today ( monday ) and will have an assessment on tuesday. if he moves from being “prethreshold” to “threshold” then he’ll need surgery within 72 hours. the quick move was made because the expectation is that he’ll move quickly into threshold land and everyone wants to be prepared for that event. we don’t know exactly when he’ll have the surgery in the event that it’s required and i won’t have that answer until later tommorrow. 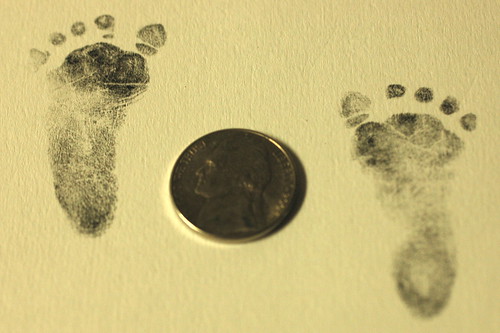 as eric gets close to transfer, the nurses get the proper paperwork in order. amidst the release forms i discovered an identification form that has his footprints that were inked on his first night in the nicu.

they sure were small. about as small as nickel. 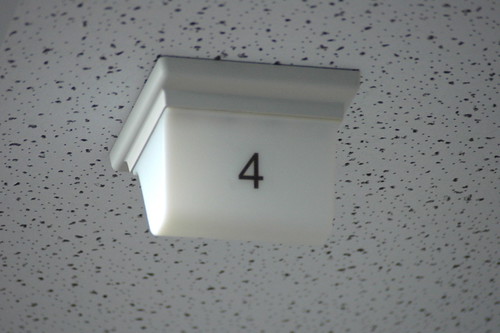 eric made great leaps and bounds while staying in “bed 4” in the nicu, which seemed like a perfect number since he’s eric “the fourth” born on the fourth of july.

we would later discover that he would be sitting in bed 4 at the new nicu, which makes us think that “4” just might be his lucky number. 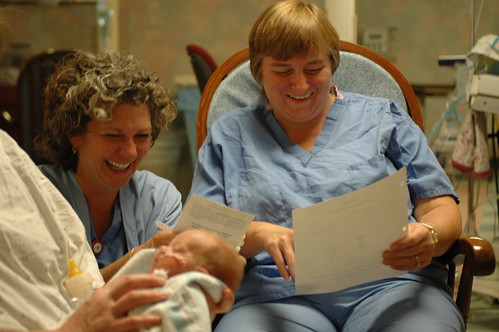 according to the rules that one must follow when tranferring a baby from one nicu to another, the nurses must corroborate that he is, in fact, who they think he is and read match the identification number on his nicu ID bracelet with the number on the transfer papers. 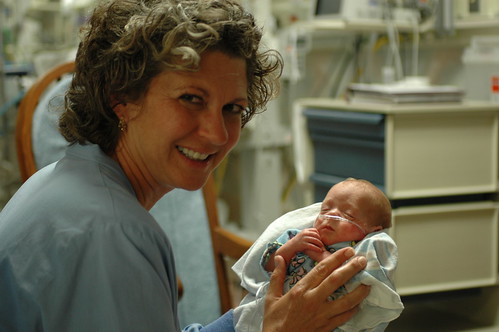 nurse nancy is superfantastic and she spent much of the day trying, unsuccessfully i might add, not to cry. eventually i was able to capture her with her “happy face” on.

nurse nancy was eric’s nurse for many of his “big steps” including being transferred to the isolette and the open, unheated bed and his first bottle feeding, so she’s very, very attached to eric. 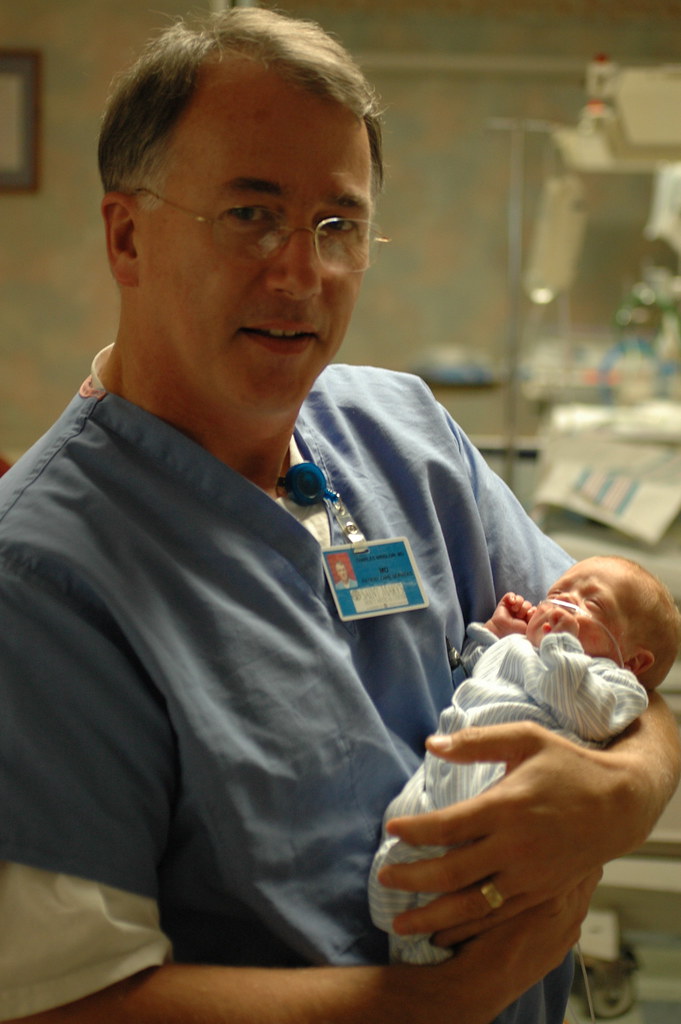 this is charles, “charlie” winslow – eric’s neonatologist. he’s the reason why eric is alive and words can’t really describe how highly we think of him.

he’s a nice guy, a great communicator and rides a bike to work. 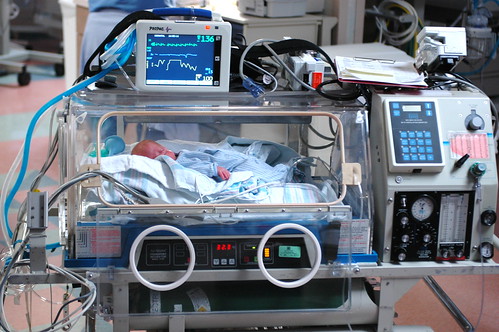 after the transport team arrives from the new nicu they quickly put eric in the transport “crash cart”. the whole process only takes a few minutes.

his “saint mary’s” nurses are standing around looking sad and i wish there was more time to say goodbye. 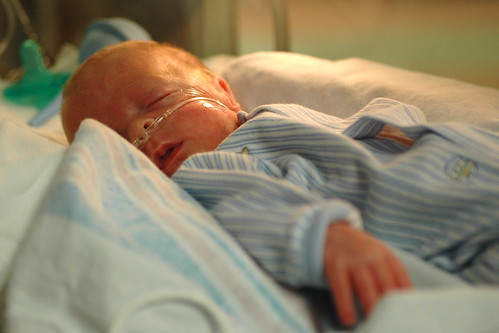 little odin is resting comfortably in the crash cart, oblivious to the fact that he’s, ever so briefly, about to see the outside world for the first time. 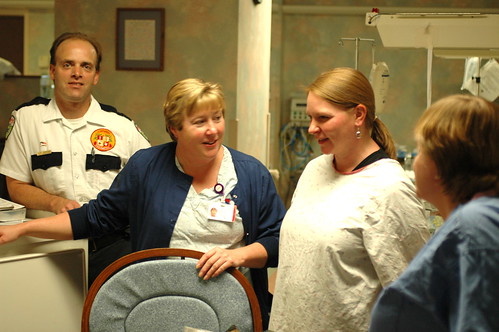 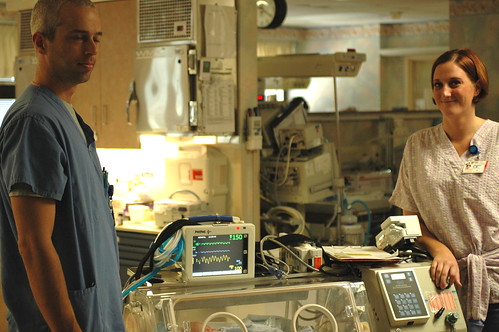 more people from the transport team. the man on the left is a respiratory specialist and the woman on the right is a registered nurse.

they’re amiable and do a great job making us feel relaxed. somehow, during the quick process of getting odin prepped for tranfer i find myself talking with the respiratory specialist about digital cameras. go figure. 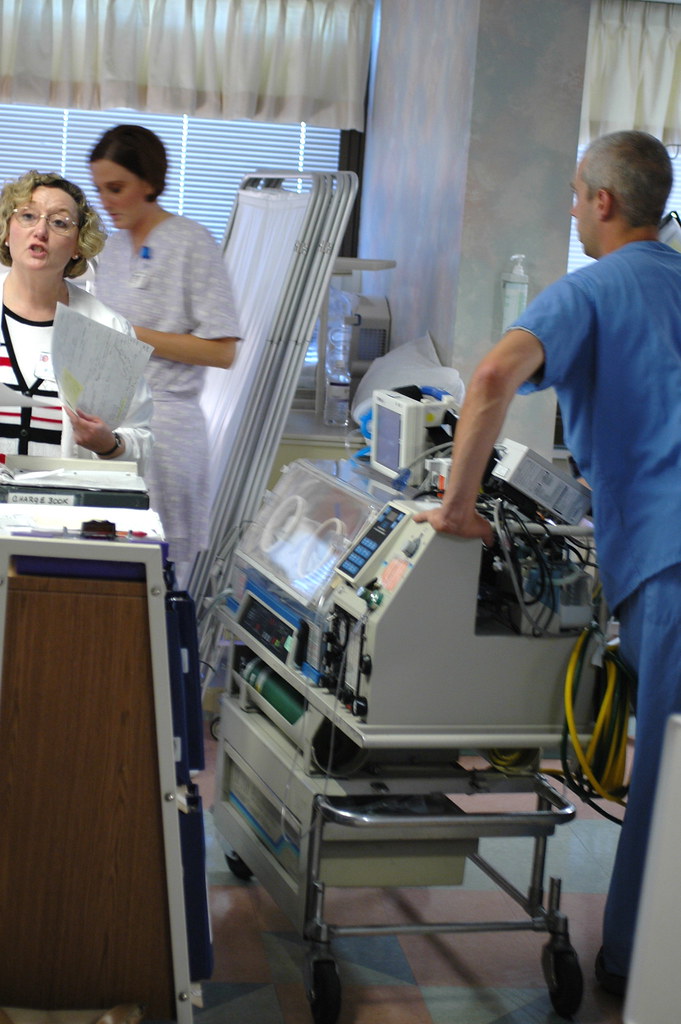 little odin gets wheeled out of the nicu on his way to the elevator and the waiting ambulance. 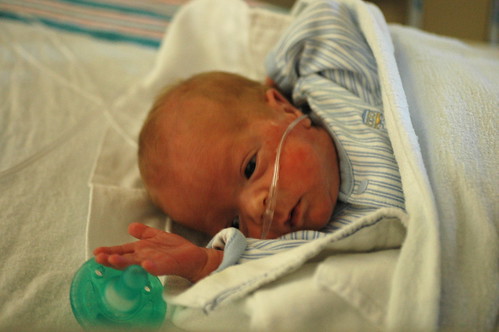 we weren’t able to ride in the ambulance with odin, so we arrived shortly after he was put in his new bed.

he seems to be welcoming us with a hand wave as if to introduce us to his new surrounds. 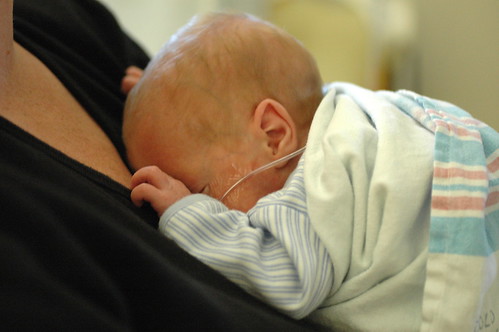 of course it’s not long before he’s resting comfortably on mama’s chest. 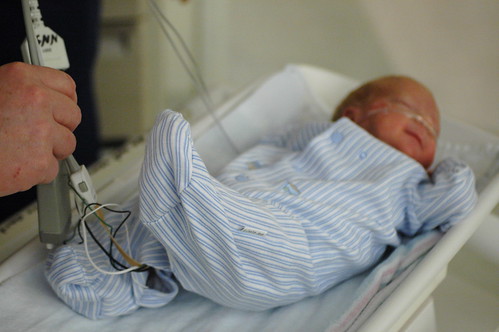 in one of the many differences between the two nicus, eric gets weighed before and after nursing in an effort to more accurately determine how much milk he’s ingested. in theory, the practice should help us to make sure that he’s received enough nutrition, but the scale claims that eric has lost two grams after breastfeeding. so much for accuracy.

oh. i guess i should note that eric is gaining weight so fast that it’s almost starting to freak me out. he tipped the scales at at 4 pounds 9 ounces or about 2075 grams. that’s right – he gained 2 ounces over the last 24 hours and over 5 ounces in the past 48. while everyone is suitably impressed, it’s not good to put that much weight on that quickly, so my guess is that they might reduce the amount of fortifier in his breastmilk soon. 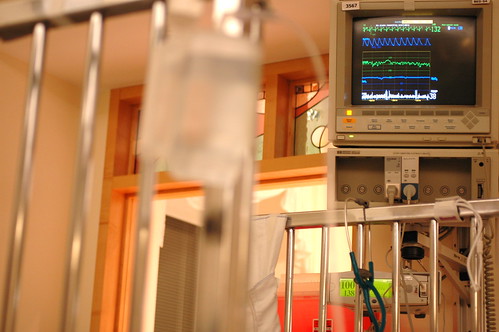 eric’ new bed is stainless steel and the temperature of nicu is a lot cooler than we’re used to which help to add to a sterile, antiseptic feeling.
the new nicu is quite different from the old in many, many ways. while “saints” was small, at 15 beds, little odin’s new home is enormous, with over 100 beds. it also gets a lot of sick babies that are transferred from many different places so it has a much different feel. it’s odd to be thrust into the new environment, trying to adjust quickly to the new rules, while walking around and seeing so many babies with shaved heads and drainage bags, presumably alleviating pressure after brain surgery. the nicu is cooler, literally and figuratively and is much more antiseptically clinical. in a weird way, it also feels like we’ve transferred from the ‘jewel in the rough’, small, personal liberal arts school to the large, top tier, big 10 school. the veneer looks more impressive, but it also seems like it could be quite easy to get lost in the shuffle. time will tell.

uh. so, it looks like i’m incapable of writing a ‘placeholder’ entry. 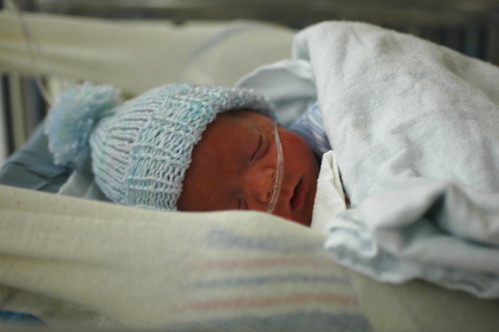 despite all the changes, eric continues to chug his botttle feedings while continuing to look very relaxed.

because the new nicu is kept at a cooler temperature, it’s more important to keep a knit cap on his head and cover him in blankets.

many people have asked me about where they can send postcards. it seems that little odin’s quick transfer has revealed all the procrastinators in the crowd 🙂 for now, if you’ve sent a card that’s already in the mail, i’m sure the staff at saint mary’s will keep it until i can find time to come and pick it up ( in fact, i think they were happy to hear that i’d be back to pick up postcards which would give them an opportunity to hear about eric’s progress ). i don’t know the new nicu’s policy , so i can’t say whether or not people will be able to send stuff there ( i’ll find out more today or tommorrow ). i’m not ready to post my home address on the internet ( i’m not really sure why, since it’s quite easy to sleuth it on the the internet. ), but i’ll probably come up with a solution sooner rather than later. as always, thanks so much to everyone who has sent us or plans to send us a card ( or more! ).

the endless kindness of strangers ( and friends and family, of course ) never ceases to amaze me.