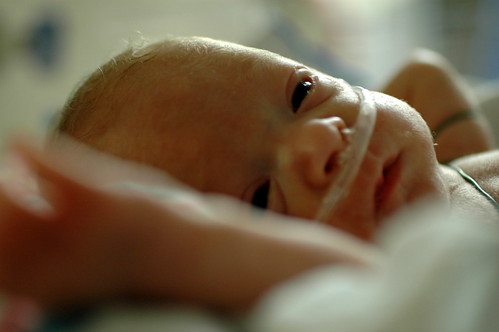 yes, indeed, today was eric’s nine week birthday and by almost all measures it was a fairly quiet day. he’s slowed down on his weight gains and was only up 5 grams over his weight yesterday. the neonatologist has noticed he’s not adding weight as quickly and has therefore once again supplemented his breastmilk with fortifier, which adds 4 calories per ounce without adding any substantial volume. those 4 calories make a big difference, so we should probably see eric start to put on weight again in the coming days. 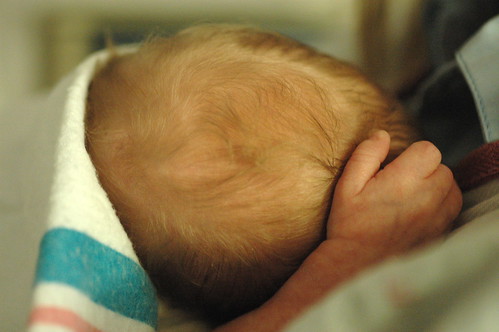 regular readers might remember that eric was due for another exam to determine if he is developing an eye condition known as retinopathy of prematurity. i’m happy to report that there is still no evidence of ROP, which is fastastic news! eric’s eye doctor said after his last test that not only was eric not out of the woods – he wasn’t even in the woods yet. i think now he can be said to be standing on the edge of the forest and he’ll still be at high risk for developing ROP over the next three to four weeks. it’s a great sign that he hasn’t shown any signs yet, but we still have a few more tests to go before we can confidently state that he won’t develop some manifestation of ROP.

we missed the eye doctor during the exam and had to decipher his handwritten notes after he left. somewhat disturbingly, he indicated that there was cloudiness in eric’s ocular fluid in both eyes, but none of the staff could say if this was something to be concerned about or if it was a normal developmental stage that would diminish over time. nobody seemed overly concerned with the note, so we’ll remain calm until we’ve had a chance to clarify the issue with the specialist.

and yes – we’re still getting postcards!