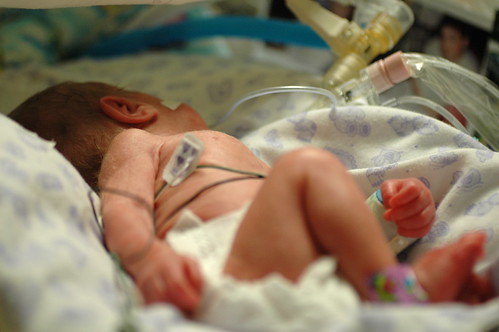 eric seems to be having a tough time catching a break this week. the doctors determined today that the hole in his heart, called patent ductus arteriosis has returned after being closed a few days after his birth.

the hole can reopen due to stressors, such as pneumonia, so it’s more normal than not that it has reopened. he’s still a micropreemie, so his body thinks that the hole should be open as it would be in utero; whenever something stresses his system, his body forgets that it’s been tricked into thinking the hole should be closed and it opens. the treatment strategy will be the same this time as last time, as eric will get 3 treatments of indomethacin at 12 hour intervals ( dose one at time zero, dose two at time zero plux twelve hours, dose three at time zero plux twenty four hours ). after 24 hours he’ll get an echocardiogram to see if the medicine closed the hole. if the hole hasn’t closed after the first round of treatments, they’ll try a second round and then maybe a third. if it hasn’t closed by the third round of treatment, then he’ll need to be transported to a different hospital for heart surgery. 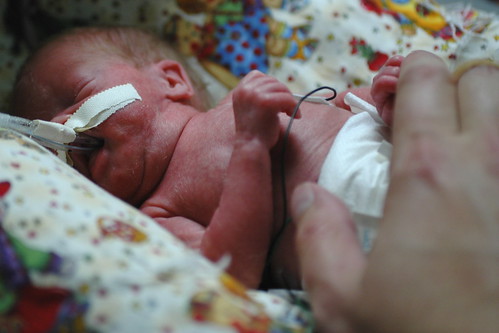 eric responded excellently to the indomethacin the last time we went through this and there’s no reason to expect that he won’t do as well this time, despite having pneumonia. however, it’s impossible to tell for sure before he gets the echocardiogram, late saturday or sunday. although his risk for brain hemorrhage is less with this incidence of pda than it was immediately after birth, it’s not zero and, unfortunately, indomethacin itself can increase the chance of a “bleeder”; so, hopefully it will close as quickly in response to medicine as it did last time, because as a general rule, the less holes one has in their heart the better.

it’s good to see him getting mad again. it’s a little tought to tell from the picture, but his face is turning bright red and he’s trying to push my hand off him. if he wasn’t intubated, he’d likely be testing his vocal cords.

last week he started getting less mad and we thought it was just because he was content. really, it was because he was getting sick. having enough energy to get mad means that he’s getting better.

and check out that double chin. that’s the micropreemie version of getting chubbby. 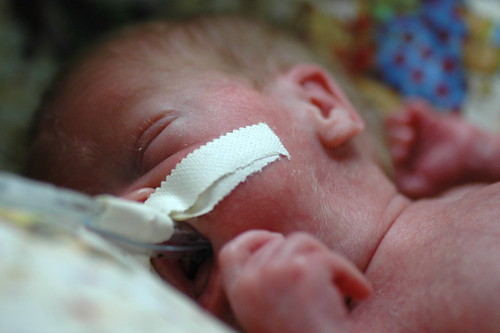 lab results from today also indicated that eric officially has sepsis, or a bacterial blood infection. while running a test to determine if he had abnormal amounts of yeast growing in his blood ( he didn’t, which is good ), they were surprised to find that he had gram negative bugs growing in the culture. considering that just a few days ago, they found two gram negative bugs, enterobacter and klebsiella, growing in his trachea, one would tend to immediately suspect that one or both of them was the suspect bug in his blood. since the bugs were nosocomial, or hospital derived, there’s always the chance that things could get Real Bad, Real Fast; we had hoped that they they’d remain pleasantly colonized in his trachea and not go invading the rest of the system, but unfortunately it looks like the bugs had different plans.

the good news is that eric appears to be responding to the antibiotics that are being given to help him fight the bugs. initially, they were going to give him a 7 day “short course”, but now with the sepsis diagnosis, they are going to continue to give them to him for 14 days. if he continues to respond the way he has been, then this will all be an interesting sidenote, but if not, things could get very, very nasty.

if you’ve continued to read this far, it might be tough to keep a proper perspective, so i’ll summarize the summary. the pda is “normal” and if it closes quickly, there’s little risk of complications due to a “bleeder”. we’ll know within 24 to 36 hours if it has closed quickly. eric’s white blood differentials show that he’s responding well to the antiotic regime for the gram negative bugs that are doing their best to cause him great grief. if the antibiotics continue to work as well as they have been over then 14 days, he’ll probably come through just fine, but if not – well – things won’t be so fine.

despite everything, eric isn’t losing weight and, in fact, gained 5 grams for a grand total of 1080 grams or just over 2 pounds 6 ounces, which is quite a feat for somebody on intravenous fluids and spending all his energy on fighting infections.