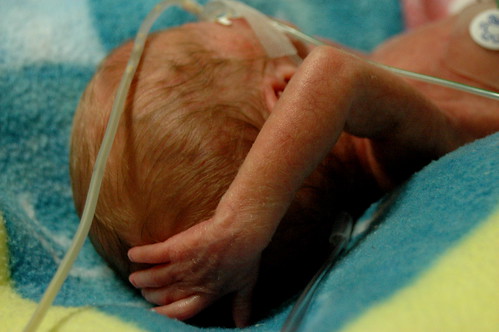 since even before eric’s surprise birth, we’ve struggled with what to name him. i was always a fan of naming him eric c snowdeal IV, because – well – you have to admit it’s a bit of an unusual name; you don’t see many fourths and certainly not that many that sound so nordic. i mean, eric all by itself is a scandinavian name meaning ever-powerful and certainly a last name like snowdeal adds to the effect. and as a young boy, i knew firsthand how much fun it can be to imagine yourself as eric the red, doing the fun things that vikings are supposed to do. and when you get older, you realize that it’s handy to have people not ever forget your name too.

kris, however, was almost never a fan of naming eric, eric. too much confusion. essentially if she were going to yell at us, who would know who she was yelling at (it’s a joke!)? and kris she was very much in favor of naming the baby an “‘ooooh’ name. that’s right. kris likes the letter “O” and thinks it’s entirely underused in the name game. and in what is best described as “woman’s intuition”, kris felt very strongly that the baby should have an “O” name. it’s not like she had visions of ancient people telling her to name the baby an “O” name, but “you know. some people know their baby is going to be a boy; i knew he was going to be a boy and was going to have an “O” name.” go figure. also, given kris’ finnish background and her long time interest in things scandinavian, she also found herself gravitating towards nordic/scandinavian/finnish sounding names.

so, in the spirit of compromise we decided that if we had a boy, we’d name him eric on his birth certificate but give him a nickname that began with “O” to reduce confusion and keep kris happy. as an aside, the night of eric’s birth, we briefly flirted with the idea of naming him “independence” ( and nicknaming him “indy” ), but – i think wisely – we quickly shelved the idea after a few the surgeons and nurses winced when we told them our plans. so we stuck with the original plan. family members also pointed out that being ‘the fourth’ born on the fourth was pretty neat too.

but then we ran into a new problem. we couldn’t find a single boy’s “O” name that we liked. don’t get me wrong, there’s nothing wrong with oliver, but they didn’t seem to fit when we looked at eric and said his name. the choices were even more limited if we looked for names with a scandinavian feel ( with all due apologies to every otto in the world. it’s a perfectly fine name, but it didn’t seem to fit well for eric’s nickname. ) and besides, if you’re going to have a nickname, you had better have a story about the nickname that’s better than, “well, my mom had an intuition that my nickname would begin with the letter ‘O’ and oliver was the least worst choice.”

at some point, my sister-in-law mentioned “odin” and kris immediately took to the name. i was skeptical at first. i’m not an expert in norse mythology, but it seems like naming your child after a norse god is just asking for trouble. but kris didn’t care. she liked the name and didn’t really give one wit if a norse god already had it or how much people might scratch their heads when they heard it. though she said that she hadn’t officially decided, i could overhear her over the past few weeks, calling eric by odin on an increasingly frequent basis; so i knew it was going to be an uphill battle ( ahem. that’s a not-so-subtle odin pun. ).

a few days ago, kris sent me a link to a site about the norse god odin and it didn’t do a whole lot to convince me that it was a great idea. sure, there’s a few qualities that seemed metaphorically appropriate, but once again, it seems like your asking for trouble when you give your child the nickname of a norse god whose job description is, in part, to usher the dead to the netherworld. one can imagine him using the, “look. i’m odin! if you don’t let me go over to sarah’s house and watch reruns of “the dukes of hazzard”, i’m going to have to go get thor. and you know what that means. whoopass.” at every chance when he gets older.

and so today in the nicu, as i was getting ready to potentially dig in my heels and more strongly suggest the merits of more traditional “O” names, kris started to gesticulate wildly, letting out bursts of “oooh. oooh.” and trying her best to nonchalantly point to the young family at the bassinet across the way. as i’m looking trying to figure out what on earth had her so excited, i could finally see it. tattooed on the father’s calf we could clearly see a large, bright rendering of odin’s knot. the very same odin’s knot that we saw at the top of the website about odin just days earlier. neither of us had seen the symbol before we visited the website and certainly didn’t know of it’s association with odin and hadn’t ever seen the tattoo on the man’s calf.

don’t get me wrong – i’m not attaching any Great Metaphysical Weight to the coincidence. as i’ve said before, i’m a skeptic’s skeptic and usually fall into the camp of people who think that it’s a big universe and based on the laws of probability alone odd and funny things will happen on occasion ( i can see legions of family members simultaneously gasping and clasping their hands to their mouths in horror, but really, it shouldn’t be too much of a surprise after all these years. i guess it would be important to point out that i’ve also never been able to disavow myself of the rumsfeldian notion that while there are many things that i know that i know – there are many, many more things that i don’t know that i don’t know. i just don’t know how to know what you don’t know that you don’t know. you know? ) in any case, getting back to the point at hand, i’m not inclined to think spooky “things that go bump in the night” types of thoughts about the whole situation, but it does seem like if you’re contemplating nicknaming your child odin and you find out that the people sitting next to you in the nicu are odin’s number one fans, you simply can’t not name him odin, if not only because it breaks the rules that one must follow when one Happens Upon A Great Story.

now, i’m still slightly wary of nicknaming our child after a norse god, but kris likes it, we get to fulfill her woman’s intuition, and it most definitely has a great story. and that’s why – when eric gets older and he introduces himself – he might just tell you that he’s otherwise known as odin.

update: super mega bonus points will be awarded to whomever sends eric a postcard from either odin, illinois or odin, minnesota.

One thought on “the eric update – day 21: otherwise known as odin.”