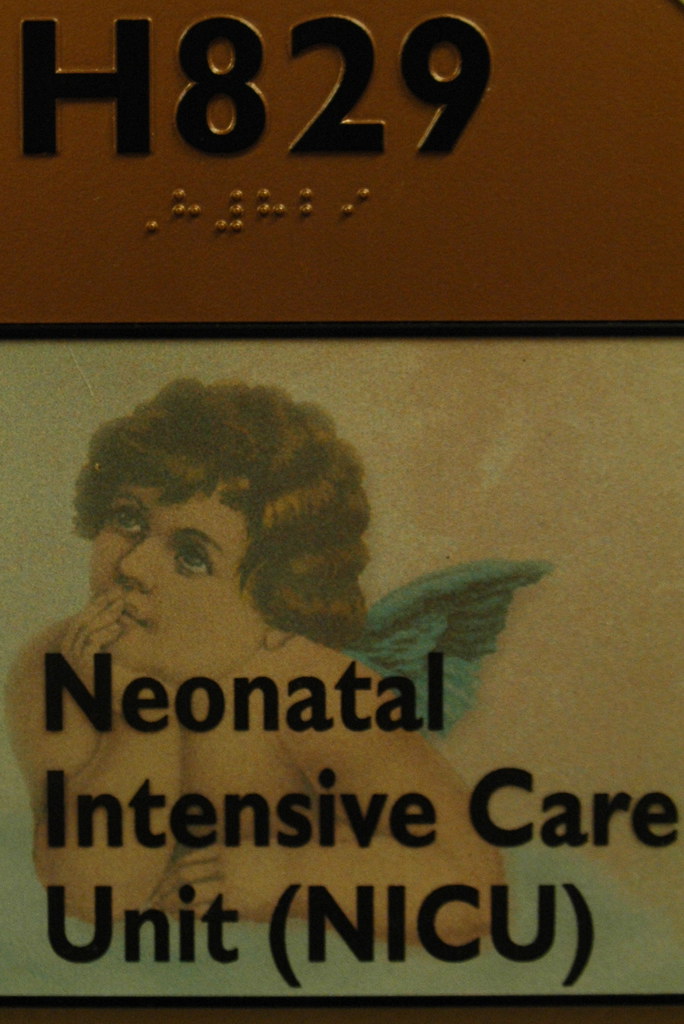 on a day that statistics will tell you will probably be a bad day, we received some great news! at noon, we found out that the hole caused by the patent ductus arteriosus (pda) had closed in response to the medicine they gave him over the previous 24 hours. so, at least for now, there doesn’t appear to be any reason for him to get transferred to a different facility for surgery. he also has a greatly reduced risk for a class IV “bleeder” ( our neonatologist’s term for a brain hemmorage ). one of the side-effects of pda is that it sends five times more blood to the brain than is actually necessary, which in turn stresses the brain vessels. he’s still at risk for a bleeder, but much less so.

speaking of brain hemmoraging, when our neonatologist was explaining the effects of pda, he took the opportunity to launch into a discussion of bleeders. it turns out there are four classes of them, with ‘class one’ being not visible with the naked eye and not typically associated with negative outcomes and ‘class four’ being visible through the scalp and often fatal. in what was one of the many conversations we’ve had over the past few days that can be quite disorienting, we found ourselves listening to him calmly tell us that he probably wouldn’t even bother telling us about class one or two bleeders, as he’d end up driving us insane with that much detail. 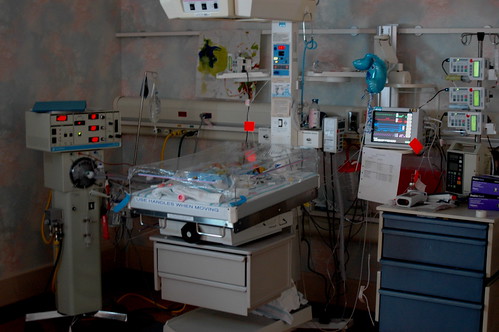 there are many other physiological consequences of the ductus arteriosis closing , the most notable being that they can reduce the percentage of oxygen that he’s getting via the ventilator. we normally breath air that has 20 percent or so of oxygen. for the past few days, eric has been getting anywhere from 30-60% oxygen. after the duct closed, they were able to move towards a schedule of letting him breathe ambient air with occasional enrichments of oxygen. also, they have been actively managing his blood pressure with dopamine and his blood sugar with insulin and they’ve stopped both of those treatments. later in the day, they also told me that they stopped giving him antibiotics to reduce the risk of infection. these are all stupendously wonderful signs that he’s stabilizing and setting himself up for the long haul. of course, he’ll still have bad days and downturns, but things are looking positive.

as donna, eric’s nurse today, was giving me an update about the pda and how good things were looking she stopped and laughed, “you know – he’s not a wimpy white boy!” she went on to explain that, when compared to other races, white male micro-preemies ( a technical designation for preemies that are born less than 26 weeks in gestational age and weigh less than 1 pound 11 ounces ) typically get more sick, have more bad days and have longer hospital stays. “i’ve been doing this for over 20 years and i don’t think i’ve ever seen an explanation for it. but lil’ eric ain’t no wimpy white boy. and that should make you very happy.” 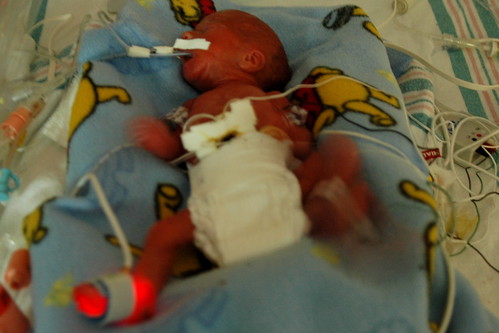 unfortunately, kris is still not progressing as quickly as she’d like and she’s three days post delivery, which means perfectly natural post-partum emotions are beginning. a bad morning was made worse when the nurses told her they didn’t want to even try to see if she could make it down to see eric, given her current condition. she’s still at an increased risk for a seizure if she has too much sensory stimulation, so they want her to have another day of quiet rest.

her blood pressure is still dangerously elevated even after starting an additional blood pressure management medicine; her platelets has also been down throughout the day, while her liver function is elevated, all of which are trends in the wrong direction. it’s nerve-wracking to anticipate each new lab result and continually discover that she’s not only not stabilizing, but technically getting worse ( although thankfully she’s not in any pain ); however, the doctor reassured us that she’s not atypical for cases of severe preeclampsia such as she developed. he expects her to have another day or two of trending in the wrong direction, followed by a gradual normalization process. first her kidneys will start working more efficiently, followed by better liver function and finally her platelets will go back up. he said her kidneys are looking better, so we’ll patiently wait for the others to follow.

her doctor also gave us a little more information about the specifics of her case. about 10 percent of preeclampsia cases have similar etiologies and, as we discovered, if the baby isn’t delivered immediately it will die and the mom will quite likely die. to highlight the point, as a consequence of the disease process, kris’ placenta had become 30% calcified over a very short time ( possibly 24 hours ). had we waited even a short period of time to go to the ER, the placenta would have become completely calcified and eric would almost definately have died from a lack of oxygen. it’s also more likely than not that an undiagnosed underlying condition will be found that is known to amplify the effects of the preeclampsia ( essentially “causing” the severe “10 percenter” cases ); so, after everything settles down, they will start testing her to see if they can find the root cause. 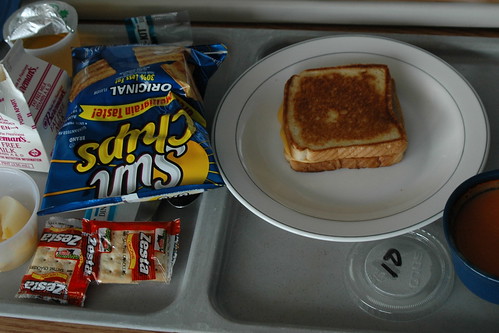 amidst all the disappointing lab results, kris is feeling better and making other important signs of progress. she’s started to regularly produce milk with a breast pump, which is getting stored down in the nicu ( neonatal intensive care unit ) for when eric is stable enough to start feeding. she also had her first solid food today, after days of nothing but an IV and the occasional juice. she happily enjoyed what would have otherwise been a bland cheese sandwich. and she also had her catheter removed! if you’ve ever had a catheter, you’ll understand why this made her very happy.

update: later in the evening kris finally got her first set of postive lab results and her blood pressure, while still high, seems to be gradually trending downward. her results are promising enough that they aren’t going to pester her every few hours over the night to draw blood and it looks like she might have a realistic chance of seeing eric some time tommorrow.

nope. “the fourth” doesn’t like his diaper ( called a “wee pee” ) changed. in fact, he’s pretty pissed off and has instantly transformed himself into a kicking, writhing, squirming ball of flesh. if he wasn’t hooked up to the ventilator, i’m quite sure he’d be howling. his nurse says it’s good to see him get agitated every so often. but not too often. 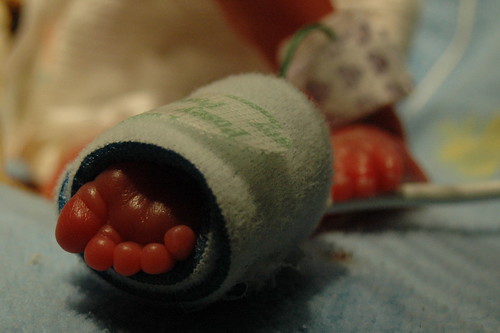 time is something that i don’t have a lot of, so i’d like to thank everyone who has commented and sent an email. i won’t be able to respond, but please know that it really, really means a great deal. kris didn’t progress much today and spent much of the day sliding in the wrong direction. she’s out of life threatening danger, but everyone is hoping that things start to look better tommorrow. of course, she’s not able to see eric, which is the hardest part for her to bear.

eric took an expected turn for the worse in the morning, but gained some ground over the remainder of the day. his liver is not working as well as it should so he’s susceptible to jaundice. he was a little “jaundice yellow” this morning, but got more pinkish over time.

more significantly, eric has a “normal” condition known as patent ductus arteriosus (pda) , which is essentially a hole in the heart that needs to be closed. over the next few days, the doctors are trying to close the hole with medicines, but if it fails then he will need to get heart surgery. if they don’t close the hole quickly, he has a much higher risk of brain hemmoraging, so we’re obviously waiting anxiously to see if the medicine works.

since kris can’t see eric yet, i’m taking pictures everyday and tranferring them to her ibook, so she can constantly see how he’s doing and what he looks like. i’ve uploaded some of them to my flickr account so that friends and family [ and any others ] can stay abreast of his development. i hope to revamp parallax to keep a daily running journal of eric’s development. i assume that this will mostly be of interest to close family and friends who are scattered around the world, but even if you don’t know us, feel free to cheer along. every little bit of support helps.

kris enjoys flowers so please send them to:

we’ve recieved flowers from “eastern floral and gift shop” ( 616.949.22000 ) so i know that they know how to get flowers to the hospital, but i’m sure other florists in the area can get a bouquet to her. even if you don’t “know” kris, i’d be mighty obliged if you sent her flowers. she could really use the uplift. i can’t stress this enough. if you have the slightest inclincation as to what kris is going through, please, please send her flowers. she can use any little but of support she can get. thanks. 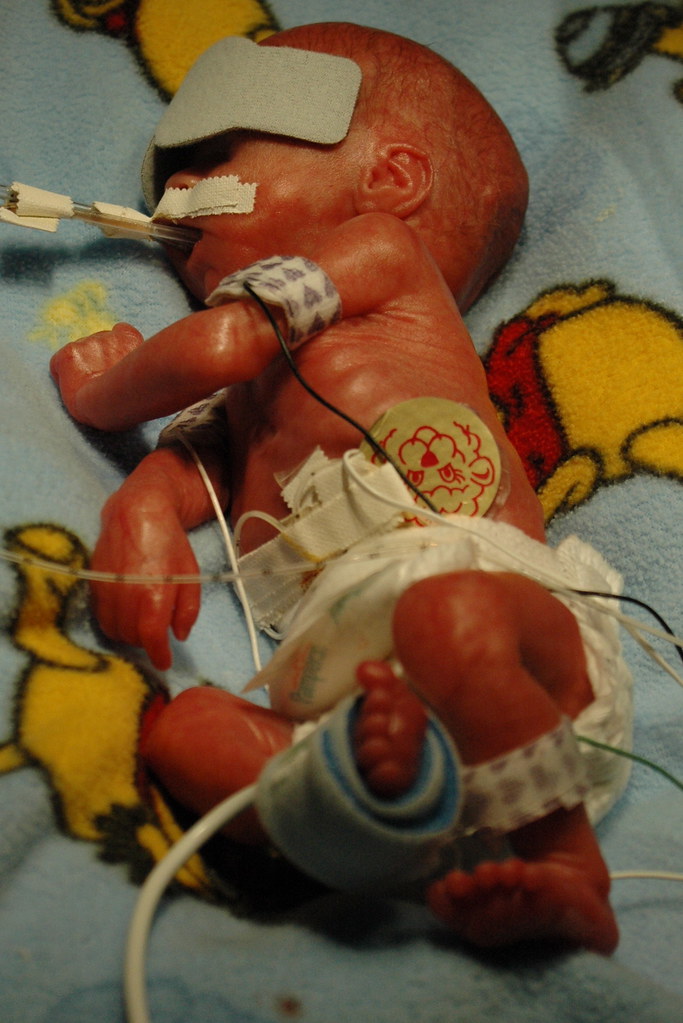 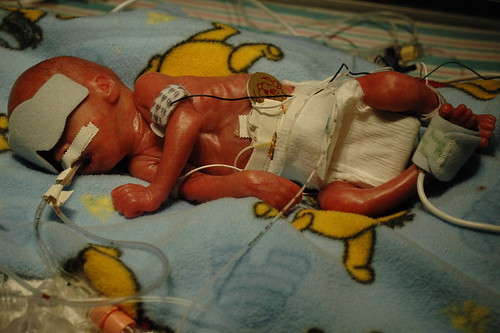 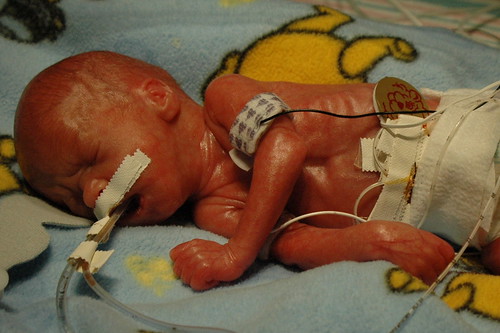 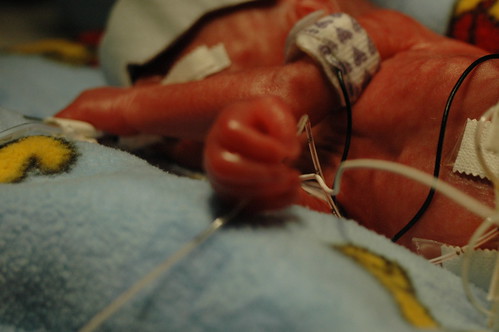 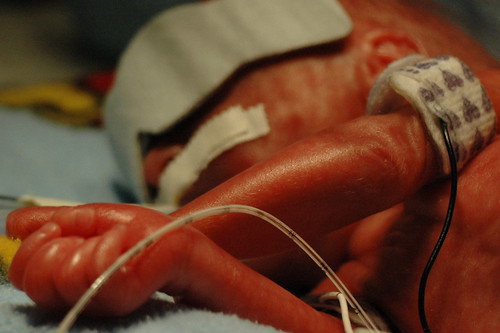 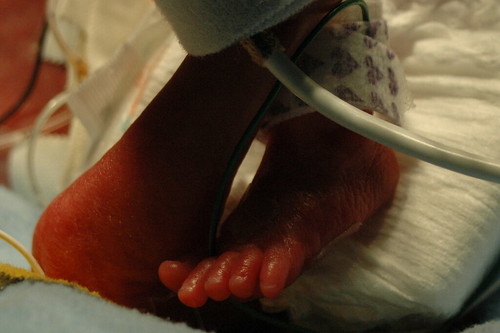 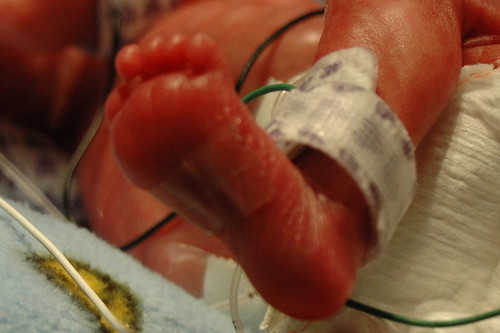 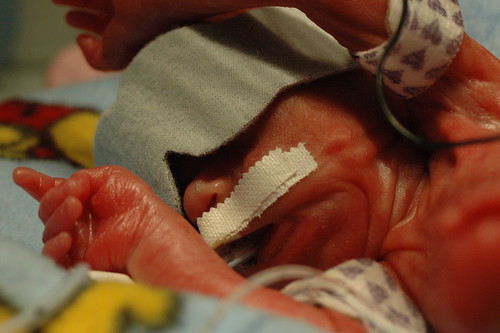 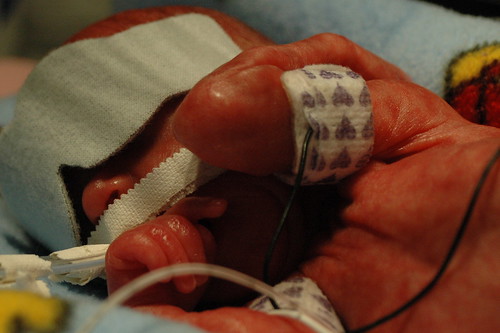