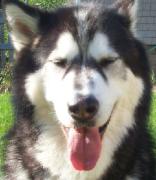 what’s my boring life like outside the nicu? well, here’s a couple of glimpses that both involve walking the dogs. with four large dogs in the house and no fenced in backyard, you can imagine just how much dogwalking there is to be done. at a bare minmimum they all need 3 walks a day totalling somehere around 2.5 miles. gina and diane (and ruby) help out a lot, but i to still get my (un)fair share of walking a day, of not only because walking 2 miles a day is a Good Thing.

last sunday, i was walking a typical route, not particularly paying attention to anything as i’m lost in thought about the day’s tasks at hand. as i’m walking up logon street, passing the meyer may house, getting ready to cross onto madison, i find that i have to pay attention in order to not fall into a hole left by the missing curbs ( a funny story itself, someone has decided that the curbs and driveway entrances on our block are not historically accurate, so they’re tearing them out and putting in new ones that look suspicously similar ); as i’m getting ready to step over the hole, trying to manage two large dogs ( a 105 pound malamute and an 85 pound bernese mountain dog ), i hear screaching tires, followed by racing engines. but i can’t quite see what’s coming up the street, because of all the trees and shrubbery in the way. so i continue to step out into the street just in time to see a truck pass by at about 90 miles per hour ( not really 90 m.p.h. but that’s what it seemed at the time since it was only a few feet away ) followed by two cop cars literally in “hot pursuit”. i could hear them continue to race down the street as i wondered what would have happened if the timing had been any different. later i would learn that it was this guy and that he crashed into a police cruiser just about a half a mile down the street. surprisingly, i didn’t hear the crash. you don’t see that everyday, now do you? too bad i didn’t have my camera.

aside from almost getting run over during a high speed chase, most dogwalks are quite unexciting. sure, they like killing small land animals and might pull you down the street in an attempt to maul a cat or squirrel or skunk, but usually it’s just a plain-vanilla walking and poop-picking-upping. and with the poop-picking-upping, you don’t want them to “get the runs” for all the reasons that you can imagine. so, it was with much dismay that i found mauja squatting multiple times and leaving runny, stinky messes everywhere. odd. i thought. hopefully he’s not getting sick.

diane would later ask me if any of my dogs had runny poops. “aha!” she said, when i told her that, indeed, mauja just did. “i suspect that means he’s the one who ate the four sticks of butter off the counter today.” the next day, gina would tell me that his poops would get worse. much worse.

so, if any of our nicu nurses reading this, you can blame mauja for your not getting the multiple loaves of zucchini bread, as he ate all the butter in the house and nobody has time to go out and get any more before the zuccs go bad.