watching the school band pass by in the westby homecoming parade from newish work digs and i can’t believe they missed the chance to bust into a few bars of john mellencamp’s small town. 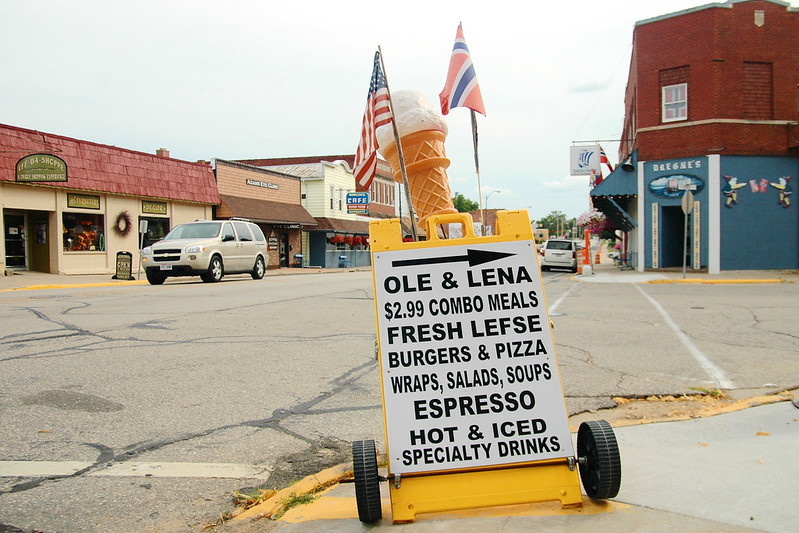 our post fire work digs in westby, wisconsin are in the building behind this sign for ole & lena kaffe hus ( fresh lefse! ). across the street you can see the uff-da mart and dregne’s scandinavian gifts. it’s the holiday season which means it’s time for another trip to snowy ridge our favorite christmas tree farm! only there wasn’t any snow. boo. at least it wasn’t muddy.

odin picked out a fine looking white pine for our family tree. he’s holding the tree while i lay in the ground with the saw after he gave up trying to cut it down himself. maybe next year! of course he’s totally used to me saying, “oh hey, wait, let me take a picture!” haulin’ the tree out… time to start the process over again with the second smaller tree that will go in odin’s room. he gave another go at cutting down the tree and almost made it through before running out of steam. i bet he’ll do it next year and this will actually end up being the last year i cut down a tree for a while 🙂 happy to be haulin’ both trees out… it’s a long walk back to the car so i guess i should lend a hand. but just one. the other one is for the camera. then it’s finally time to ride the zipline! they took the tree down and built a bigger platform. we’ve been doing this for six years and i still marvel at the genious of combining a christmas tree farm and a zipline. it’s a magical memory maker. seeing this treehouse every winter partially inspired our wanting to build a treehouse with a zipline. as we do every year, we ended our visit in a cabin warmed with a wood fire and enjoyed a cup of hot chocolate and more than a couple of cookies.

thanks once again to the folks who run snowy ridge for all the great memories.