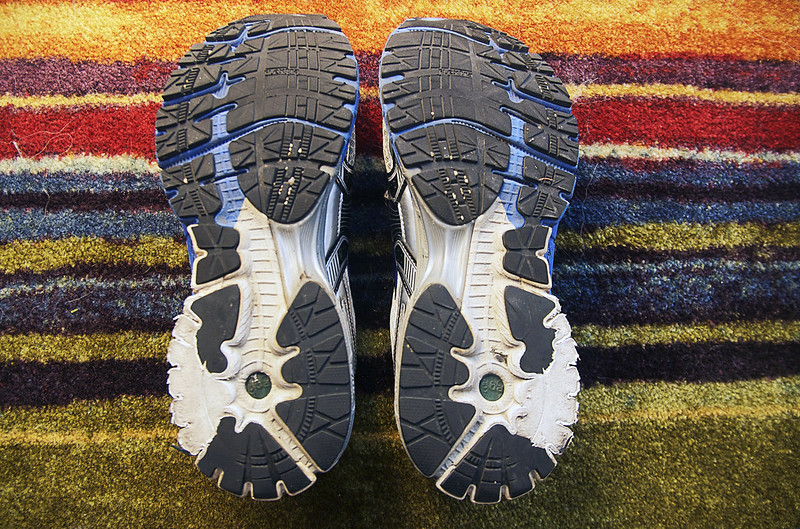 for a couple of months, i’ve had an on-going issue with my hip flexor muscle. it was not happy and letting me know which was cramping my running style. normally, when you run into a repetitive stress issues you try to take some time off. i tried. really, i did. i resolved to take a month or more off from running but the reality was that i’d take a week or so off and go for a run and realize it was the wrong decision.

turns out my “just so story” is that the problem wasn’t so much a repetitive stress problem with my hip flexor, but rather that i put 500 miles on running shoes which was too many. for reasons that a sports physiologist can better explain, putting too many miles on my shoes caused my calves to tighten, which led to running just a wee bit flat-footed, which led to my irritated hip flexor muscle.

new shoes, running a little slower, focusing on my form and working on loosening my calves has worked wonders. i ran first 12 mile run in months. felt great! whooooooooo!

many people have different opinions about when the best time is to switch out shoes. over thousands of miles of running, 300 miles seems like best time for me. i can get away with 400 miles, but 500 is too many.

hopefully i don’t forget that. again 🙂

if you’re a runner, how many miles to you put on your shoes? odin has had a skateboard for many years, and while he’s jumped on it from time to time it’s never really captured his attention the way his ripstik has, mostly i think because many of his friends and cousins have ripstiks.

he’s known that i used to skate a looooooooong time ago but hasn’t ever asked me to teach him to skate and i’m certainly not interested in pushing it on him. i figured someday he might ask and if he did i’d be happy to show him a thing or two.

recently he decided he wanted to order a pair of vans for back to school shoes. i thought it was curious, since he’s never shown an interest in wearing his poppi’s favorite brand of skating shoes ( yes, i still wear vans even though i haven’t skated in years. i like the brand and genuinely think they are some of the most comfortable and durable shoes around ). i wondered if there was something more to his choice and, sure enough, when they arrived he asked if i’d show him some basic moves and tricks.

much to my suprise, i jumped on his board ( my first time on a deck in well over a decade ) and showed him how to push off, tic-tac ( move the front of the board back and forth to gain momentum ), do a 180 shove-it a little ollie and a backside nose stall on the curb. i’m not sure who was more impressed that i didn’t hurt myself – him or me 🙂

i’ve actually been thinking about starting skating again for a long time. i used to love skating but stopped in my early 20s because of a bum knee from the cumulative toll from a car accident ( not wearing my seat belt! dumb! don’t do that! ) and skating injuries. in my early 30s when i started training for marathons i learned i could cure my bum knee with physical therapy. but then i stopped running marathons, gained a bunch of weight because i kept eating like i was still running marathons and started to feel like i was too old and out of shape to skate.

now that i’ve lost 110 pounds and am in better shape that i ever was in my 20s, i wonder about picking it up again in a low-key way. odin asking me to teach him a few things is all the excuse i need.

so who knows, maybe i will do boardslides while wearing sunglasses after dark once again. only this time, with odin.