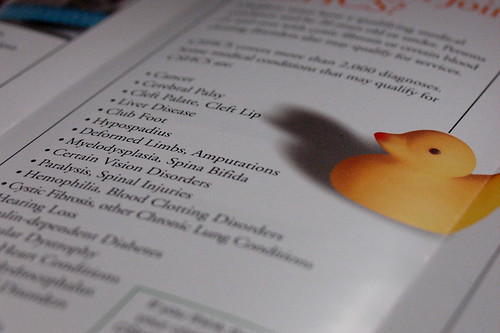 as soon as you set foot into the emergency room, the meter starts running. well, actually, if you take an ambulance, the meter starts running before you step into the emergency room, which is why we drove to the ER, since i didn’t want to have to pay a $700 ambulance bill that the insurance company would deem unnecessary ( at the time, we obviously didn’t realize just how necessary it could have been ). amusingly, when we first arrived at the the first hospital we realized that, cleverly, we had both left our insurance cards at home. and throughout the first couple of hours, i would wonder if there some sort of obscure loophole with our insurer that would allow them to deny coverage because we hadn’t given them the card immediately.

throughout the first few days, we would find ourselves thinking ( or more correctly, trying not to think ) about how stupendously expensive the whole process was going to be , whether or not st. mary’s was in our “network” since we transferred from an “in network” hospital and didn’t know a thing about our new hospital, or even whether or not any of our doctors were “covered”. most importantly, we also didn’t know if we had an “out of pocket maximum” with our current insurance plan. about the only thing we did know for sure was that kris has enrolled in a special maternity plan that changed our coverage from 75% to 90%, but only for care provided by “in network” doctors at covered facilities. at one point, right before kris was getting wheeled into the operating room, i remember her exclaiming “you better check and see if our insurance is going to pay for this!”

on the second day at the nicu, our new family counselor gave us a form and told us that we were lucky to live in a state with a loophole in the state medicaid law that allows anyone, regardless of income, to qualify for medicaid reimbursement for “some” of the bills ( note the use of the suspiciously vague word, “some” ), if patient is in intensive care for more than 30 days ( i believe that the loophole is the result of AARP lobbying muscle and was initially intended to cover elderly patients, and micropreemies get to take advantage of poor legislative language ). “trust me,” she said. “his bill for 3 months in the nicu will likely be over $200,000, and you don’t want that bill, so be sure to fill out this form and get it submitted.” kris and i exchanged glances and blurted out, “two hundred thousand dollars!”, as we simultaneously did the mental math about how much we’d owe after insurance paid their piece and if medicaid paid nothing.

in addition to the medicaid loophole, we would also discovered that there is a separate program which used to be called, very politically incorrectly – the crippled children’s program – but which is now supposed to be referred to as “childrens’s special health care services” (CHSCS). they must have changed the name recently because nobody calls it CHSCS, as it’s simply called “crippled children’s”, as in “don’t forget to fill out your paperwork for crippled children’s”. in any case, CHSCS is a form of supplemental insurance for the specialist care that eric may or may not need after he gets home ( i.e. speech therapy, physical therapy etc. etc ). the first year is free and then i believe we would need to pay a premium if we decide we want to stay enrolled.

so that’s the context we had over the first few weeks we knew we had a good chance of getting something paid by someone, but still didn’t know any specifics of how much our insurer was going to cover because we weren’t at a covered hospital and i imagined that the insurance companies probably had complicated rules associated with payments for referral services. but kris and i did what we do best on occasion and procrastinated on getting any specifics because; a. there wasn’t anything we could do to change the situation and b. hearing that we weren’t covered and medicaid would only pick up half the bill was not something we could conceptually handle at that particular time. in other words, we were engaging in some good, old fashioned, denial and avoidance behaviors.

a few days after we learned about CHSCS but before we leaned any specifics about our insurance coverage, i was chatting with a nurse about The Bill and insurance and how it was nice to at least have the prospect of getting money from a few sources to help defray costs. “oh yeah.” she said. “because his bill will run, hmmmmm, let me see. i’d guess that he’ll probably have a bill of $1 Million Dollars. maybe more.” if i hadn’t been sitting down, i probably would have fallen over as i heard “One MILLION DOLLARS!” bouncing around my head in what sounded like a dr. evil’s voice.

so, it would seem that the family counselor had already done the math, knowing that we had insurance, coverage and was telling us the number that most people could get saddled with after insurance pays their cut ( and note that this number doesn’t include kris’ care). no wonder she kept pestering us to get the medicaid paperwork submitted as quickly as possible. suddenly, getting specifics seemed a whole lot more important because i was fairly certain that i wasn’t going to be sleeping any better, if i had to think about paying a two hundred thousand dollar nicu bill.

it took a frustratingly long time to get the answers, but it turns out that we will may not have to pay one red cent for his care. our insurer will pay 90% of his nicu bills ( it turns out that st. mary’s is “in network” after all ) and 75% of the cost of his neonatologist bills ( weirdly, his visits by the neonatologist are not considered part of his nicu care ( even though the visits are done in the nicu) and he’s not an “in network” doctor ( even though he’s at st. mary’s with is an “in network” facility. easy to follow, huh. ), so we get the “out of network” coverage rate, which turns out to be 75%. of course, the number left over is still a hefty one, but the fine people that answer questions about my healthcare plan have told us verbally that we have a $2,500 “out of pocket maximum” and that’s not going to change. and we can submit the $2,500 to medicaid and the person who does hospital billing said that they would likely pay every last bit of it. in fact, according to the hospital billing department, medicaid will pay nearly all of the difference between our “out of pocket maximum” and the percentage paid for by our healthcare plan. what medicaid doesn’t pay, she casually explained, they write off. so, even if i were to lose my healthcare coverage, it sounds as if medicaid will pay the bill.

having heard the horror stories of the bills that families have when they leave the nicu, we feel a little guilty that we will probably not have to worry about it. we know we’re tremendously lucky to have a great healthcare plan ( incidentally, my fantastic insurance is provided motorola who owns the plan but contracts it out to humana. motorola has always been, and continues to be, the kind of company that encourages healthy, happy employees – they even encourage breastfeeding by making it very clear that they will subsidize a breastpump! go moto! ) and live in a state that will foot the bill, even if we didn’t have such fantastic healthcare. ironically, in this sense, we’re “fortunate” that he was a micropreem and will be guaranteed to stay in the nicu for much longer than 30 days.

in some strange, conflicted way, it’s hard to not feel sad for the parents of the preemie “multiples” who are relatively healthy and stay for under a month, as they will leave with a hefty chunk of a bill, even if they have fabulous insurance ( obviously they don’t give two or three for one offers in the nicu). if i had to guess, i’d bet that they often end up with bills between a hundred and two hundred thousand dollars, which would be frightening to contemplate paying as you’re trying to think about how to how to feed and cloths two or three new babies.

hopefully nobody will comment about how i’ve missed a small detail and will actually owe One MILLION DOLLARS!.

meta: obviously this post is quite a bit longer than the others. of course, i’ve been working on it for awhile and didn’t write it all today. i do have other things to do 🙂