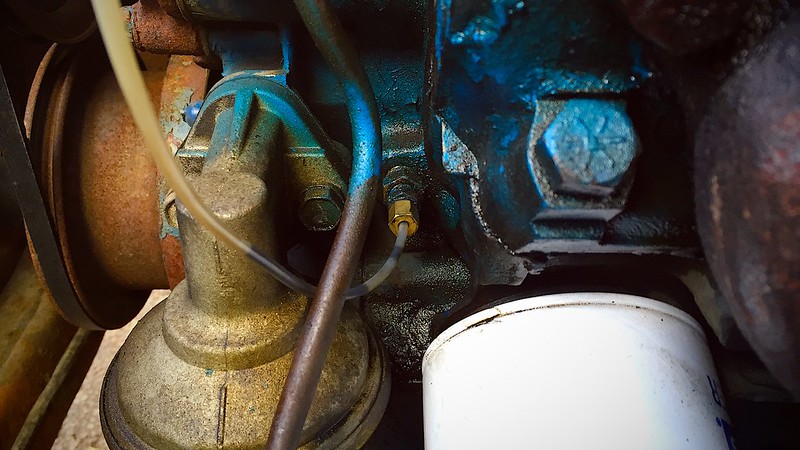 i found the cause of the oil leak in the galaxie and determined i could remove the broken line without draining the oil so i installed the new line that i purchased at our local auto parts store for 10 bucks.

there wasn’t much space to work, so i lucked out when i discovered the new part just screwed into the old part directly attached to the engine block. it would have been tricky to remove. 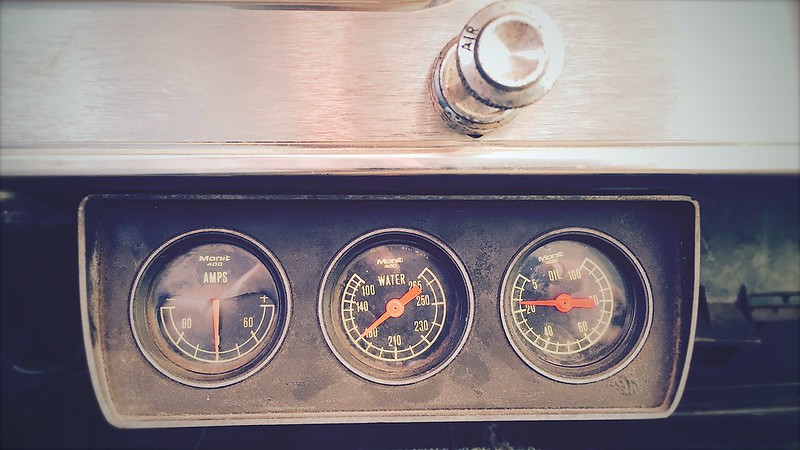 the other end of the line attaches to the oil pressure gauge mounted under the dash. i attached the line with a new appreciation for the fact that this means i’m pumping pressurized oil into the cabin of the car. what could possibly go wrong!

success! the pressure seems about right while the car is idling, though i wonder if i’m supposed to bleed the air out of the line. i’m not sure how to do that without getting oil all over the place so good enough for now!

part of the reason why i love having a 50 year old car is that i can fix many things on my own without needing fancy computers or equipment. 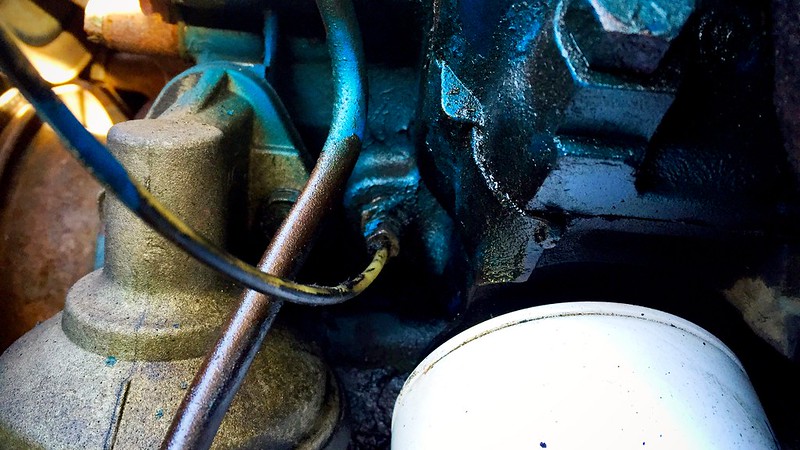 i think i know the answer to this, buuuuuuut, can i remove the oil pressure line without draining the oil and not get a pool of oil on the ground? the line is maybe a third of the way up on the engine block right next to the oil filter. the engine is cold and all the oil has drained to the bottom of the engine and the oil pan so i think the answer is yes?

update: response back from social media is that i shouldn’t loose much oil if any by removing the line without draining the oil. 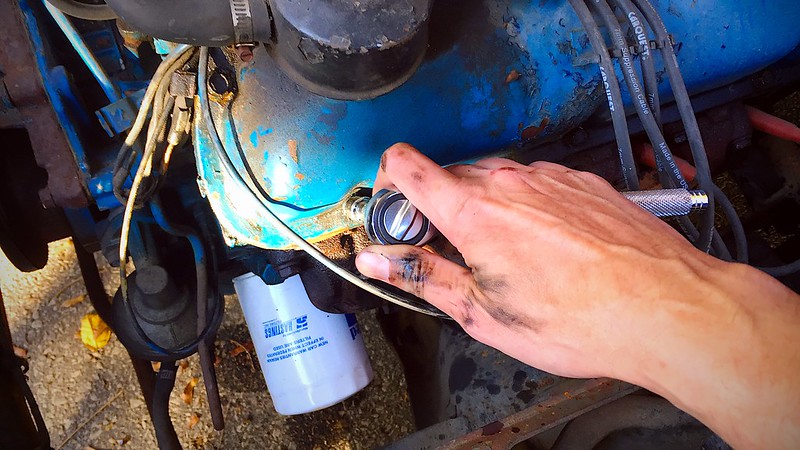 i’m troubleshooting the leaking oil in the galaxy 500 and my first thought is that a deteriorated valve cover gasket is causing the problem. the engine exhaust doesn’t smell sweet and there’s no oil in the radiator fluid so it’s unlikely to be a head gasket issue.

when i went to the local auto parts store, the guy behind the counter said he’d love to sell me a valve cover gasket ( only $20 ) but asked if i had tightened down the valve cover bolts recently.

“uh, nope. and to be honest i couldn’t remember when i would have thought to tighten them.”

“give it a try. i’ve seen valve covers so loose that oil starts seeping out.”

i went home and sure enough the valve cover bolts were so loose that i almost couldn’t believe the covers stayed on! i was sure that had to be the cause of the leak since the oil seemed to be coming in out of the bolt hole that had one of the loosest bolts. it couldn’t be a coincidence!

so i tightened the bolts, cleaned up the oil that leaked on the block and started the engine.

the result? the oil was pouring out of the same area faster than ever! what was going on? i couldn’t quite tell because it was hard to watch the oil leak and start the car at the same time but it didn’t take too long to figure it out. 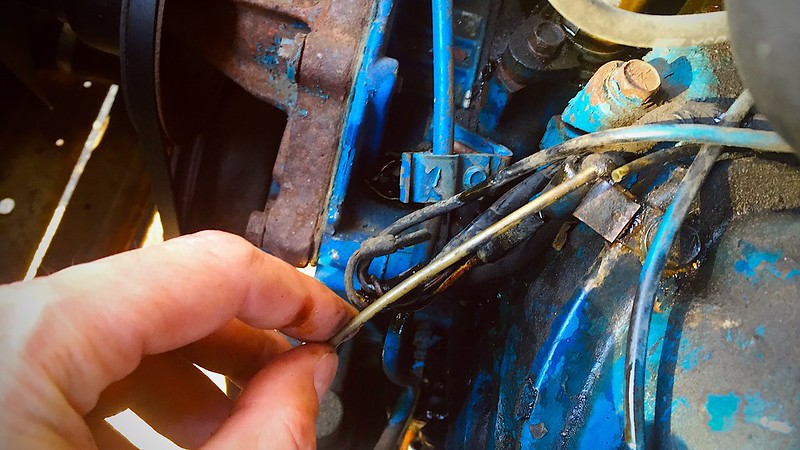 while i was poking around i discovered this line appeared to be completely severed! it wasn’t obvious at all that it was severed because it was running through the clip attached to the bolt that seemed to be the main source of the leak. i turned the engine over and sure enough oil came spurting out of the lower section of line that emerged from the engine block. the line looked like it went into the main cabin bundled with a few other lines. i wondered why pressurized oil would be going into the main cabin and it took me a few seconds to come to the rather obvious conclusion.

it’s the line for the after market oil pressure gauge that sits under the dash. it must have developed a small crack right under the clip that held it in place and i broke it completely when i cleaned up the oil around the bold holding the clip. 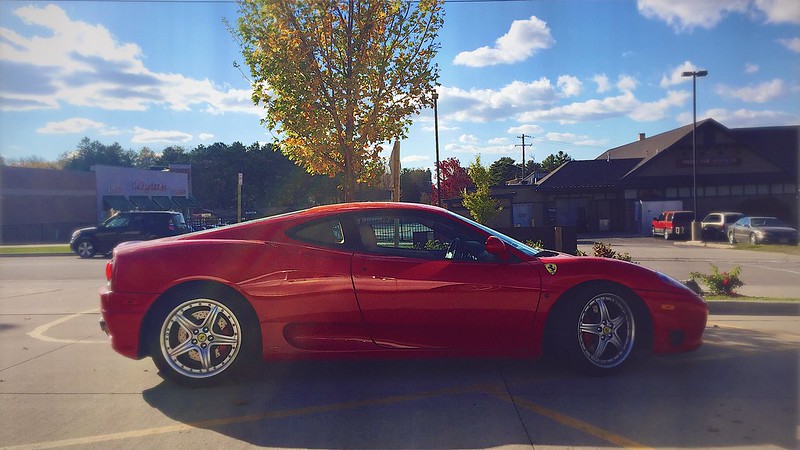 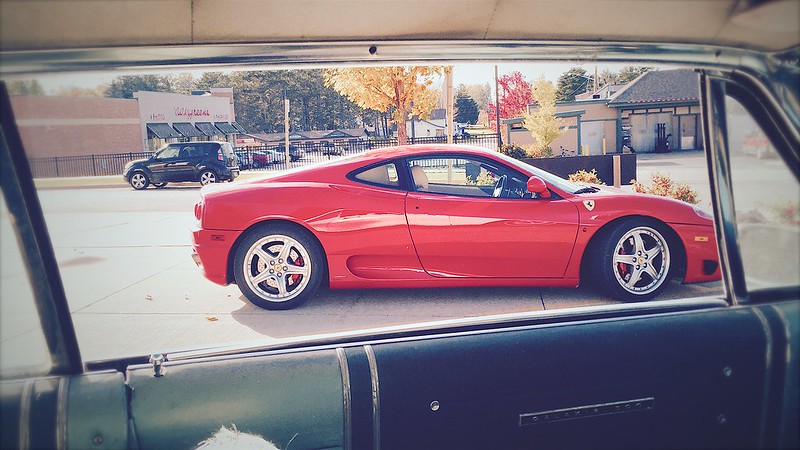 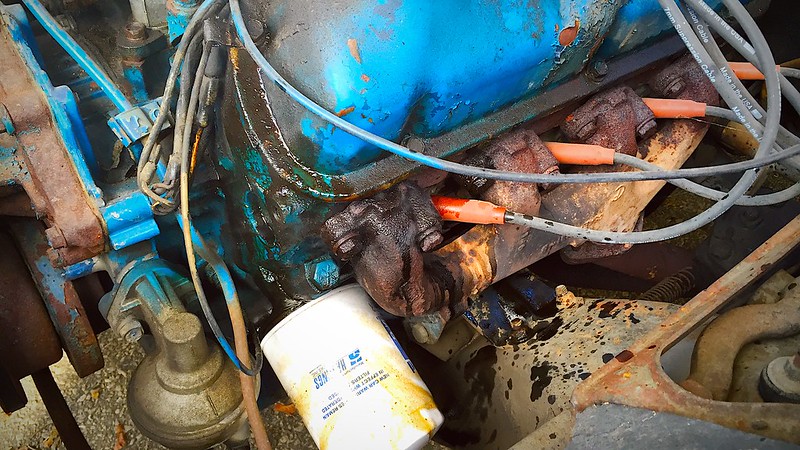 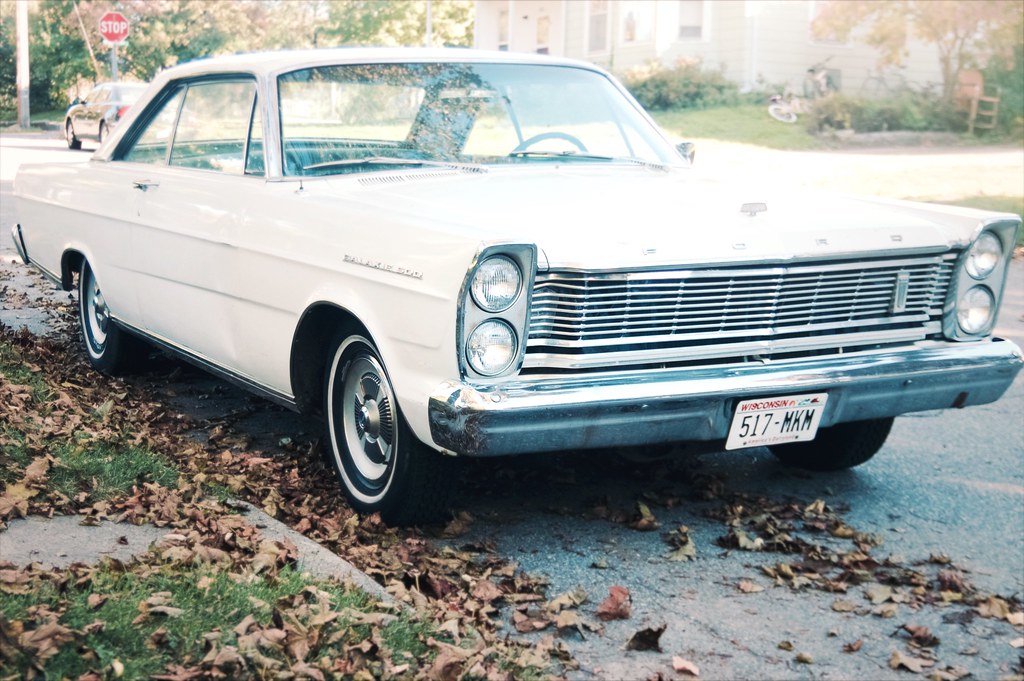 today i had an exchange with someone while i was out in the old ford ( she turned 50 years old this year! ) which amuses me because they could not that know i’ve had the exact same exchange countless times over the past 13 years.

still, after all these years, i’m not quite sure exactly what they mean. i know it’s a compliment of some sort, i’m just not sure what sort it is 🙂

nobody ever says, “you know i really like your cool car. it’s sooooooo, you.” that’d be easy to interpret ( and even easier to dismiss as untrue ). i’m probably reading too much into it, but i get the impression from the repeated exchange that the galaxie says something about me that i don’t understand. “do you want to ship the chest freezer to your house?”

“i think it’ll fit just fine. in fact, i bet there will be plenty of room to spare.” for over a year this photo of me has been hanging in the organic valley headquarters near the coffee station where i used to get coffee every day before the fire. the photo was taken right before i started running again, before i ran clear across the country and before i lost 110 pounds. so, it’s a good reminder to not let that happen again.

a little birdy told me that the picture was coming down to make way for a new one, so i thought i’d proactively “steal” the picture and put it somewhere where it might be appreciated. i knew i wanted to put it up in our post fire work digs in westby but i couldn’t put it up in my office because, well, that’d be weird, right?

aha – i found the perfect spot in our executive marketing director’s office! i just know lewis would really enjoy having me looking down on him at his desk.

and if he ever wonders what do to, he can now just look up and ponder, “hmmm, what would eric do?”