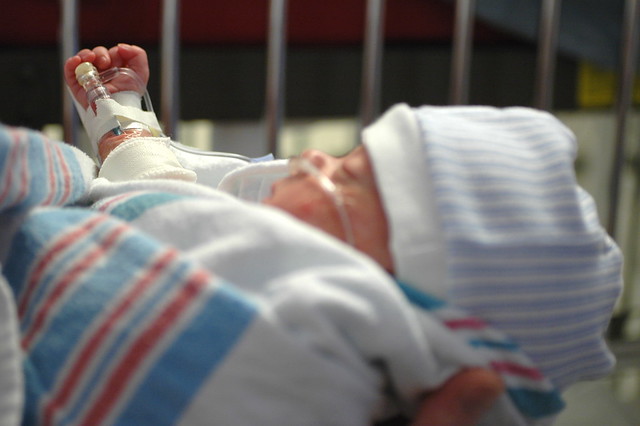 little odin is relaxing before his ROP surgery. he’s had an intravenous line inserted into his arm which will allow his caregivers to give him fluids and the drugs which will put him into a state known as “conscious sedation”. 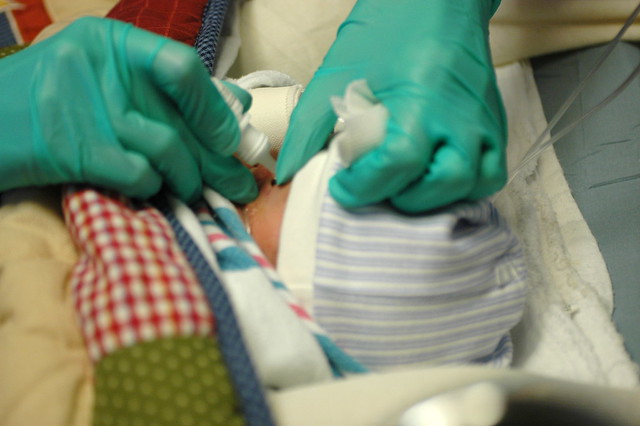 nurse maureen is applying the drops that will dilate his pupils. while he tolerates the first application of the drops quite well, he lets everyone know after the third round of drops that he’s had enough. 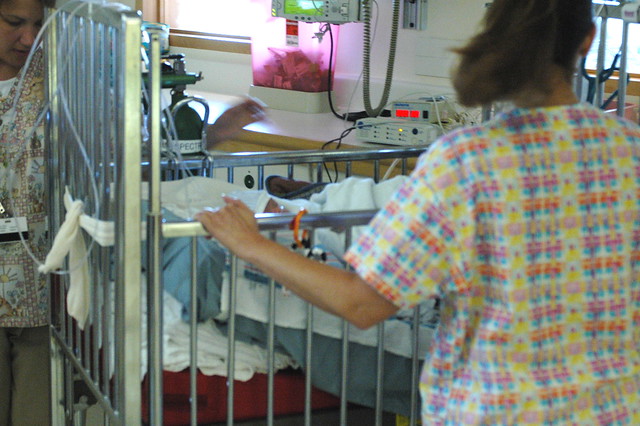 it’s 4 p.m. eastern time u.s.a. which means that it’s time for him to get rolled down the hall to the surgical room. 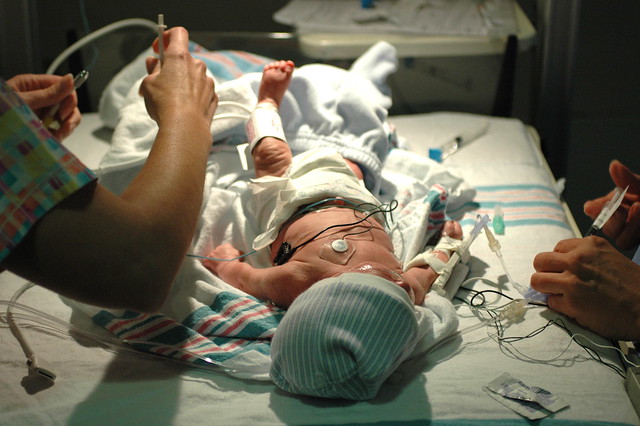 they’re prepping him for surgery by simultaneously removing his clothes, attaching a blood pressure cuff and injecting him with ketamine and versed which are the drugs that will hopefully keep him calm during the procedure. 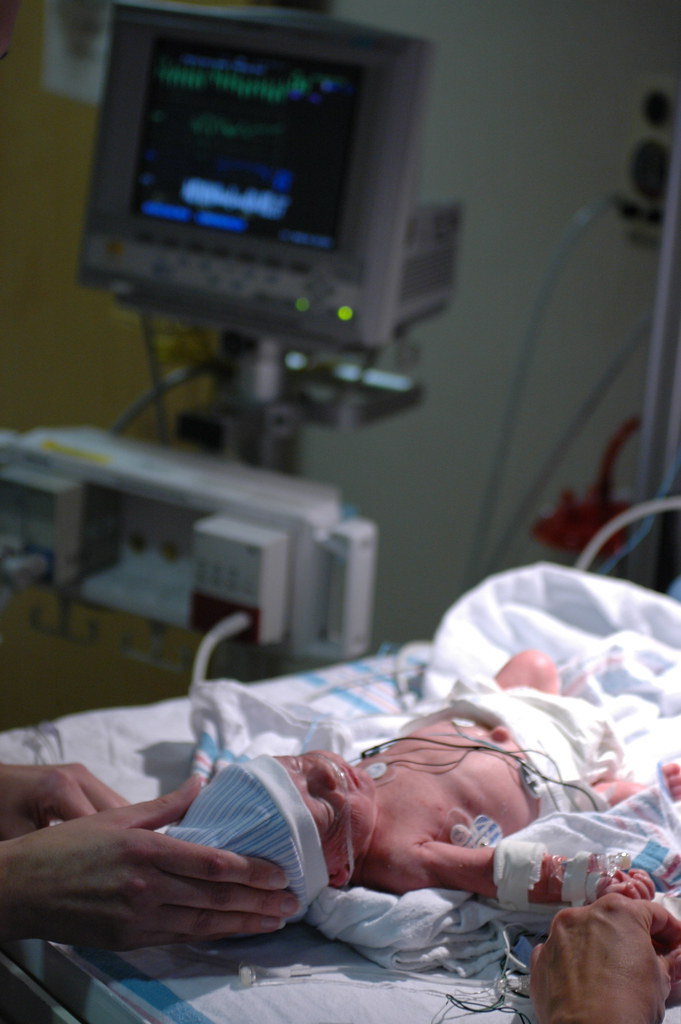 while it’s nice that the ketamine and versed allow him to have the procedure without being “intubated” and put on a ventilator, he’ll be so relaxed that he’ll forget to breath, so they’re watching his vitals closely. they warn me that he’ll have a few “deep” apneas ( forgetting to breath ) and they’ll have to revive him via a “bag” ventilator. 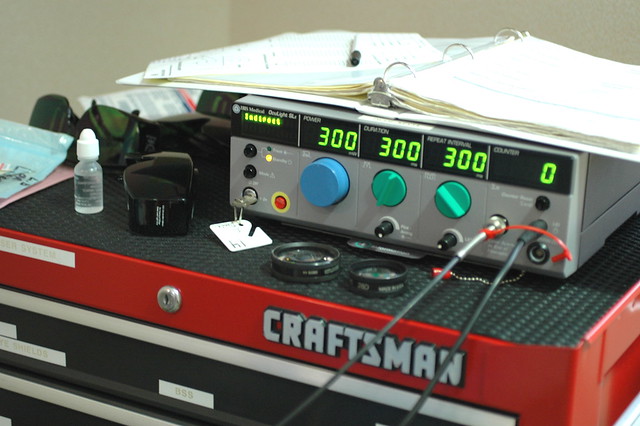 in case you were wondering, they do in fact keep all the laser equipment in a craftsman toolbox. 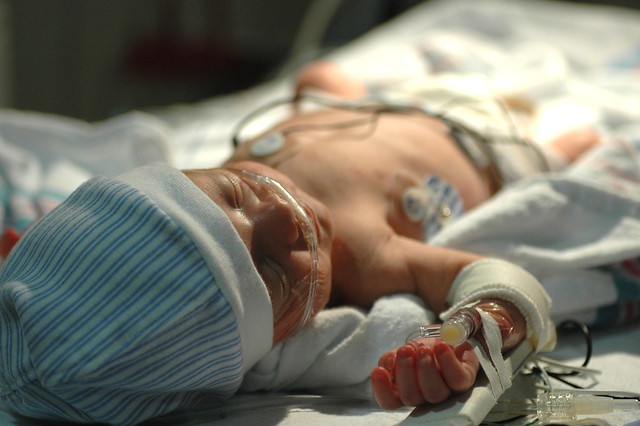 the drugs are doing their thing and he’s falling fast, fast asleep. i can’t help but wonder how many micropreemies fall fast asleep and never wake up. 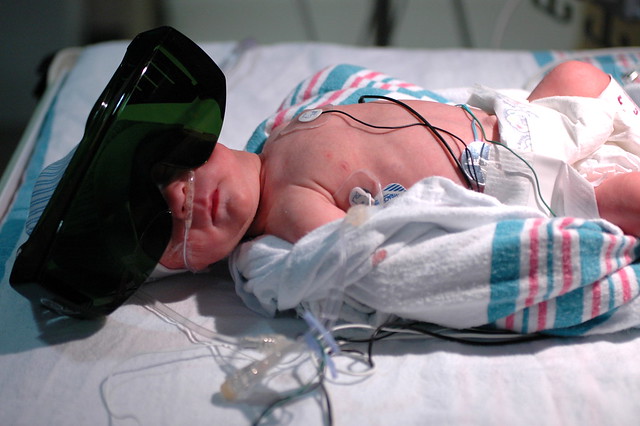 yes. when you’re waiting around for the opthamologist to finish a phone call, you might find yourself passing the time with the nurses by placing “laser goggles” on your son while he’s sedated.

hey – you find levity where you can, trust me.

soon after this picture was shot, they started the procedure and kicked me out. much to my surprise, the doctor called me back in before he was finished so i could watch the final “burns”.

he told me several times that he had never, ever invited anyone in to watch him work so i think it was quite a privilege. i didn’t get any pictures because i had to wear “laser goggles”, but it was fascinating to watch him work. years ago i used to do delicate surgical work on fruit fry larvae ( maggots!) under a microscope, so i have an appreciation for how tight the “tolerances” can be and i was grateful that dr. droste broke his personal rule and allowed me to watch him work. 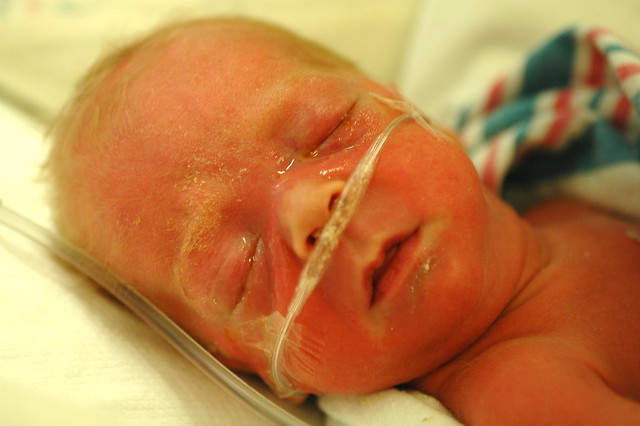 as well as anyone can tell, eric made it through the ROP surgery relatively well. he had a few deep, apneas which is a known side effect of the drugs given to him to induce conscious sedation. they warned us ahead of time, but you never get used to seeing your son turn a deep color blue as you dig your fingers into wall while they seconds tick by. i’d like to say that he’ll never have to have ROP surgery again and that he’ll forever escape any permanent damage, but we won’t have any good answers those questions for about a week.

i waited until two hours post-op to snap the picture because i think it might have been a bit too much to bear for people to see just how puffy his eyes were immediately after the procedure. he also had a severe bout of apnea at about an hour post-op so i wanted to give him plenty of time to recover after turning a deep blue color. in this picture, he’s bright red and quite flushed, which is a side effect of the ketamine.

the doctor had to make about 1,500 “burns” in each eye, but he admonished me to not focus ( no pun intended ) on the absolute number of burns, but rather to note the overall “take rate” which indicates how many of the burns were effective. he likes to have a take rate above 90% and unfortunately, he said that eric was more “challenging” than he had anticipated and thought that he had a take rate closer to 80%. the lower take rate was due to the fact that eric’s lenses are cloudy because of a normal developmental process that should resolve itself in a few weeks; the cloudiness makes it difficult for the laser to make effective burns. he was able to get the take rate that he got only after turning up the power of the laser, but he can only turn the power up so far before risking collateral retinal damage. 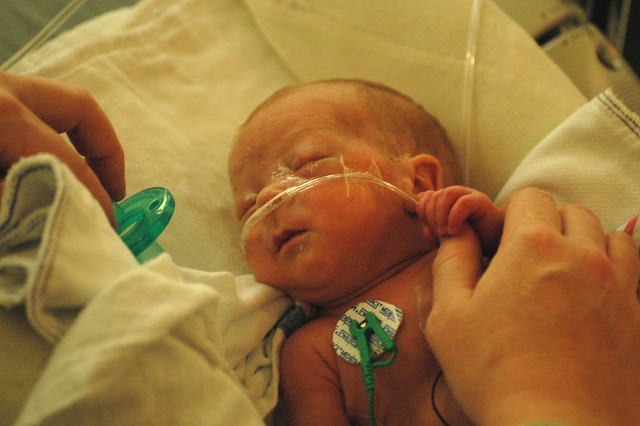 he noted that the disease had progressed since even yesterday and the plus disease ( the really dangerous part ) was a little more moderate that he liked to see and that there was still a 30% chance that he’d need additional surgery. but he didn’t think eric would have any problems recovering quickly and said the he could have the hernia surgery tommorrow for all he cared ( each time he talks with us, he changes his story about how long it’ll take to recover, so i’m guessing he’s doing his version of managing our expectations ). so it looks like we’ll be moving quickly on to learning all about hernia surgery and back on schedule for a release.

many, many thanks to everyone who showed their support in whatever way made sense to them. rop surgery is relatively routine as far as nicu surgeries go, but new intravenous lines, dilation drops, “conscious sedation” drugs and high-powered lasers all provide many opportunities for things to go wrong. certainly versed is nothing to fool around with and having used ketamine in the past to put rats under before i removed their hearts ( don’t ask ) i know how, er, challenging it can be to dose correctly. small changes in body fat and metabolism can radically alter how long it lasts and we’d often have rats waking up in the middle of the operation. in fact, the doctor implied how difficult it is to dose accurately by stating that he gets done when the kids starts to move. in any case, it means a lot for us to see so many people in his cheering section.

in the photo, it’s about 4 hours post-op and he’s just started to stir as the drugs wear off. of course, mama is close by, ready to console him.