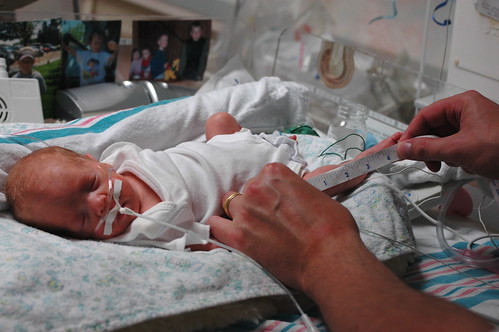 jeez, louise – the kid can put on the weight. he added another ounce over the night and is now 1625 grams or 3 pounds 9.3 ounces. he has also added a half centimeter to his length and he’s now 42 centimeters or 16.53 inches. it’s just astonishing that he’s added four and a half inches to his length since birth, which is just about the the length of his entire leg! wow! 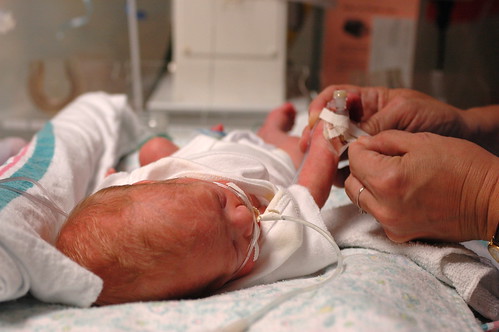 in other big (ahem) news – eric started the day on 17 cc’s of breastmilk every two hours and we were mighty surprised when they decided to see how well he could tolerate a whopping 3 cc increase in the afternoon ( remember, up until this point they were increasing his feeds by one cc in the morning and one cc in the evening ); 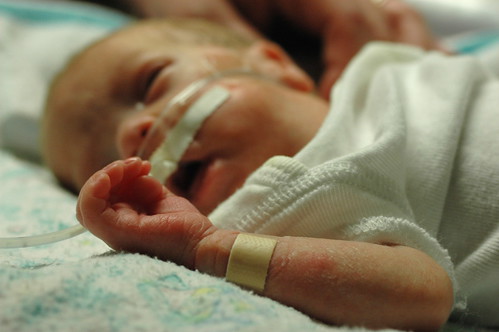 amazingly, with the IV line gone, eric only has one major piece of equipment left – his nasal cannula.

so at noon they started feeding him a 20 cc’s of the good stuff every two hours! of course, being the champ that he is, he digested it just fine and they didn’t find any increase in undigested material sitting in his stomach. diligent readers will remember what happens when he hits the 20 cc mark; that’s right, he’s on “full feeds” and doesn’t need any supplemental nutrition so his intravenous line was removed! he’s IV free! once less entry point for bugs! whoohoo! 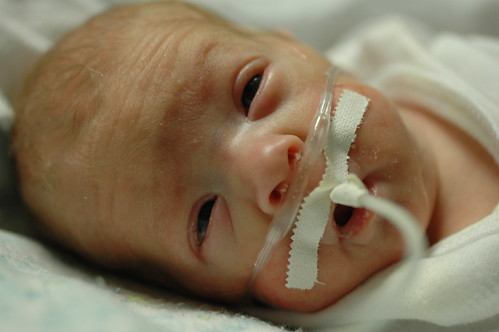 i sometimes wonder if he believes that all dads have a camera lens permanently affixed to their heads.

in even bigger news, after a week of non-nutritive suckling ( or, as the nurses like to say, “window shopping” ), eric decided to latch on and get a mouthful of milk! he didn’t really know what to do with the milk and looked a little surprised, but it’s another big, big step on the way to feeding like a big boy. 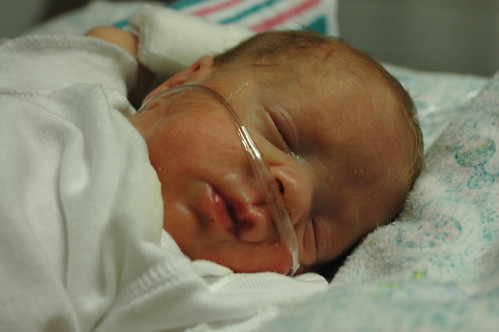 eric briefly has his feeding tube removed, which means we get a glimpse at his upper lip without tape! i don’t think i’ve seen a cuter upper lip, but maybe i’m biased.

i could be mistaken, but his lip seems to be curled into an elvis-like pose. 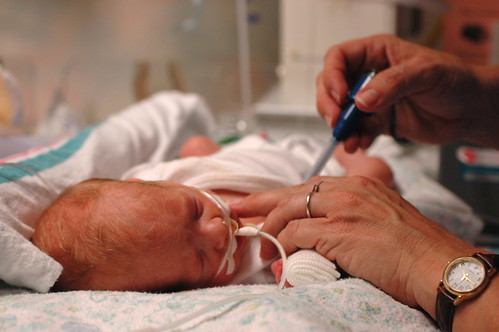 there’s nothing extraordinary about this picture of eric getting his temperature taken; i just realized that i had never captured how sweet the nicu nurses are with eric.

in this pictures, nurse cindy is taking his temperature and while she talks very soothingly to him, she gently strokes his cheek.

she’s not just doing it for our benefit, she does this kind of thing with all the kids regardless of whether or not their parents are present.