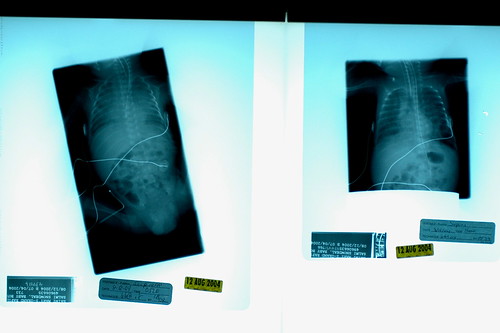 in the new world that kris and i live in, the world where things can go from good to horribly bad in three hours and we’re constantly trying to come up with new and innovative strategies to prevent us from turning into the weak-willed people with the small brains who run shrieking into the burning wreckage, it still would have been impossible to predict ahead of time exactly how we’d react to a 6 a.m. nicu phone call that resulted in us discovering that eric had been diagnosed with pneumonia, mere six hours after being told that his clinical picture was improving.

instead of shrieking, we found ourselves confusedly attempting to discern the implications of the cruel laws that we apparently must learn to abide by in our new world. “but you said he was improving?” kris queried. “oh, he is!” the caller stated, perhaps a bit too emphatically. i pondered what we should prepare ourselves for if he really starts improving. slowly, we discovered that, occasionally, the progression of pneumonia is such that you really can start improving before you ever get diagnosed as having the condition. in other words, the classic hazy x-rays which conclusively indicate pneumonia can appear after you’ve already started to gain ground on the bugs that cause the effect. so he was improving, in terms of his blood count differentials and other immunse system indicators, but our mistake was in believing that by using the word “improving” the staff really meant that eric had escaped getting another diagnosis put on his permanent record. apparently we were wrong. 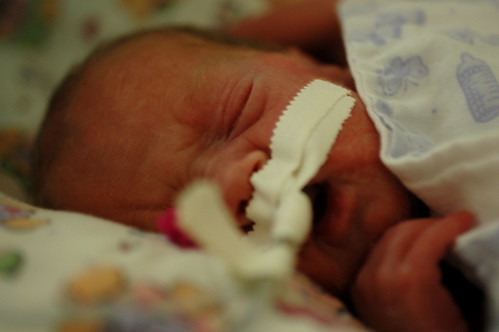 getting the pneumonia diagnosis is quite normal for a micropreemie, as nurse donna’s unscientific estimate was that 90% of babies born prior to 28 weeks get the condition ( incidentally, i suspect that a micropreemie parent can’t not begin to hate to hear the various trials and tribulations that their child must suffer through described as “normal”. ), and 50% of children born so soon will develop pneumonia more than once during their stays at the nicu. since eric’s lung x-rays indicate that his lungs are already beginning to recover, i suppose we need to focus on the fact that things could have been much, much worse. even so, barring any complications, eric probably won’t fully recover from pneumonia for 2-3 weeks. while he likely won’t need to be on the vent for the entire time, we’ve noticed that the staff has stopped making predictions as to when he’ll be off the vent.

it’s hard to imagine what tomorrow will bring.

oh. and in an attempt to accentuate the positive, i should note that eric weighed in at 1075 grams or almost 2 pounds 6 ounces.

update: in my tiredness when i posted this last night, i forgot to mention the highlight of our day – the arrival of two pounds of rowena’s pound cake with “curd” sauce that my sister candy sent to celebrate eric hitting the two pound mark! it was a very sweet gesture. literally 🙂

candy mailed the pound cake to my home ( she’s family, so she gets to do that ) and i cleverly took it to the nicu right before the shift change, so that both the day and night shifts could enjoy the gift ( bonus points for me! ). i can say without a doubt that everyone enjoyed the cake.