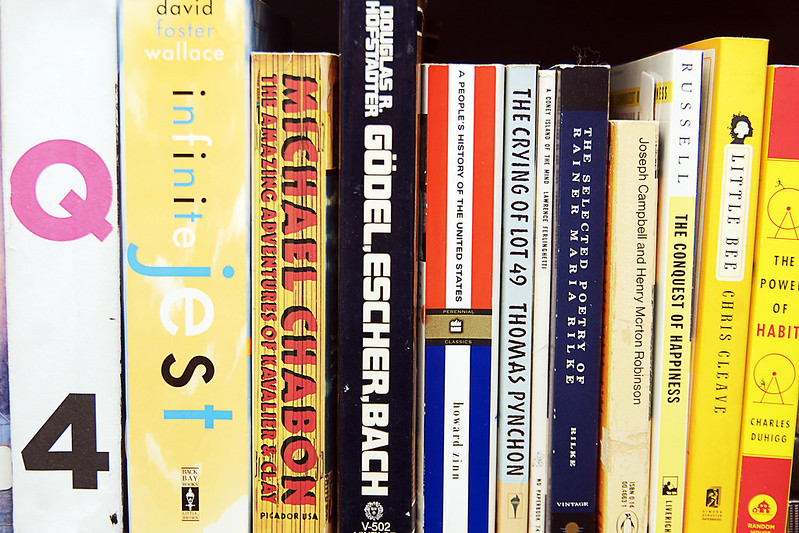 the award for book I’ve owned the longest, and most repeatedly attempted to read but never finished without a doubt goes to “Gödel, Escher, Bach”. i think I’ve had in for 30 years. attempts to finish, maybe a dozen.

i could possibly convince myself to read it while watching the MIT opencourseware lectures videos that accompany the course “Gödel, Escher, Bach: A Mental Space Odyssey”.

the new york public library published it’s first ever 100 Great Children’s Books ( they are, of course careful to refrain from calling the a “top 100” list ). it’s a superb list and we’ve read many of them with odin but it’s tough to take a children’s book list seriously that doesn’t contain “the wind in the willows”?! i bet odin would have fun writing down his top 20 or 30.

i’m always happy to hear what books you all like that are appropriate for a 9 year old. right now odin is tearing through percy jackson series. it’s not pulitzer prize winning fiction, but he loves it and that’s all that really matters 🙂

update: i received many excellent suggestions we’ve read quite a few but several we haven’t including, “Guardians of Ga’Hoole”, “The Famous Five” series, “The Prince and the Pauper”, “The Cricket in Times Square”, “The Cat Who Wished to Be a Man”, “the mouse with the question mark tail”, “george’s secret key to the universe”, and the “myth-o-mania” series. i’m curious whether i’ll enjoy infinite jest as much as i did 15 years ago (wait, what?)? of the many reasons why i love living where i do, one is discovering a neighbor brought over a stack of favorite books she read to her children when they were odin’s age just ’cause it’s the neighborly thing to do.

and the best part is that they all look like really good reads.