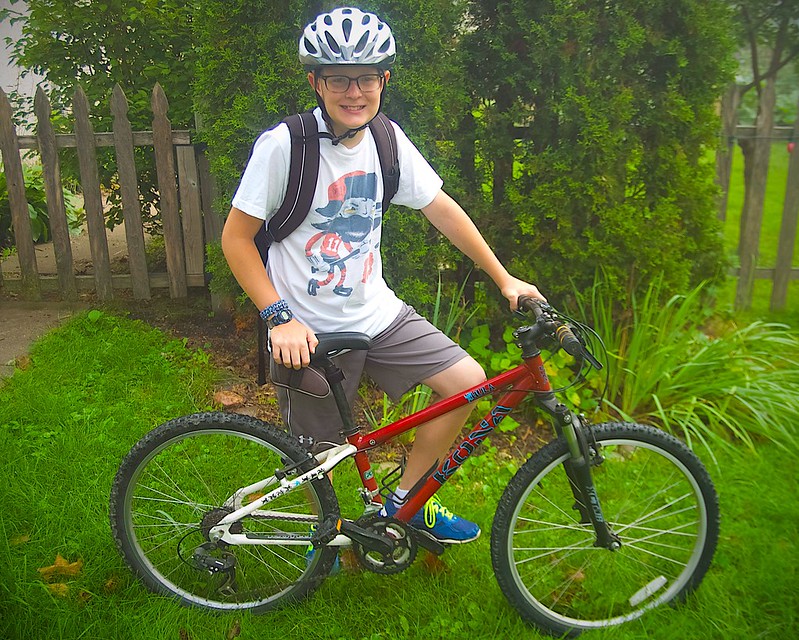 big day for odin today. it was the first day of fifth grade and after years in the local waldorf school he had his first day at public school and loved it. we’re still very big supporters of the waldorf school and couldn’t say enough about how central the experience has been in developing the wonderful, caring boy that he is today. to use a hockey analogy, this is about skating to where the puck will be.

in the morning he was appropriately nervous and while a little bummed to not be able to wear his contacts ( NEW SCHOOL! NEW LOOK! ) since he washed one down the shower drain the night before and we don’t have backups yet ( *cough* someone might have told him not to take a shower with his contacts in *cough*. lesson learned the hard way. ) he was taking it in stride.

he traded his half block walk for a half mile bike ride or walk. i don’t him i’d be more than happy to walk him to school, all the way to his locker and give him a hug as he walked into his class.

with a little glimmer in eye he said, “no poppi, that’s o.k. i can get to class by myself.” when i was growing up i always extra enjoyed having a may 25th birthday because it came just around the time the school year was ending and the unofficial start of summer, memorial day weekend. all kinds of awesomeness happening all at once.

now, my approaching birthday reminds me that odin is almost done with another school year, ending his Kindergarten Years, and i’m another year older ( and certainly not getting any younger ).

which is all good. it is The Way of Things. though i sure wish i could bottle of the feeling of walking together to school with odin nearly every day of The Kindergarten Years.

he still wants to hold hands, for now. when he’s not riding his bike. one of the many endearing things about odin is that he’s remarkably simple in his christmas list. there are no requests for this trendy toy or that video game console. rather, on his short wish list for santa was a set of winter tires for his bicycle. since he went through the effort to earn it all by himself, he suuuure wished santa would bring him some tires so he could keep riding all winter long. he saw some pretty cool blue and red tires at bluedog and thought they’d look mighty sharp and would be much more fun than regular ol’ black tires. and perhaps with a patriotic inspired bit of color coordination, he thought the red and blue would go well with the white color on the bike frame.

of course, on christmas morning odin sure was happy to see santa had brought him ones just like he was looking for! i don’t know it for a certainty, but i think santa’s keen on gifts that encourage odin to get outside and play. i had some trouble performing the tire switcharoo ( isn’t santa supposed to perform some magic and already have put the tires on the bike by the time odin arose from his slumber? ), so odin launched into an impromptu cheer to help over the hurdle by sing songily chanting, “you can do it! i know you can! my poppi can do anything!” odin also asked santa for a balaclava for winter riding which is an excellent request since the multifunctional headgear allows you to keep your face warm while allowing you breath freely through your nose and, most importantly, you can still put on a bicycle helmut over it.

odin didn’t ask for it, but santa threw in a new, stylish matching winter coat because, well, santa just does that sort of thing sometimes. now kris and i just need to get get ourselves some snow tires and we’ll be ready to hit the snowy streets family style!