forget cubic yards or other boring measures, i think the world should immediately adopt the Galaxie Trunk (GT) as their standard unit for measuring volume. maybe even somebody at nist would be more than happy to fund me to convert everything into GTs.

for example, two sets of golf clubs is equal to about 0.20 GTs. i wonder if the morgue would let me see how many dead bodies equals 1 GT?

in any case, i’m off to the upper peninsula which always has the potential to be a unintended adventure. so wish me safe travels 🙂

honestly i didn’t think too much of driving the galaxie alone without a cell phone through rural wisconsin and michigan. that is, until somebody looked at me as if i gone absolutely mad when i casually mentioned the plan. i guess one person’s fit of insanity is another person’s relaxing ride through the countryside.

unless it involves walking 20 miles to a service station. 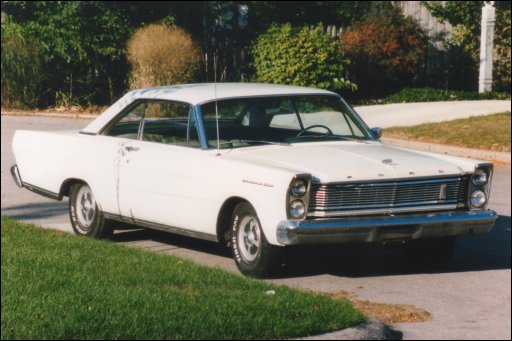 that i purchased back in august.

i think there may be only a handful of friends and family that know that i bought the classic muscle car, and i’m not quiet sure how it failed to make it into my online life.

perhaps it’s because i originally intended to “flip” the car for some easy money and didn’t think i was going to invest that much mental energy in it. i figuratively “stole” the car from a co-worker whose family had owned the car since it was purchased in ’65. when he said he wanted to get rid of the car, which was sitting risking neglect on their napa valley property, i was smart enough to say i’d pay to ship it back to michigan. i was pretty sure i could sell it for more than what i was paying, so i jumped on the opportunity.

– i’ve never considered myself a “car person”. much to the chagrin of my dad, i’m all about automobile pragmatism which usually means buying foreign – mazdas, toyotas and vws have all been parked in my driveway. and after years of owning a toyota camry, i was completely unprepared for experience of driving the galaxie.

well, the very first experience was trying to get used to the “three on the tree” set-up where the the manual transmission is shifted on the steering column. but five minutes later, as i pulled into my driveway, i had what would end up being a commonplace experience – someone freaking-out over the car. in this case it was a couple of construction workers that tripped over themselves to get a closer look.

little did i know that there’s a whole different world out there. a world of people who will yell out their minivan window, while you’re driving down the highway that their first car was a galaxie. people with large, black muttonchops and blue coveralls that will bolt across the parking lot with their girlfiend in tow, just to get you to open the hood. people that will ask you if they can buy your car while you’re idling at a light. people that stop the flow of traffic to jump out of their idling car to ask you when you’re exiting a conveniece store where you get parts because it just so happens that they bought a ’66 but it doesn’t have a seat and “no shit” that’s the original seat, i’ve never seen a ’65 galaxie seat in such great condition.

of course, i can’t just get rid of the car now. there’s a whole winter’s worth of work to done on her. maybe a new gearbox. maybe i’ll put in “doolies” [ duel exhaust for the unitiated ].

who knows, but i hear this is how it starts. it’s a disease that strikes the unsuspecting and if i don’t keep it in check in ten years i’ll have cars in various states of reconditioning up on blocks in the front yard.