i remember soon after odin ( née eric snowdeal iv ) was born almost 16 weeks early his doctors told us gravely that if he lived the first week the single greatest threat to survival was hospital-acquired infection and even worse antibiotic resistant acquired infection. sure enough within 2 weeks we were already dealing with bugs in his system. luckily for us, and odin, he survived. many are not as fortunate.

so whenever i see news on antibiotic resistance, it’s very personal. and i really can’t imagine what it’s like in a neonatal intensive care unit 9 years later as the situation continues to worsen.

frontline is doing a piece positing the question, “has the age of antibiotics come to an end?” prompted by the cdc sounding the alarm and warning “urgent health threat” and “potentially catastrophic consequences”. more people die in the US each year from antibiotic-resistant infections than from HIV/AIDS. every year. i don’t even want to know the exact number of premature infants that die every year.

the national organic standard does not allow antibiotics use in the production of organic foods.

please folks, think about the choices you make and the implications they have. there is a high cost to cheap food. 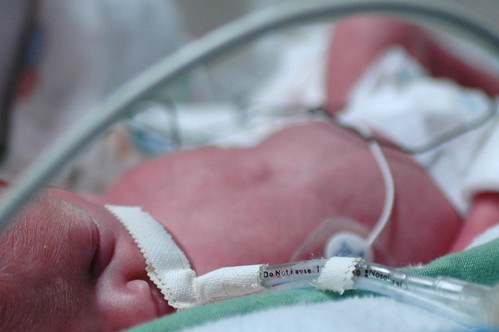 i think eric is enjoying dragging out the drama of doubling his birthweight. he was up 10 grams today, topping the scales at 1270 grams or 2 pounds 12.8 ounces.

we finally received word on his patent ductus arteriosis and it’s almost amusing – it’s not closed, but it’s not open wide enough to warrant additional measures to try to close it. although everyone seemed quite confident that it would close on its own, it’s still slightly disconcerting to not be able to give a definitive answer to the innumerable questions regarding the status of the hole in his heart. i didn’t follow up as rigorously as i might normally as to why they weren’t going to pursue another round off indomethacin simply because everyone seemed so confident that the hole wasn’t big enough to have any physiological consequences and that it would close on its own accord. 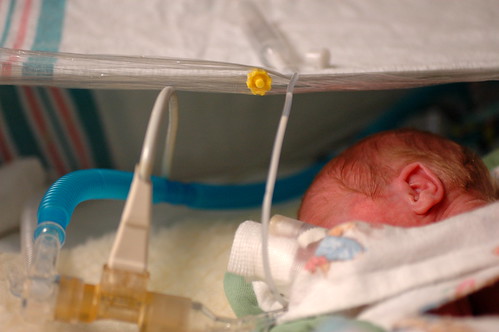 unfortunately, i don’t have any good an answers as to what may or may not be the source of his sepsis ( if, in fact, he does have a blood infection ). remember, they caught a gram negative bug in a blood sample that was being used to determine if he had a yeast infection. they’ve been having trouble determining the exact type of bug in the sample because, as a person from “infectious diseases” said today – “fungus is funky”. in other words, they are trying to grow enough of the bacteria to allow identification in a media that was meant to grow fungus and it’s not working well. all you armchair microbiologists in the crowd could perhaps speculate as to why they can’t transfer the small amount of the bacteria they did find into a more suitable media. then again, i might have some of the details confused so it might not be worth your effort. luckily they haven’t found any bugs growing in any other samples they’ve drawn, so all this might be much ado about nothing.

we also received the results from another round of “trach aspirate” tests, which indicate if he has anything growing in his trachea ( being intubated on the vent greatly increases the chances that strange bugs will grow in his trachea ). six days ago, they discovered small amounts of enterobacter and klebsiella growing in his trachea and today they said the bugs were still there, despite being on antibiotics for nine days. the staff seem to not be overly concerned about the bugs sticking around for now. things might be different if they are still there after they finish the antibiotic regime, which will last for about 6 six more days.

oh. and his arm was quite red around the entry point of his IV line, which would strongly indicate that a superficial bacterial infection was starting. they moved the line and applied a topical antibiotic which will hopefully prevent any further complications.

i was joking with the nurses that i didn’t have any of these problems with bugs when i was a 26 weeker, 32 years ago, and that one couldn’t help wonder whether or not eric IV had the misfortune of finding himself in a “dirty” unit ( really, it was all in good humor ). aside from being continually astounded that i survived the ordeals of being a micropreemie in 1972 ( indeed, one nurse commented that when she started in the nicu at about that time, they would have never tried to save a 28 weeker, little less a 26 weeker ), the nurses all remind me that we can thank indiscriminate usage of antibiotics for causing all the “bug” problems that are seen in the modern nicu.

so think about the micropreemies the next time you jump for the medicine cabinet to grab an antibiotic for a minor ear infection.