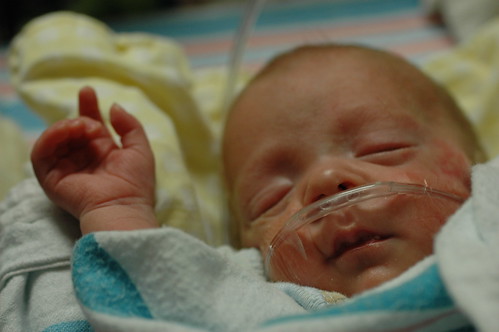 a micropreemie mom once told us to never let them know that they’ll be going home soon because they’ll always find a way to prove you wrong. “don’t tell them until they’re strapped into the car seat.” she said.

just yesterday, standing next to eric’s bed, his neonatologist wanted to remind us just how remarkable eric was doing and said with a beaming glint in eye that he had never, not once in his 27 years of practicing neonatology, released a 24 or 25 weeker before their original due date.

“but eric definately won’t be here in two weeks.”

none of us could imagine just how true that statement could be and yet still be so wrong.

this morning, after weeks of passing his retinophathy of prematurity tests with flying colors we discovered that the disease has appeared and in progressing much more quickly that is normal. unfortunately, it’s progressing so quickly that he will need to be transferred to a specialized facility on monday ( originally they were going to transfer him on sunday, before i doth protest too much since that also happens to be, cruelly enough, the date of our baby shower ) to prepare for eye surgery. he’s back on the nasal cannula and supplemental oxygen because it can help slow the progression of the disease before surgery.

in a staggering bit of randomness, he initially passed his exam today and as the eye doctor was leaving he decided to put fresh batteries in the light he uses to shine in odin’s eyes. fresh batteries and a brighter light revealed the seriousness of the situation.

while i had expected him to develop some form of the disease since it’s so common in micropreemies, nobody had expected it to get this badly this quickly, considering the nicu’s otherwise stellar track record of ROP outcomes. you know it’s a shock when even the nurses start crying.

perhaps even more devastating than the news of the surgery itself – the eye surgeon told us to not expect him to come home for about 6 more weeks.

veteran nicu parents know that this is a classic example of one of the last exciting twisty turns on the micropreemie rollercoaster, but that doesn’t make it any easier when your right in the midst of the ride.