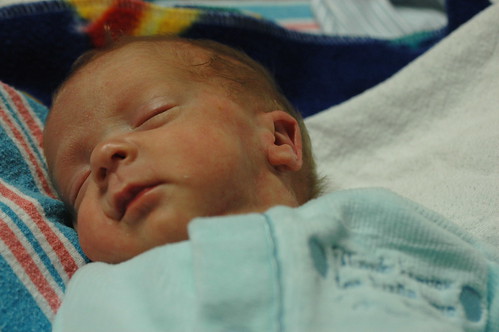 he’s still breathing on his own after 36 hours! after 72 days of various forms of respiratory assistance, it’s hard to believe that he may finally be free of supplemental oxygen.

and he’s still eating like a champ, taking all his feeds via a bottle and nursing twice a day. while his official minimum feeding requirement is 40 cc’s in 30 minutes, he seems to enjoy drinking whatever we give him and then a bit more. during his 9 p.m. feeding he drank 50 cc’s in 25 minutes! woohoo! not surprisingly, all the breastmilk is helping him to continue to gain weight and he tipped the scales tonight at 4 pounds 3.7 ounces or 1920 grams.

unfortunately we received the results from two lab test that are a bit of a concern and could potentially delay eric’s release from the nicu. first, after two weeks of watching his elevated “direct bilirubin” level closely, it’s not only not going lower but it’s rising, which is somewhat disconcerting because the predomominant theory being bandied about by his caregivers was that the elevated levels were related to being switched back and forth between IV feeds and breastmilk; according to the theory, after he was on full feeds of breastmilk the levels would gradually decrease, but that’s obviously not happening. 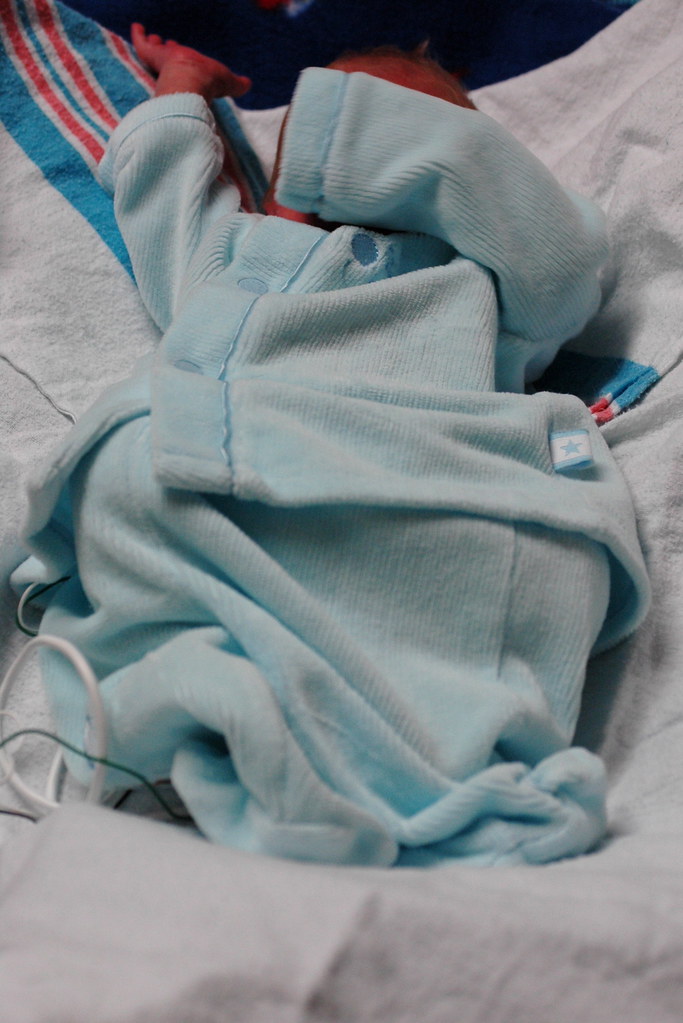 secondly, his platelet levels are dropping to dangerously low levels. a normal platelet count might be between 150,000 and 200,000 and his results from this afternoon came back at 70,000. this is such a low level that his neonatologist immediately ordered a new test to rule out a lab error. the second test indicated that his platelet count was 60,000.

the elevated direct bilirubin and decreased platelets are cause for enough concern that he’s being put on “increased surveillance” which means they’ll run blood tests more frequently ( which also means that he might need another transfusion since they need to draw blood for the tests ).

as always, there are multiple Educated Guesses that could possibly explain the lab results. his increasingly elevated direct bilirubin levels might be due to his latest blood transfusion, since transfused blood cells die more quickly than “regular” blood cells and direct bilirubin can be a by-product of the red blood cell death. his diminished platelets might be related to the fact that his hemoglobin levels were so low before his transfusion. bone marrow is responsible for producing both red blood cells (RBCs) and platelets and it only has so much capacity to produce both entities. before his transfusion, it’s possible that his blood marrow kicked the production of RBCs into overdrive and slowed down making platelets. or, more scarily, he might be getting a viral infection, which could decrease his platelet count and increase his bilirubin levels. or he could be having an adverse drug reaction to the reglan and zantac which he had been given to help control his reflux. the neonatologist told us this evening that decreased platelet counts are a known occasionally adverse effect of both drugs.

so, for the next 72 hours we’ll patiently wait for the results of his bloodwork and wait for his caregivers to put together a more coherent picture of what might be going on. interestingly, eric’s neonatologist was leaning towards thinking that the increased bilirubin was due to the transfusion and the decreased platelet count was caused by an adverse reaction to the reflux meds. if that’s the case, then we are all the more grateful that my sister, candy, quickly alerted us to the fact that both meds were potentially dangerous. a quick follow-up from regular reader and frequent commenter, katra convinced us to immediately request that the meds be discontinued. at the time that we we asked that his meds be discontinued, the neonatologist was gracious and didn’t make us feel uncomfortable for expressing our concerns, although he did make a point to say that he didn’t think that adverse events were very common. i guess we should be happy that he’s not too proud to be admitting just a few days later that the meds might be the cause of the problems.