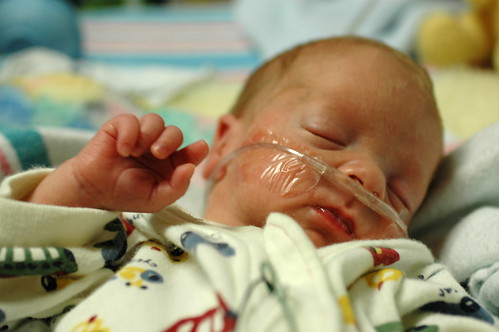 today holds the dubious distinction of being eric’s first full day as “senior preemie” or “s.p.”. the s.p. designation is given to the preemie who has been in the unit for the longest period of time. the previous s.p. held the title for an amazing 30 days. obviously, a long reign as senior preemie means that the baby has been in the nicu for quite a long time. 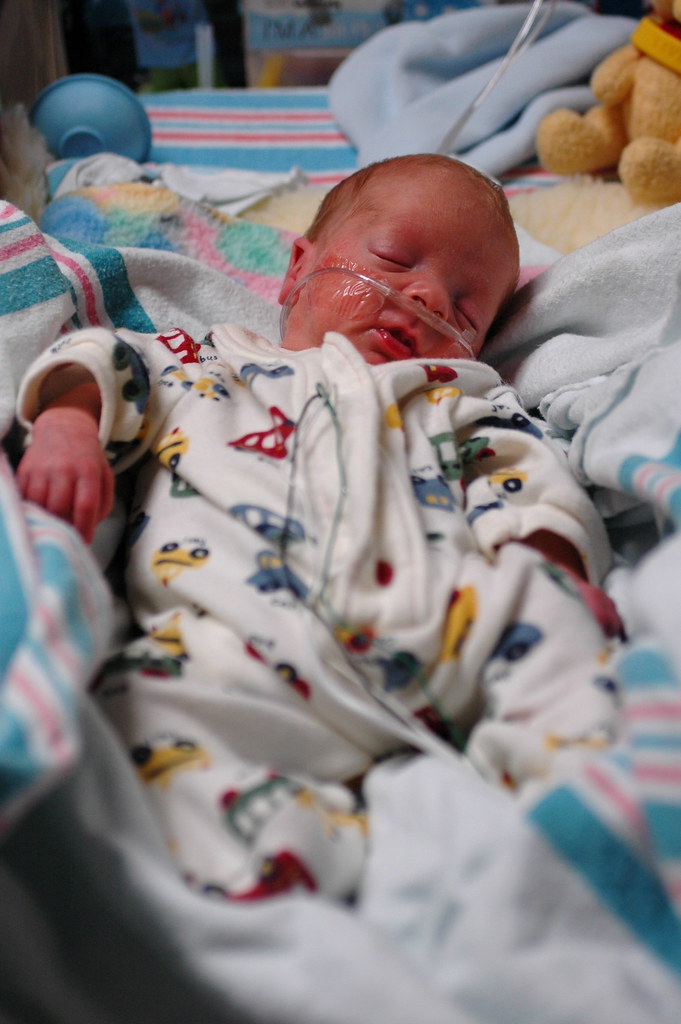 reaching the s.p. milestone is a time for reflection and it’s hard to believe that we’ve seen about 20 preemies come and go from the nicu, some left “healthy” ( mostly 32+ weekers ), some were transported to other hospitals for surgery and one died ( 24 weeker twin). nicu families will naturally look to the senior preemie and their parents for clues to how they might act and feel when it gets close to their own release date; and while this will probably sound like a pathetic plea for a barrage of sympathetic comments ( it’s not, really. honest 🙂 ), it’s hard not to feel something close to guilt when we find other nicu parents asking questions or looking in our direction as the nurses joke with us about eric guzzling his bottles or ripping off his nasal cannula.

it’s an odd feeling and not one that i suspect that many can relate to. obviously we are very, very, very(!) happy and grateful for eric’s astounding progress, but we can’t help shake this guiltish feeling. yesterday, the head nurse came up to us and asked us if we had time to talk with her over the next day or so, but didn’t indicate what she wanted to talk about. i suspect that it’s this guiltish feeling that made both kris and i suspect she wanted to chastize us for being too obnoxiously exuberant. of course, we’re fairly certain that she’s probably not going to scold us and wants to talk about something completely unrelated, but i guess it says something that we both had the same initial reaction, even as we tried to laugh off the thought.

i don’t write about it very much, but it’s increasingly apparent just how differently eric’s nicu stay could have been. the clinical courses of the other 24, 25, 26 and even 27 weekers have been very, very different than eric’s own. given how difficult our own rollercoaster has been, it’s impossible to imagine how the other micropreemie parents are dealing with their own rides and i guess that’s probably where the guiltish feeling coming from.