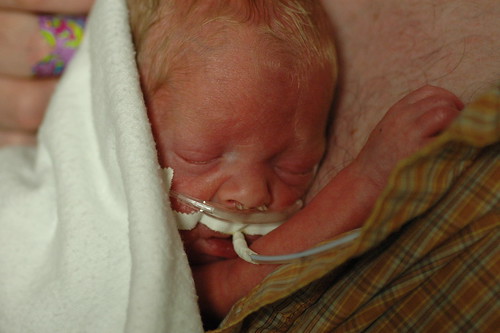 let’s all give odin a little birthday cheer, as it’s his 7 week birthday today! he gained a few grams and is now solidly in the 3 pound category at 3 pounds and 3.5 ounces. he also added a half a centimeter and is 38.7 centimeters or 15.25 inches, which means he’s added 3.25 inches to his length in the past seven weeks! woohoo! he’s rapidly being weened from the cpap and is on 6 hours of nasal cannula and 4 hours of cpap. since he’s doing so well breathing on his own, i suspect that within the next few days they’ll see if eric can go 25 hours on the nasal cannula. despite having to do more breathing on his own than ever, he’s throwing very few alarms; he only seems to alarm when the nurses are doing their “meanies” or when he’s put his head in a position that’s not conducive to breathing. his breastmilk feeds stayed the same as yesterday, as they’re pulling up more undigested food than they’d like to see, so they’re going to back off a bit on increasing the amount of milk that he’s receiving. you might remember that anytime digestion slows and milk starts hanging around, there’s an increased risk for a gut infection, so they’re just going to take things slow. 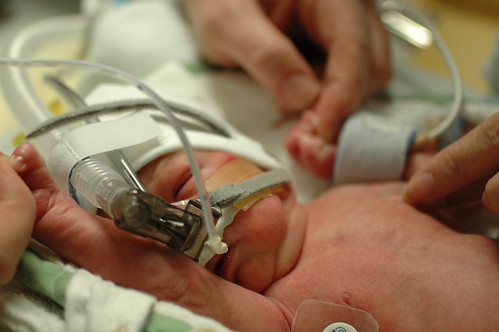 the nasal cannula needs to be taped on his face to reduce the chance that he’ll pull it out and the process of repeatedly removing the tape when he goes back on cpap has made his skin a little raw. tonight, he even has a tiny bit of flesh pull away, which he obviously didn’t care for at all; nurse peggy put little pieces of what’s known as comfeel on his face to prevent it from happening again because open, irritated sores are not a good thing when you’re enduring a prolonged stay in the nicu. 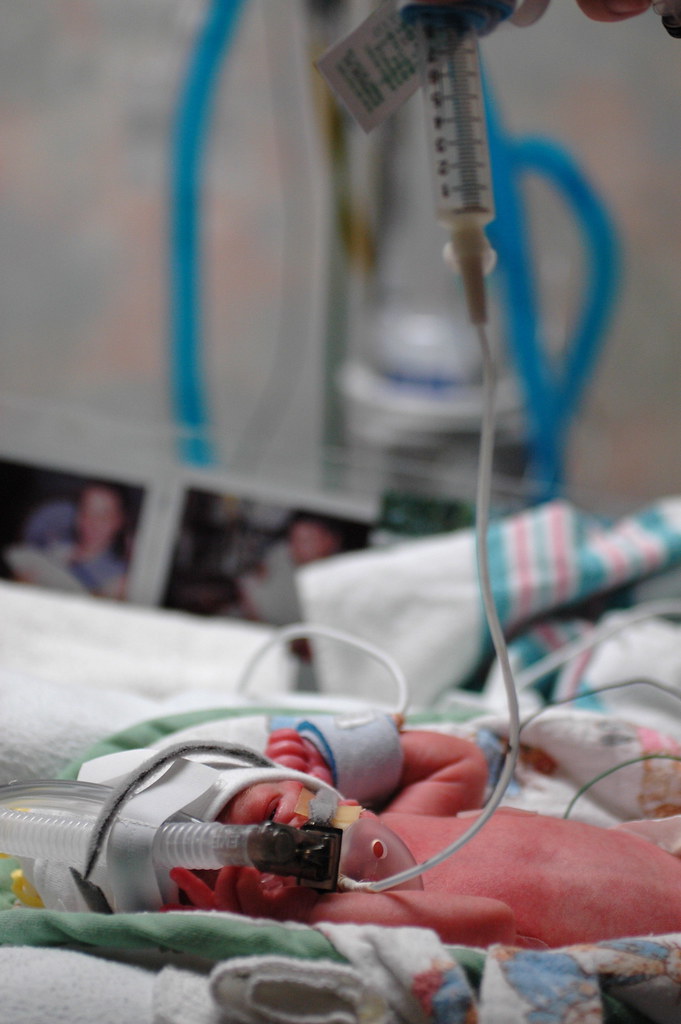 eric’s getting much better at coordinating his sucking and breathing; a mere week ago, he’d alarm when a pacifier was in his mouth for more than 15 or 20 seconds, but now he can keep the pacifier in as long as he’d like. since he’s doing so well, nurse peggy said that it’s a good time to introduce a pacifier during his breastmilk feedings so he can begin to associate sucking with feeling of food in his stomach. this is but the first step in a long process of getting his used to having to coordinate the sucking, swallowing and breathing that must occur for real breastfeeding, so it’s a big step. 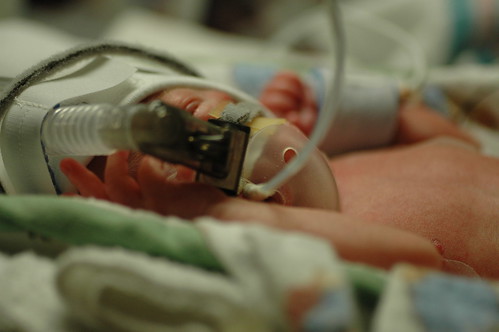 sometimes he has trouble keeping the pacifier in his mouth with the tubes in the way, so peggy has “illegally modified” the paci by notching it so that the tubes can stay where they need to stay and he can more easily keep it in his mouth. nurse peggy is thoughtful like that. 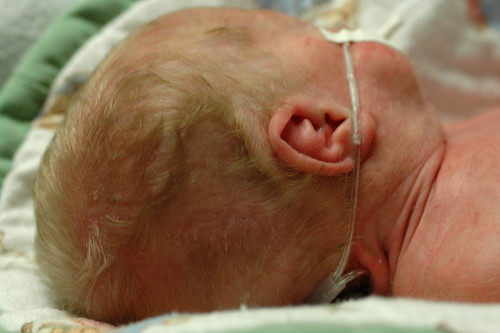 eric’s hair is getting so long that it’s growing over his ears!