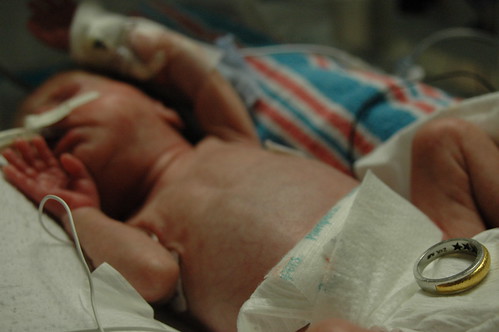 eric spent the day stabilizing. as quickly as things started falling apart, they appear to be coming back together, thanks to the fast response of his care team. he’s still on the vent, but amazingly, he’s doing so well that they they’re just letting him cruise to give him a rest while he fully recovers from the infection. his differential blood counts are all returning to normal and there’s still no sign of bowel perforation. we’ll never know what caused his skin to start to slough off. nurse debbie said it might not have even been an infection at all, but rather a circulatory issue. micropreemie skin is so delicate that small changes in circulation can cause the skin to deteriorate. 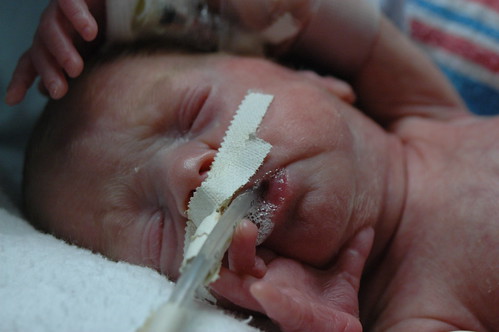 there’s certainly no doubt that eric’s gag reflex is developing quite well, as he spent much of his waking time choking on his endotracheal and od tube which releases air from his stomach. although he was relatively comfortable, it was still quite difficult to sit by his bedside and watch him gag on his tubes over and over again. they could have taken him off his vent today because he doesn’t appear to need its help for breathing, but they want to let him get a little more rest while he’s recovering from his infection. from where we’re sitting it’s hard to see how he’s able to rest while he’s gagging, but i guess that’s the way it goes. 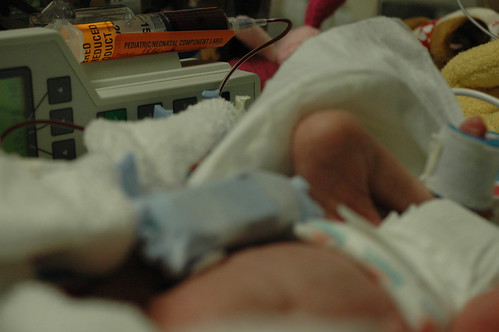 he got another 10 cc’s of blood. they are taking a lot out of him since they are running a bunch of bloodwork to monitor his infection. whatever they take out, they have to put back in. 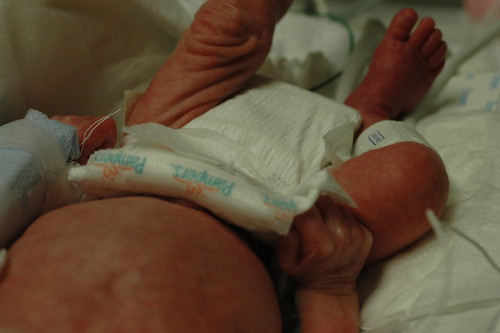 whenever they give him a transfusion, they monitor his blood pressure closely. the white cuff on his right leg is pressurized, which is making his foot red. eric doesn’t like this one bit. if you look close you can see that he’s squeezing his fist and pushing it against his thigh, while sucking a bunch of air in his belly and kicking up his left leg. 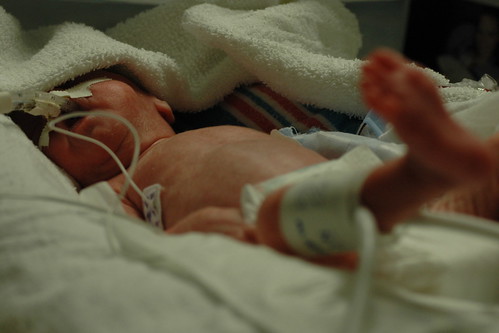 he’s wriggling his foot as if he’s trying to kick off his cuff. 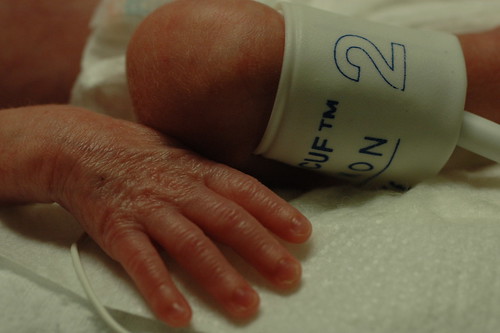 so, other than a little gagging and a transfusion or two, it was a fairly quiet day. i suspect in the next day or two, eric will be back on the cpap and start feeding again. maybe we’ll even get to start kangaroo care. 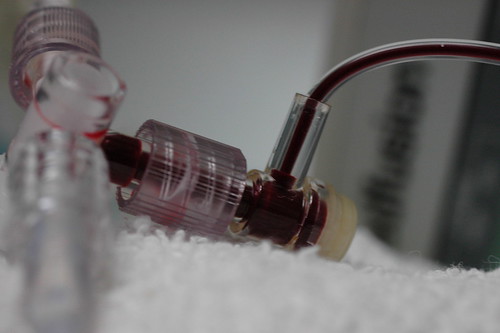 today, we also had to deal with an issue that any nicu parent faces – comparing your child to those around you. it’s one of those things that you know you can’t do, but which is basically impossible not to do. in our case, one of the new admits across the way happens to be a 27 weeker who came in at 1 pound 9 ounces. 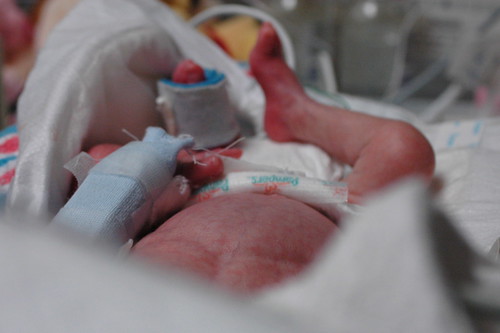 he’s aready on nasal cannula full time and graduated from a radiant warming bed to an “isolette”, which means that the don’t think that he’ll require as much intensive care as eric still requires. 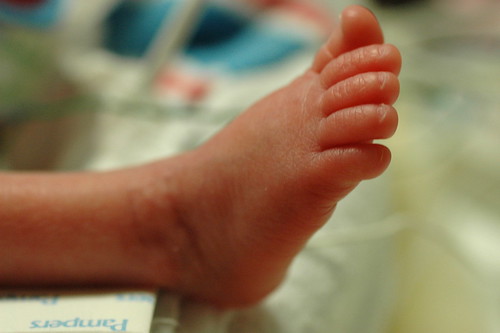 while we’re tremendously happy for the 27 weeker parents, it’s hard not to feel jealous at how much difference two weeks can make, as we watch eric gag on his ET tube.