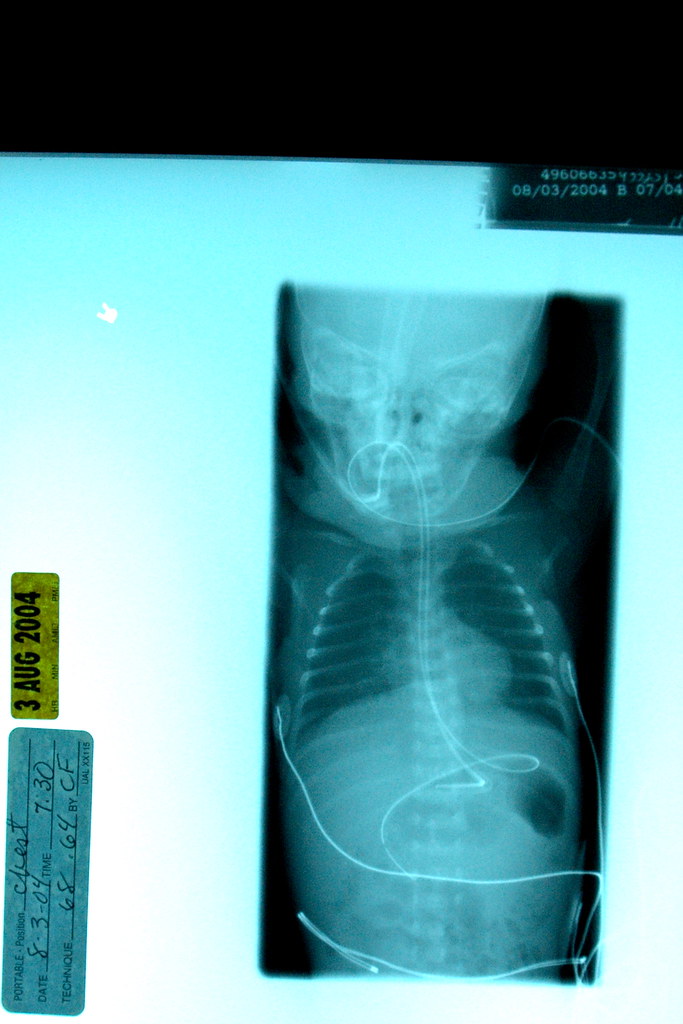 even though they put eric back on the cpap, he continued to have an “alarming” night last night, throwing an unusally high 16 “a’s and “b’s” through the night. we feared that he might need to go back on the vent, but nurse jan said it can sometimes take 24 hours for a baby to stabilize their respiration after they get pooped, barring any other complications. the strange lung sounds have stopped, which i guess is a good thing as long as they stay gone. they took a chest x-ray this morning to rule out any lung abnormalities and everything checked out just fine, which is a big relief. his blood work doesn’t show any indications of an infection, so we’re hopeful that all his alarming is just a sign that he’s telling us that he’s tired and would like a little help breathing and not something more nefarious.

they are also monitoring eric closely to determine if he what is known as an inguinal hernia. it’s your basic “bulge in the groin” hernia that a man might get if he’s lifted something too heavy and pushed a loop of intestine through a weakened muscle or an opening inside his body. in eric’s case, there’s a hole high in his groin created by the inguinal canal. it’s open and holding his testicles which aren’t even scheduled to descend until 32 weeks gestation ( which means we have about 3 more weeks to go in micropreemie time ). the hole left by the open inguinal canal can allow part of his intestine to push through the gap, which appears to be what is happening to eric. at the moment, they aren’t sure if he even has a hernia ( although it’s likely he does ), but if he does, they will hope that it remains “reducible” ( i.e. can be pushed easily back through the opening ); if it does not remain reducible, then he will need to be transported to the other nicu in town, which we wouldn’t like since we’ve become such big fans the st. mary’s nicu staff and their care. but for now it’s a waiting game, while they try to make a definitive diagnosis.

from the too-much-information department. micropreems will often get hernias because they start pooping before their inguinal canal closes, which is not something that mother nature intended, as a baby is not normally pooping in utero before the canal would typically close. the effort associated with pooping can push the intestine through the gap. such are the trials and tribulations for a micropreem.

later in the night, eric decided to finally settle in and his alarms went back to a “normal” level, which means that just might have been a little tired from all the time on the nasal cannula. 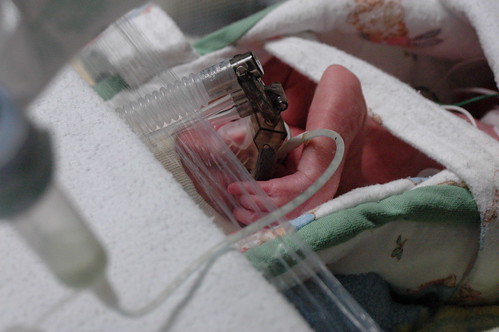 eric has a tube that is threaded to his stomach that allows air and undigested food to be pulled back out of his stomach. we don’t want to waste any of the precious breastmilk that he’s receiving, so he gets the undigested milk put back in his stomach via a syringe hanging above his bed. it sounds gross, but i really don’t think he minds too much. 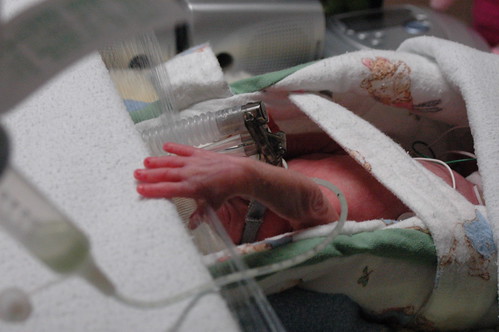 he doesn’t need the plastic wrap above his bed to help him to regulate his body temperature anymore, but they like to put it there anyway to help him shield his eyes. at one point, while he’s getting the undigested milk, he decides to thrust his hand up and move the wrap back a bit. i imagine that he’s trying to get a better look at me as i’m taking pictures; he is briefly opening his eyes and looking at me, but i’m not fast enough with the trigger finger to capture them when they are open.