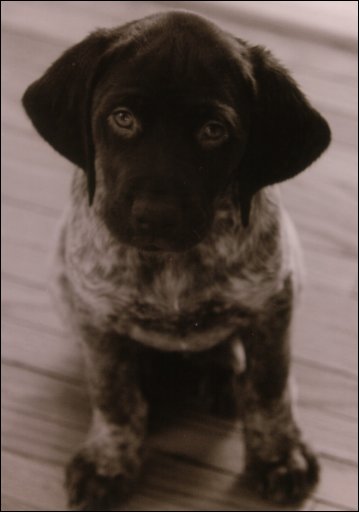 today harper went to the vet and didn’t come back. after almost a year after we discovered that
harper had epilepsy, we decided to have him euthanized.

even though i could rattle off the rationale for why it was best for everyone involved, it was impossible to stay composed as i opened the car door and let let him jump in – seeing how utterly and completely overjoyed he was at going somewhere, anywhere, in the car. turning left onto a main street, just a few miles from the vet, from the back seat harper sticks his head out the driver side window – his big, floppy ears flopping in the wind right behind my head; i catch a driver stopped at the cross street light crack a giant grin at the sight. harper pulls his head in and vigorously licks the back of my head and ear just like he always does when he’s really, really happy.

i tend to think of myself as a bit of a modern man. i do dishes. i get a little misty eyed during certain movies. i don’t think i have a problem crying in public. and yet, i was hoping that i could muster a modicum of composure while talking to the vet and her assistants. i had grand plans of maintaining a cold, clinical distance from the actual specifics of the situation. of course that’s not the way it turned out, and before i knew it i had the assistant and the vet crying.

i don’t remember much of the conversations. mostly everyone just reassuring me that i was making the right decision. that there really wasn’t anything left to do. that i somehow hadn’t put much thought into what i was going to do with his remains. that cremation really isn’t that expensive. that i had to decide if i wanted to see the procedure. that even though i’d probably regret it later, i couldn’t. that if i wanted i could stay with him as long as i wanted.

then his lease comes off and is neatly folded and handed to me, replaced with a green, cloth leash. the door opens and an assistant calls for harper in an oddly cheery tone, presumably to not get him anxious. the vet hands me his leash and says she’d like to walk me outside. we walk down the hall, as i make clumsy attempts to gather my wits. the door opens into the lobby and everyone looks up. i see the other customers slowly put the pieces together. teery man with neatly folded leash. and no dog. immediate sadness on faces and quick looks to their own dogs.

i come home and mauja is very upset at having been left out of the car ride fun. and then he looks puzzled when he sees harper’s leash in my hand. i see him quickly deduce that he’s been tricked and harper is either upstairs or outside. he runs everywhere and then gives up and decides that he’s going outside to guard his rawhide that he likes to tease harper with.

it’s natural to try to draw some lesson from all this. this wasn’t the first pet that i’ve seen killed or put down, so why was it so difficult? i think it might have been because he was so young – not even three years old – and so, so completely devoted to you when he wasn’t having seizures. his sole desire in life was to be as close to you as possible. and because of that near infinity of love that almost could vibrated from harper, you wanted to do everything you could to make him happy. but in the end, we learned that disconcerting lesson that everone learns the hard way.

sometimes everything you can do isn’t good enough. and that’s o.k.